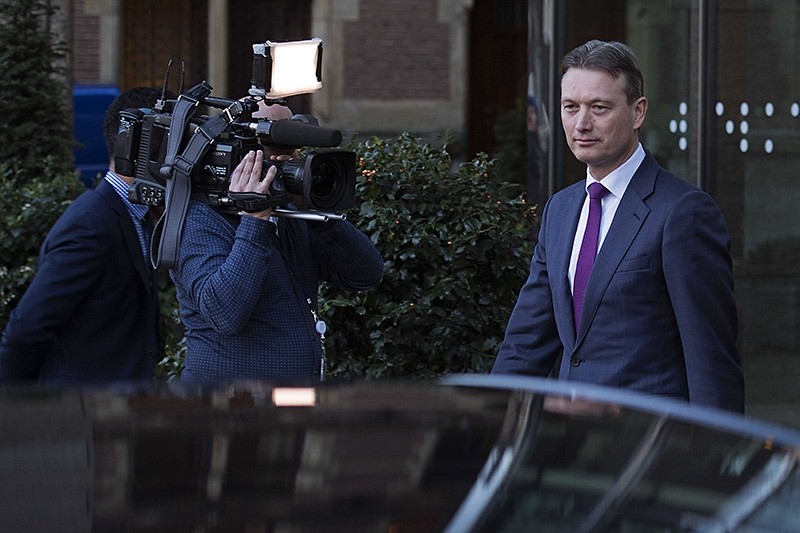 Dutch Minister of Foreign Affairs Halbe Zijlstra leaves the Dutch parliament Tweede Kamer after he announced his resignation in The Hague, Netherlands, 13 February 2018. (EPA Photo)
by Feb 13, 2018 12:00 am

New Dutch Foreign Minister Halbe Zijlstra resigned Tuesday, after admitting he had lied about his presence at a meeting with Russian President Vladimir Putin.

"I see no other option today than to hand in my resignation to his majesty the King," a tearful Zijlstra told MPs in a hastily-called session of parliament.

Zijlstra had only been in post for four months, and the dramatic events came just hours before he was due to leave on an official trip to Moscow to meet with Russian Foreign Minister Sergei Lavrov.

"This is by far the biggest mistake I have made in my career," he admitted to Dutch politicians in the lower house of parliament, watched by Prime Minister Mark Rutte.

He had been due to meet Wednesday with Lavrov to discuss among other things the 2014 downing of the Malaysian Airlines flight MH17 by a missile fired from territory held by pro-Russian rebels over Ukraine.

The tragedy in which all 298 people on board died, most of them Dutch, has soured ties, and led to accusations that Moscow is not presenting all the evidence it has to a Dutch-led criminal inquiry.

Stepping down, Zijlstra told MPs Tuesday that the credibility of the country's foreign minister must be "beyond doubt, both inside and outside of the country."

His resignation came after his claims to have attended a meeting 12 years ago with Putin in his dacha which included Jeroen van der Veer, Shell's former chief executive were revealed on Monday to be false.

"I have spoken about an incident of great importance, saying I was there in person, while that was not the case," Zijlstra told MPS on Tuesday.

"I wanted to tell this story convincingly without revealing my source was obviously the wrong choice. I should not have done it. I am sorry."

A former Shell contractor, Zijlstra had told members of his Liberal VVD party at a congress in May 2016 that he was there "in the background as an assistant".

During the meeting Putin allegedly spoke about his definition of a "Greater Russia".

"I clearly heard Vladimir Putin's answer about what his understanding was of 'Greater Russia'," Zijlstra told the audience.

Putin "wants to go back to a 'Greater Russia' and his answer was that it included Russia, Belarus, Ukraine and the Baltic States," he said at the time.

Zijlstra's appointment in October as foreign minister within Rutte's fragile four-party coalition government had raised eyebrows because of his perceived lack of diplomatic credentials.

But the Volkskrant said "his spin doctors" had used the story of the Putin meeting "to ward off criticism about his lack of foreign experience.