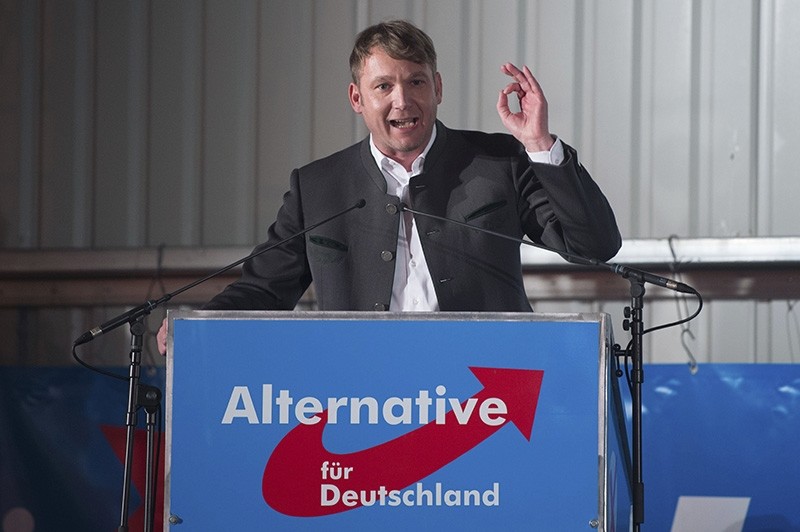 In this Feb. 14, 2018 photo Andre Poggenburg, head of the nationalist AfD in German state of Saxony-Anhalt, speaks during a party rally in Nentmannsdorf near Pirna, eastern Germany, where he insulted Turkish people. (AP Photo)
by Daily Sabah with DPA Feb 16, 2018 12:00 am

The executive of Germany's anti-immigrant Alternative for Germany (AfD) party issued a warning against one of its own members after the lawmaker insulted the country's Turkish community.

The decision to issue the warning against Andre Poggenburg, a member of the parliament in the eastern state of Saxony-Anhalt as well as the state party head, was unanimous, an AfD spokesman said Friday.

The warning comes after Poggenburg called Turks in Germany "camel herders" and "caraway traders" during a recent speech.

Poggenburg was reacting to Turkish groups who oppose the concept of a new Home Ministry as proposed in the new German government coalition agreement, saying it harks back to the Nazi era and could divide the country rather than unite it.

However, the plan is popular with the AfD, which bounced into the Bundestag in last year's elections and has seen its support only grow amid political bickering by the more established German parties.

"They want to tell us something about history and homeland? They're nuts. These camel herders should set off to where they belong, far beyond the Bosporus, to their mud huts and multiple wives," Poggenburg had said on Wednesday, criticizing Turkey for the 1915 killings of Armenians in the World War I era.

Germany's Turkish community, which represents the 3-million-strong minority, said on Thursday that it was planning to file a legal complaint against the far-right politician.

The state prosecutor in Dresden has also began looking into whether charges could be brought against Poggenburg.

"Such insults can't be ignored and accepted in silence; after all, they come from a party that is now sitting in many parliaments," Gökay Sofuoglu, chair of the Turkish Community in Germany (TGD), told the German Press Agency, adding that complaint against Poggenburg was for hate speech.

"We don't see sufficient evidence for an extreme-right ambition," said a spokeswoman for the agency on Friday.

"An influence or even steering by the extreme right can't be identified at the moment."

The domestic intelligence agency is tasked with, among other things, determining if a danger for Germany's democracy exists.