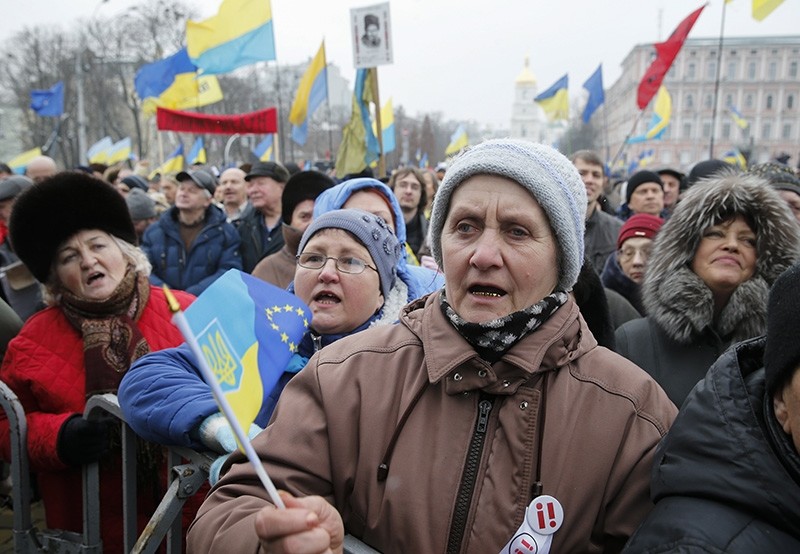 Protesters shout anti-Government slogans and demand the impeachment of President during their rally in downtown Kiev, Ukraine, Feb. 18, 2018. (EPA Photo)
by Feb 18, 2018 12:00 am

Thousands of supporters of deported former Georgian leader Mikheil Saakashvili marched through the streets of Kiev on Sunday, demanding the impeachment of the Ukrainian President.

A French Press Agency correspondent saw some 10,000 people taking part in the rally, though the ministry of internal affairs put the number at around 3,000 participants.

Protesters carried banners portraying president Petro Poroshenko with a red line drawn over his face. The demonstrators chanted "Impeachment!," "Resignation!" and "Poroshenko is a thief!"

Former Georgian President Saakashvili, 50, who had been living in exile in Ukraine, was detained by masked men at a restaurant in central Kiev and deported to Poland on Monday.

The state border guard service said he had been residing in Ukraine "illegally" and was sent to the country where he initially came from.

On Tuesday, Saakashvili gave a press conference in Warsaw and said he had been blindfolded and rushed first by van, then by helicopter to Kiev international airport.

On Wednesday an opposition leader, who is married to a Dutch woman, arrived in the Netherlands.

Kiev resident Galina Zagoruiko, one of the angry protesters on Sunday, said; "people can't stand it anymore - that nothing changes and everything just gets worse".

As many others, she had come to support a political party founded by Saakashvili.

Saakashvili, a former governor of Ukraine's Odessa region, was once an ally of Poroshenko, but then became one of his greatest foes.

Ukraine stripped Saakashvili of his passport, but he nonetheless continued to challenge the government, organizing frequent protests demanding Poroshenko's ouster.

With the help of his supporters, he broke through the Polish-Ukrainian border in September last year, and was briefly detained in December in Kiev.

Saakashvili is wanted by the Georgian government on multiple criminal charges, which he says are politically motivated.