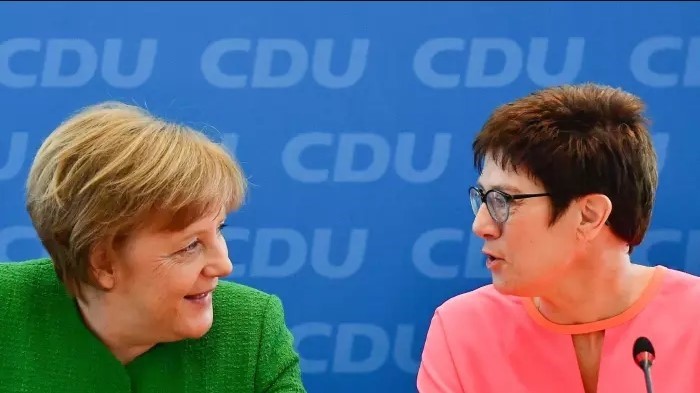 Merkel said she wants the party to elect Annegret Kramp-Karrenbauer to the post of general-secretary next Monday. The party's current general-secretary, Peter Tauber, is stepping down after facing health issues.

Speaking alongside Kramp-Karrenbauer at the party's headquarters in Berlin, Merkel said the 55-year-old Catholic would bring a lot of experience and credibility to the role at a time when the Christian Democrats are under pressure to define their political positions.

Merkel said that, after many challenges, the CDU is in need of "self-reflection" and discussion, in order to strengthen the party's roots.

Initially, Merkel said Kramp-Karrenbauer would be the first female CDU secretary-general, before correcting herself: "She is in fact the second, yes." The first woman to hold the role was Merkel herself, from 1998 to 2000.

Kramp-Karrenbauer, 55, announced that there would be a comprehensive debate within the CDU, open to all factions in the party, from the grassroots to the leadership.

Merkel thanked outgoing secretary-general Peter Tauber for his work. The chancellor also announced that she would nominate the CDU's future cabinet members at a CDU executive meeting on Sunday.

Tauber was also among those blamed for the CDU's poor performance in September's national elections, when the party suffered its worst results since World War II.

Kramp-Karrenbauer announced her resignation as premier of Saarland, saying that it had not been an easy decision. According to dpa sources, she is to be replaced by Tobias Hans, 40, leader of the CDU faction in the Saarland state parliament.

Kramp-Karrenbauer is regarded as Merkel's possible successor as party leader.

In the Saarland state elections in March 2017, Kramp-Karrenbauer decisively defeated SPD chancellor candidate Martin Schulz, with the CDU securing 40.7 percent of the vote against 29.6 percent for the SPD.

The SPD's 464,000 rank-and-file members are due to vote on the coalition by postal ballot from Tuesday until March 2, with the results expected on March 4.

If SPD members vote "no" to the deal, Germany could face fresh elections or the prospect of a minority government.