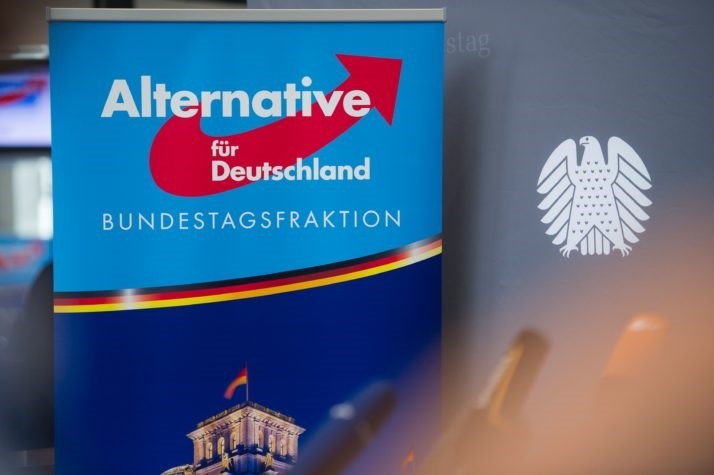 The far-right Alternative for Germany (AfD) party won seats in the German Bundestag for the first time in the September election.
by Compiled from Wire Services Feb 21, 2018 12:00 am

Germany's far-right AfD has surpassed the center-left Social Democratic Party for the first time in a national poll to become the second-strongest party, according to a poll

The Insa poll, carried out for the top-selling Bild newspaper, put the AfD ahead of the crisis-wracked Social Democratic Party (SPD) for the first time.

Support for the 153-year-old SPD has fallen from 20.5 percent in September's general election to 15.5 percent, it found, while the AfD climbed from 12.7 to 16 percent. Merkel's conservative CDU/CSU bloc was largely unchanged at 32 percent. Bild called the latest survey "a bitter blow" for the venerable SPD. "The conservative bloc is currently the only truly mainstream party," said Hermann Binkert, chief of the Insa polling institute, as reported by AFP.

In the September general election, the far-right AfD protest party siphoned millions of votes from all mainstream parties. Sitting in the glass-domed lower house of the German Bundestag for the first time were lawmakers of the far-right AfD, the anti-immigration, anti-Islam and anti-Merkel protest party that is at the heart of the crisis. Its entry into parliament in the Sept. 24 elections with almost 13 percent of the vote cost Merkel's conservatives and other mainstream parties dearly, further fragmenting the party political landscape and making it harder to gain a parliamentary majority.

Founded more than four years ago as a euro-skeptic party, the AfD has since lurched to the right, adopting a staunchly anti-Islam and anti-foreigner party platform. The AfD has enjoyed a surge of support in the wake of Chancellor Angela Merkel's controversial decision two years ago to open the nation's borders to refugees stranded in Hungary.

The news will add to woes within the SPD, whose numbers have been in free fall since the 20.5 per cent it garnered in September's inconclusive national election, its worst result since 1949. Support for the SPD has plummeted since its leadership reluctantly agreed to form another "grand coalition" with Merkel's conservatives after the election.

After weeks of tortuous negotiations, Merkel's conservatives and the SPD this month hammered out a hard-fought coalition pact that still needs to be approved by the SPD's 460,000 rank-and-file. If the members give the thumbs down, Merkel could choose to head an unstable minority government or face fresh elections, which could be disastrous for the SPD.

The result of the vote, which runs to March 2, is wide open and will be announced on March 4. Polls indicate a majority of SPD supporters back the deal, but in the absence of any internal surveys it is unclear whether its members feel the same way. Social Democrats' leader Martin Schulz, who led the party to its worst result in Germany's postwar history in September, stepped down last week after a personal row with Foreign Minister Sigmar Gabriel.