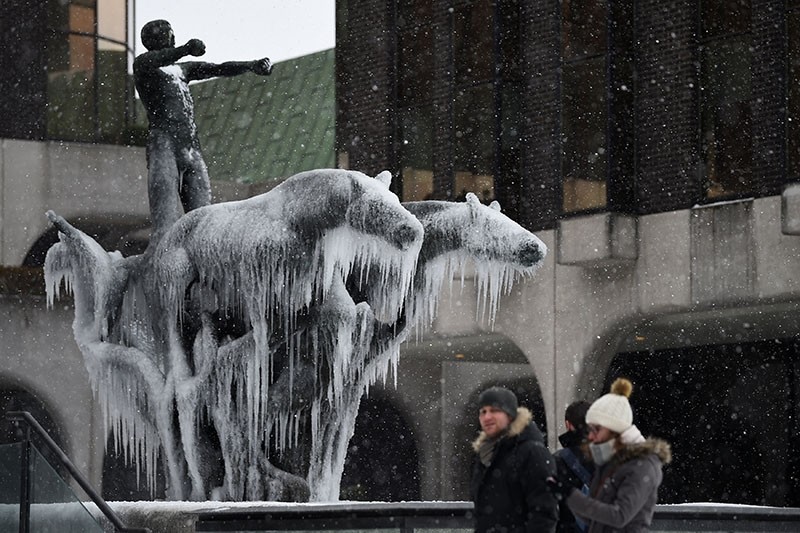 Snow storms shut most of Ireland on Friday and forced Britain to call in the army to battle some of the worst weather seen in nearly 30 years.

After a blast of Siberian weather dubbed "the beast from the east", southern Britain and Ireland were battered by Storm Emma which blocked roads, grounded planes and stopped trains.

At least 24,000 homes and businesses in Ireland were left without power, as snow drifts left accumulations up to three feet (90 cm) deep.

The Irish stock exchange was shut, all schools were closed and transport ground to a halt and all flights were canceled as the most severe red weather warning remained in place across much of the country.

"The country needs to more or less stay in hibernation today," Ireland's deputy Prime Minister Simon Coveney told state broadcaster RTE. "Hopefully we can continue to get through these freak weather conditions without tragedy."

In Britain, a seven-year-old girl was killed in Cornwall after a car crashed into a house in icy conditions, the BBC reported. Dozens of passengers were stranded on trains overnight in southern England.

The army was called in to help rescue hundreds of drivers stuck in the snow and to transport National Health Service workers. Roads were closed, schools shut and flights canceled across Britain.

"The Armed Forces are assisting emergency services in ensuring essential NHS staff are able to get to work and carry out their work in local communities," a spokesman for the Ministry of Defense said.

Weather conditions in Scotland, which initially bore the brunt of the Siberian cold front, improved slightly, but the authorities warned people not to travel on Friday and during the weekend. Only a handful of rail services were running in affected areas.

Around 30 vehicles stuck on a road near Aberdeen, the local council said, with many other roads closed due to snow drifts. a large number of flights canceled in Edinburgh and Glasgow airports.

"In the current bad weather, I want to say thank you to everyone going the extra mile to keep our country moving - and to keep us safe," British Prime Minister Theresa May said.

"Thank you to NHS staff and care workers, the police and the armed forces, and all those working to keep our vital public services going," May said.