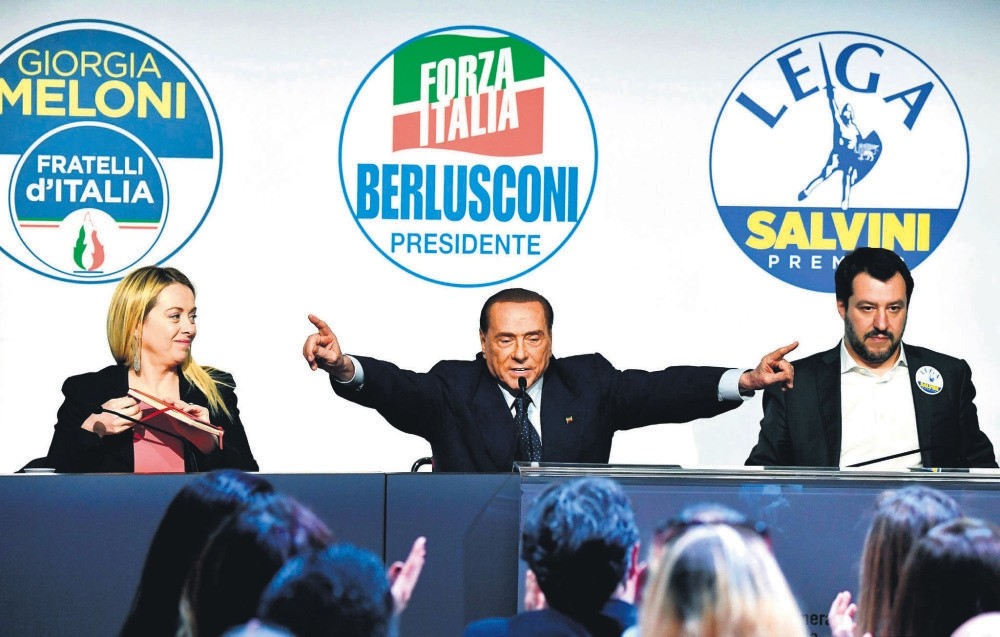 Leader of Brothers of Italy Giorgia Meloni, head of Forza Italia Silvio Berlusconi and leader of the North League Matteo Salvini, give a joint press conference at the Tempio di Adriano, Rome, March 1.
by Daily Sabah with Wires Mar 03, 2018 12:00 am

Italy's soon-to-end election campaigns read much like a police blotter, chronicling a country whose politics has lately been increasingly nasty, divisive and even violent

There has been a young man knifed while affixing posters for a far-left party, a politician for a far-right party beaten up on a street, a candidate for prime minister spat upon and shoved while stumping for her far-right party and protests and counter-protests in the streets from north to south.

The vote this Sunday to determine who will govern the country appears unlikely to bring much relief. Prospects have been high for weeks, even months, for more political tension, with backroom party maneuvering quite possibly producing a crisis-prone, short-lived government with limited chances of making much headway on Italy's economic and social issues.

If opinion polls prove accurate, voters will not reward any one party or coalition with enough votes to yield the parliamentary majority needed to sustain a viable government.

Italian law forbids publishing opinion poll results in the 15 days before an election. Earlier polls point to a hung parliament, split into three political blocs, each purportedly distrustful of allying with opponents in any government coalition of convenience.

"However the elections go, the situation will be opaque and fragile, but the market is used to seeing an unstable Italy," limiting the danger that the spread on sovereign bonds might rise alarmingly, said political scientist Roberto D'Alimonte, a Rome-based LUISS university professor.

Leading in opinion polls has been the Eurosceptic Five-Star Movement, but because it denies it is a political party, it candidate for prime minister, Luigi Di Maio, a 31-year-old former football stadium steward, nixes it entering into a post-election coalition government with established parties.

If anyone stands a chance of winning an absolute majority, analysts concur it is the campaign coalition anchored by former Premier Silvio Berlusconi's center-right Forza Italia Party and the right-wing, anti-immigration North League. Based in the more affluent north, the North League is led by Matteo Salvini, who hopes his party will outdraw Forza and position him for the prime ministry. A smaller campaign partner is the Brothers of Italy. Despite its name, it boasts the only female candidate for prime minster, Giorgia Meloni.

Because of a tax fraud conviction, Berlusconi cannot hold public office, but as a three-time prime minister, his face is a familiar one among European and international leaders, and he has even sometimes become the figurehead of comical situations between himself and his peers.

The 81-year-old billionaire recently went lobbying in Brussels to convince EU leaders that he is a dependable pro-Europe ally.

Berlusconi has also been unofficially promoting European Parliament President Antonio Tajani as the right person to be prime minister.

Two of Salvini's campaign vows are undoing unpopular pension reforms that raised the retirement age in the rapidly aging country and enacting a flat, 15 percent tax, a drastic drop from income tax rates that can surpass 40 percent.

The impact of such measures on Italy's public debt – its 132 percent debt-to-gross domestic product ratio is the highest in the EU after Greece's – could be considerable.

This week, Salvini received an offer of support from extreme-right leader Stefano Di Simone, who is betting his neo-fascist CasaPound party will ride the trend of rising nationalism in Europe and clinch the 3 percent of votes required to surpass the threshold to enter the Italian parliament.

The Democratic Party has steadily slipped in opinion polls after more left-leaning figures, including former communists, bolted from the party he has been steering increasingly to the center.

How the election plays out might well depend on the biggest bloc in opinion polls – those who say they are undecided or if they will even vote at all.