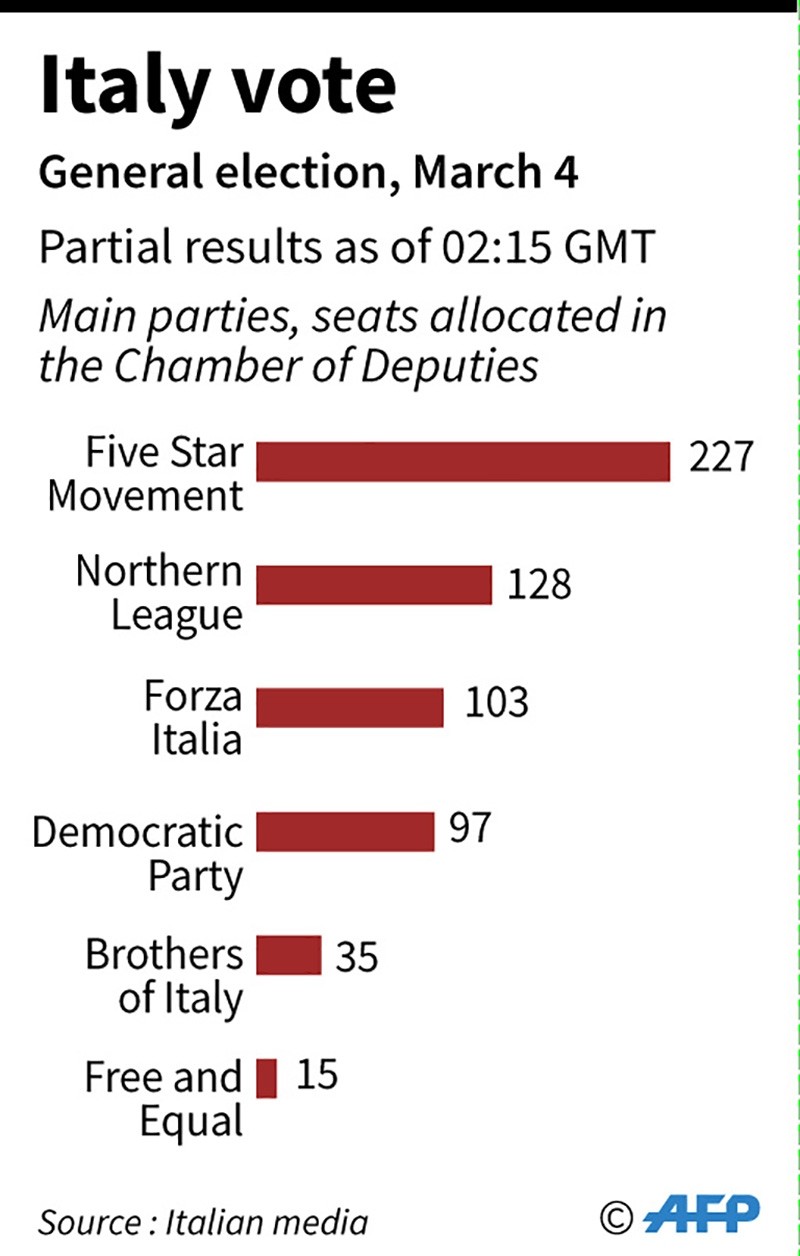 Italy faces a prolonged period of political instability after voters delivered a hung parliament in Sunday's election, spurning traditional parties and flocking to anti-establishment and far-right groups in record numbers.

With half the ballot counted, it looked almost certain that none of Italy's three main factions would be able to rule alone and there was little prospect of a return to mainstream government, giving the European Union a new headache to handle.

Scenarios now include the creation of a more euro-skeptic coalition, which would likely challenge EU budget restrictions and be little interested in further European integration, or swift new elections to try to break the deadlock. 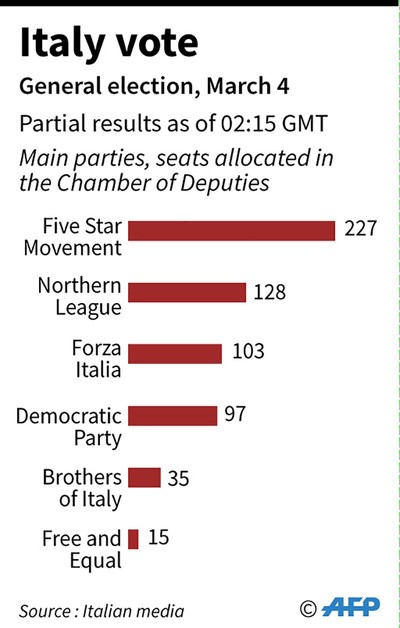 Despite overseeing a modest economic recovery, the ruling center-left coalition came a distant third, hit by widespread anger over persistent poverty, high unemployment and an influx of more than 600,000 migrants over the past four years.

The full result is not due until much later on Monday.

A prolonged political stalemate could make heavily indebted Italy the focus of market concern in Europe, now that the threat of German instability has receded after the revival on Sunday of a grand coalition under Chancellor Angela Merkel.

The euro dipped in Asia early on Monday and remained prone to volatility as investors awaited final results.

"Italy is far from having sorted its long-standing problems, and now it will have new ones. Be prepared for long and complex negotiations that will take months," said Lorenzo Codogno, a former chief economist at the Italian Treasury.

Berlusconi's center-right alliance was seen taking around 37 percent of the vote and in a bitter personal defeat for the billionaire media magnate, his Forza Italia party was overtaken by its ally, the far-right, anti-immigrant League.

"My first words: THANK YOU," League leader Matteo Salvini tweeted. His party, which campaigned on a fiercely anti-migrant ticket, looked set to win more than 17 percent of the vote against just 4 percent at the last national election in 2013.

But the biggest winner on Sunday was the 5-Star Movement, which was predicted to have won a third of all votes cast, up from 25 percent last time around, putting it in the driving seat in any future coalition talks.

"Nobody will be able to govern without the 5-Star Movement," said senior party member Riccardo Fraccaro. "We will assume the responsibility to build this government, but in a different way, talking with all the parties about what this country needs."

The ruling center-left bloc was seen on around 22 percent.

During two months of election campaigning, party leaders repeatedly ruled out any post-election tie-ups with their rivals. However, Italy has a long history of finding a way out of the apparently intractable political stalemate.

The 5-Star once rejected talk of any power sharing, but it has since modified its position and says it is willing to discuss common policies but not negotiate over cabinet posts.

Led by 31-year-old Luigi Di Maio, the movement was formed in 2009 and has fed off public fury over corruption in the Italian establishment and economic hardship. But some analysts have questioned whether other parties would be able to work with it.

Parliament will meet for the first time on March 23 and President Sergio Mattarella is not expected to open formal talks on forming a government until early April.

Pollster Federico Benini, head of the Winpoll agency, said vote projections suggested that 5-Star and the League would be the largest two parties in parliament and would comfortably have enough seats to govern together if they wanted.

They once shared strong anti-euro views. But while the League still says it wants to leave the single currency at the earliest feasible moment, the 5-Star has since softened its tone, saying the time for quitting the euro has passed.

Its flagship proposal in the election campaign was a promise to introduce a minimum monthly income of up to 780 euros ($963) for the poor. This so-called "Universal Wage" has helped the party draw massive support in the underdeveloped south.

By contrast, Berlusconi and his far-right, populist allies were expected to dominate in the wealthier north, with the center-left squeezed into a narrow stretch of territory across central Italy, including Tuscany.

"We did not anticipate this radicalization of the electorate who have turned for solutions to the 5-Star and League. We are going to have to reflect on this and find a response," said senior PD politician Ettore Rosato.

None of the major party leaders spoke in public on Sunday night as they awaited the final results. There was much speculation that the PD leader, former prime minister Matteo Renzi, would step down.

Populist parties have been on the rise across Europe since the 2008 financial crisis. Italy's mainstream parties have found it especially hard to contain voter anger, with the economy still 6 percent smaller than a decade ago and unemployment stuck at about 11 percent.