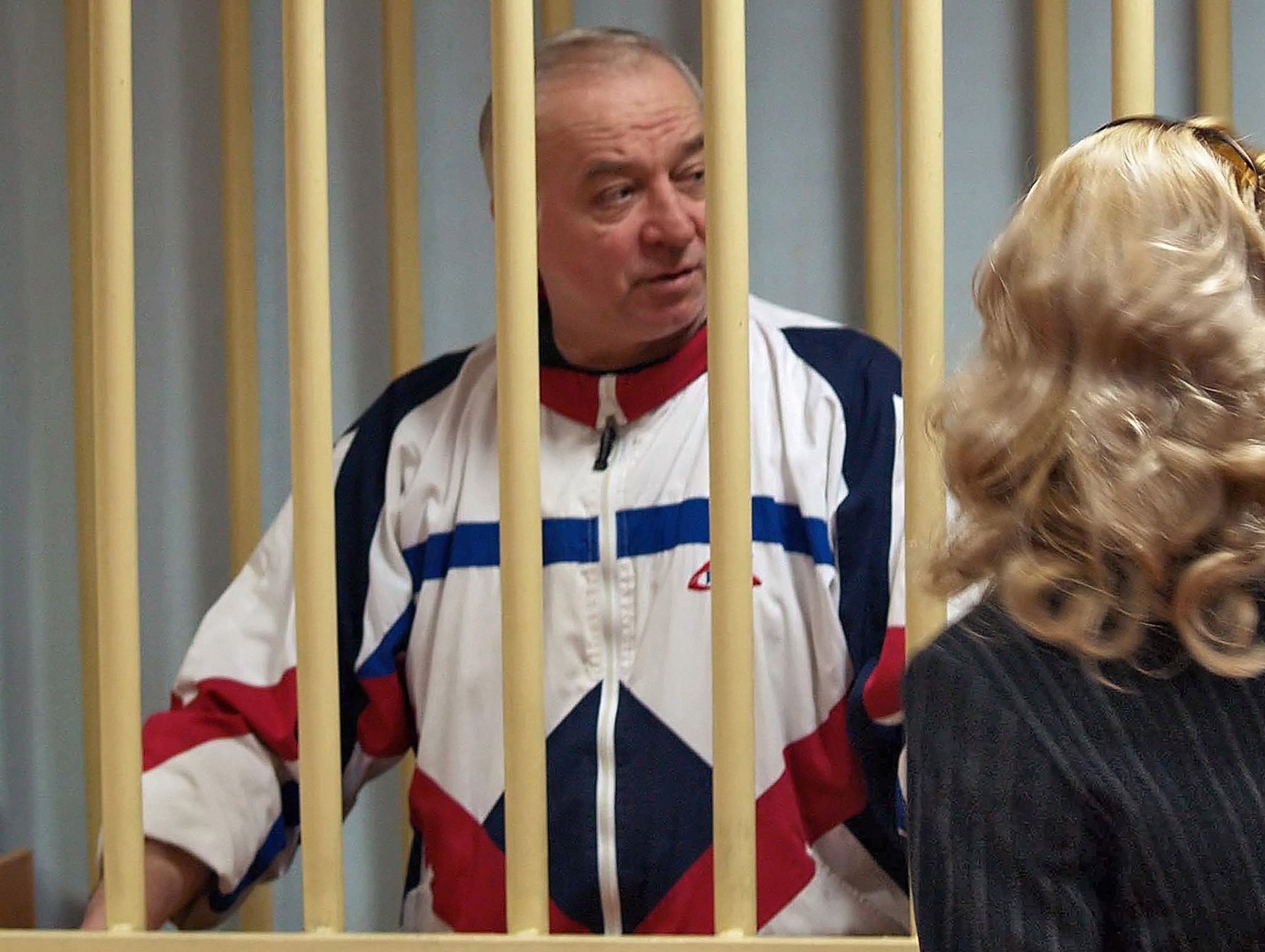 A photo dated August 9, 2006 shows Sergei Skripal talking from a defendants cage to his lawyer during a hearing at the Moscow District Military Court in Moscow. (EPA Photo)
by Compiled from Wire Services Mar 06, 2018 12:00 am

Russia's Foreign Ministry rejected as "groundless" and "wild" Britain's allegations on Tuesday that Moscow may be involved in a mysterious illness that struck down a former Russian spy, the TASS news agency reported.

Foreign Secretary Boris Johnson said Britain would respond robustly if it turns out Russia is to blame for the illness that struck down Sergei Skripal and his daughter on the streets of an English city after coming into contact with an unknown substance.

Johnson said he wasn't yet accusing anyone of harming Skripal and his daughter, Yulia but stressed that Britain would act — and possibly limit its participation in the upcoming soccer World Cup in Russia— if Moscow's hand is shown.

"I say to governments around the world that no attempt to take innocent life on U.K. soil will go either unsanctioned or unpunished," Johnson told lawmakers in the House of Commons.

British counterterror specialists took control of the case from local police trying to unravel the mystery of why the two collapsed in Salisbury, 90 miles (145 kilometers) southwest of London.

Both Skripal, 66, and his 33-year-old daughter are in critical condition in the intensive care unit of Salisbury District Hospital, Wiltshire Police said.

Although authorities said they were keeping an open mind — and pointedly did not declare a terrorist incident — the affair evoked echoes of the death of former Russian agent Alexander Litvinenko, who was poisoned with radioactive polonium-210 in London in 2006.

Police said it was too soon to jump to conclusions.

"I think we have to remember that Russian exiles are not immortal," Mark Rowley, the Metropolitan Police Service's assistant commissioner for counterterrorism, told the BBC. "They do all die and there can be a tendency for some conspiracy theories. But likewise we have to be alive to the fact of state threats, as illustrated by the Litvinenko case."

British lawmaker Tom Tugendhat, who heads Parliament's Foreign Affairs Committee, said it was too early to say for sure, but "it fits a very strong pattern" suggesting either Kremlin or organized crime involvement.

Tugendhat said Russia is "running rogue in the United Kingdom, and they are testing us. And I think it incumbent upon us to stand up for ourselves and to demonstrate that we are not willing to tolerate this kind of behavior."

Skripal is a former colonel in Russia's GRU military intelligence service who was convicted in 2006 of spying for Britain and imprisoned.

After his 2004 arrest in Moscow, he confessed to having been recruited by British intelligence in 1995 and said he provided information about GRU agents in Europe, receiving more than $100,000 in return.

At the time of his trial, the Russian media quoted the FSB domestic security agency as saying the damage from Skripal's activities was comparable to the harm inflicted by Oleg Penkovsky, a GRU colonel who spied for the U.S. and Britain in the Cold War. Penkovsky was executed in 1963.

Skripal was freed in 2010 as part of a widely publicized spy swap in which the U.S. agreed to hand over 10 members of a Russian sleeper cell found operating in America in return for four Russians convicted of spying for the West.

Skripal had been living openly in Britain under his own name, and his address in Salisbury appears in public records.

The Kremlin said British authorities haven't approached Russia for help in the Skripal investigation. But Dimitry Peskov, Putin's spokesman, said on a daily conference call with media in Russia that "Moscow is always ready to cooperate."

A small number of emergency services personnel were assessed immediately after the incident, and one remained in the hospital Tuesday, police said.

The discovery of Skripal and his daughter triggered a decontamination effort. Crews in billowing yellow hazardous materials suits worked into the night Monday, spraying down the pavement around the bench where they were found and examining the contents of a nearby garbage can. The hospital's emergency room was closed.

A pub and a restaurant in the area remain "secured," but police didn't say how long the cordons would be in place.

A security camera image of a man and woman walking through an alley connecting the Zizzi restaurant to the bench where Skripal and his daughter were found is believed to be of interest to police.

"Police had a good look at the footage and were interested in these two people. It was the only image they took away," said Cain Prince, 28, the manager of a nearby gym. "They wanted a list of everyone in the gym between 3 p.m. and 4 p.m. as well."

The circumstances surrounding the incident remained murky, and police urged the public not to jump to conclusions, but that didn't stop the speculation.

Several opponents of the Kremlin have died in mysterious circumstances in Britain in recent years, including Litvinenko and Putin opponent Boris Berezovsky. The cause of Berezovsky's 2013 death has never been determined.

Keir Giles, senior consulting fellow at the Russia and Eurasia Program at the Chatham House think-tank, said the potential presence of an exotic poison "does bear the hallmarks of Russian state involvement."

"It's not quite the same as murdering them with a sickle through the heart with 'made in U.S.S.R.' stamped on it," he said. "But it does lead a lot more firmly to the conclusion that this is the Russian state involved."

But other experts underscored that little is clear. Mark Galeotti, head of the Center for European Security at the Institute of International Relations in Prague, urged caution. He pointed out that Russia hasn't tried to eliminate swapped spies "as this would spoil their chances of getting future exchanges" with the West.

"The mythology that Moscow always gets back at those who betray them is just that, a mythology. Not every exiled spy or Kremlin enemy has been killed." he said. "It is more likely that Skripal was still a spy or he was working for a private intelligence firm or they (Kremlin) thought he was."