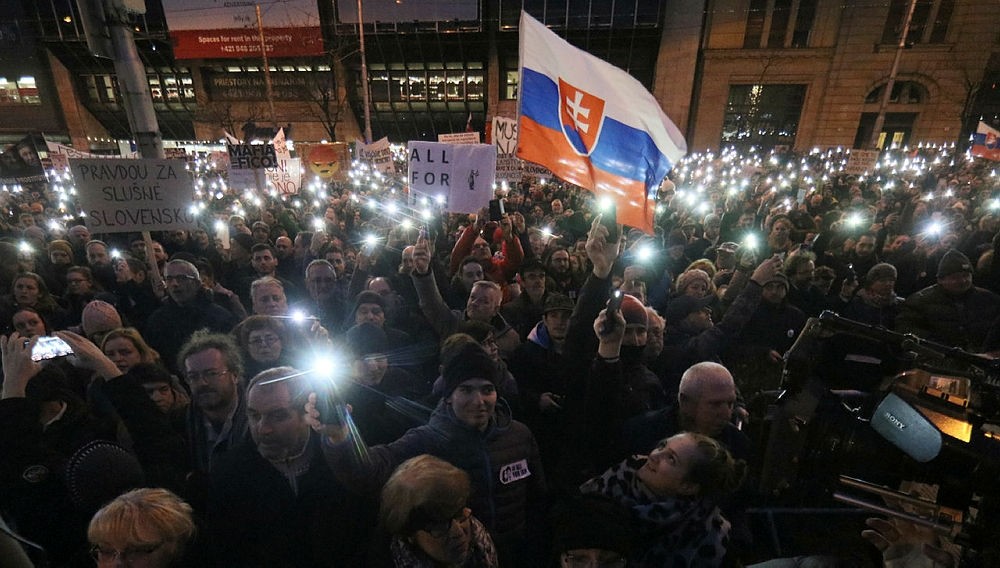 Demonstrators light with the the torches of their smartphones during an anti-government rally in Bratislava, Slovakia, Friday, March 9, 2018. (AFP Photo)
by Mar 09, 2018 12:00 am

Tens of thousands of Slovaks on Friday protested against the government and corruption, following the murder of journalist Jan Kuciak and his fiancee last month.

The SME daily said about 40,000 people gathered in Bratislava, making it the biggest protest in the country since the 1989 Velvet Revolution that toppled Communism in former Czechoslovakia.

Kuciak and his fiancee Martina Kusnirova, both 27, were found shot dead at their home near Bratislava on February 25.

Police have said Kuciak's death was "most likely" related to his investigation resulting in an article on ties between Slovakia's top politicians and the Italian mafia, which his employer posthumously published.

The murder and the article sparked anti-government sentiment in the EU and NATO member of 5.4 million people.

The rallies got off to a peaceful start despite Prime Minister Robert Fico's warning earlier on Friday that protesters might attack "public buildings."

"Fico, step down!" read a banner held by one protester in central Bratislava. Others held up messages reading' "We want a decent Slovakia" and "Fico in bed with the mafia."

People also gathered outside the Slovak embassies in Prague and Berlin.

President Andrej Kiska, who called for a cabinet reshuffle or snap elections in the wake of the murders last month, tried to bring the crisis to an end by inviting Fico and parliament speaker Andrej Danko to talks on Friday.

But the three failed to agree on a joint declaration.

Fico has suggested he might sack Kalinak. He is due to meet Most-Hid chairman Bela Bugar for talks at the weekend.

If Kalinak stays and Most-Hid quits, the most likely outcome is a minority government led by Fico or early elections.

A European Parliament delegation has visited Slovakia to inquire about the state of the investigations.

"EU will do whatever it can to support investigation into his (Kuciak's) death," delegation head Claude Moraes tweeted on Friday.

The killings had already prompted candlelit anti-graft protests and memorials in Slovakia and abroad last week, with some 25,000 people taking part in Bratislava alone.