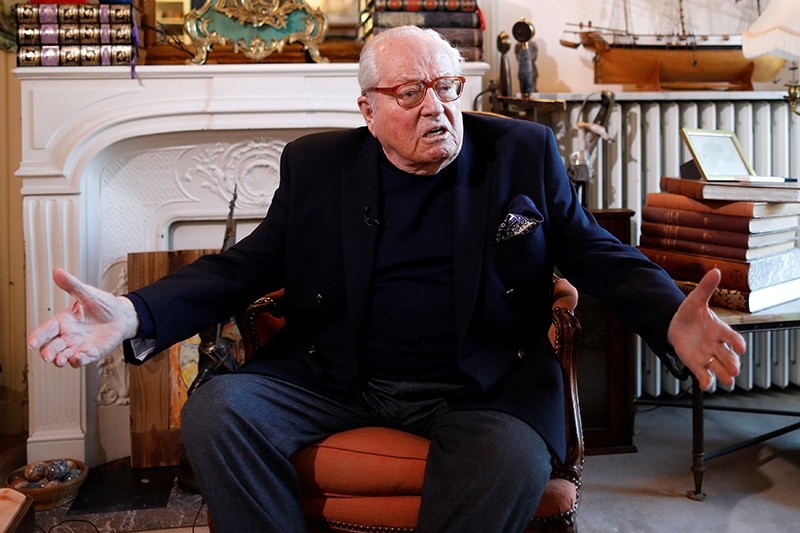 France's National Front has stripped founder Jean-Marie Le Pen of his position as honorary president, ending his last formal connection with the far-right party as it seeks to broaden its support.

The move was part of a wider rule change approved by participants at a weekend congress where the current leader, his daughter Marine Le Pen, says she wants to re-launch the party.

The vote was announced by party vice president Jean-Francois Jalkh at the start of the second day of a congress that Marine Le Pen says is intended to relaunch the party. At her keynote speech on Sunday afternoon, she will also propose a name change.

The National Front was co-founded by Jean-Marie Le Pen in 1972 and led by him for nearly 40 years until he was replaced by his daughter Marine in 2011. She attempted to banish him from the party in 2015 after he repeated his belief that the Nazi gas chambers were "a detail of history." He was officially expelled from the party in 2015 over those remarks, but courts had said that he retained the position of honorary president under the party's rules.

Marine Le Pen on Sunday told members of her National Front that the party should be relaunched and renamed the National Alliance to broaden its appeal and show that it is now a "party of government."

"I think the moment of the great clarification has come," Le Pen, who won 34 percent of the vote against centrist Emmanuel Macron in last year's presidential elections, told flag-waving supporters. Le Pen wants to bury the National Front (FN) name that has been associated with her father Jean-Marie since 1972.

The new divide in politics was not left versus right but "globalists versus nationalists," she repeated.

Le Pen scored a lower-than-expected 34 percent as she lost to President Emmanuel Macron last May and has since struggled to assert her authority after admitting to mistakes during her campaign. "Without a name change, we will not be able to forge alliances. And without alliances we will never be able to take power," she said last month as she faced questions from many skeptical members.

On Saturday, congress participants were treated to a barnstorming speech by Stephen Bannon, former chief strategist of U.S. President Donald Trump, who assured them that populism was on the march worldwide.

"History is on our side," Bannon said, citing the strong showing of populist and far-right parties in last week's Italian elections as well as Trump's presidency and right-wing governments in Hungary and Poland, according to DPA.