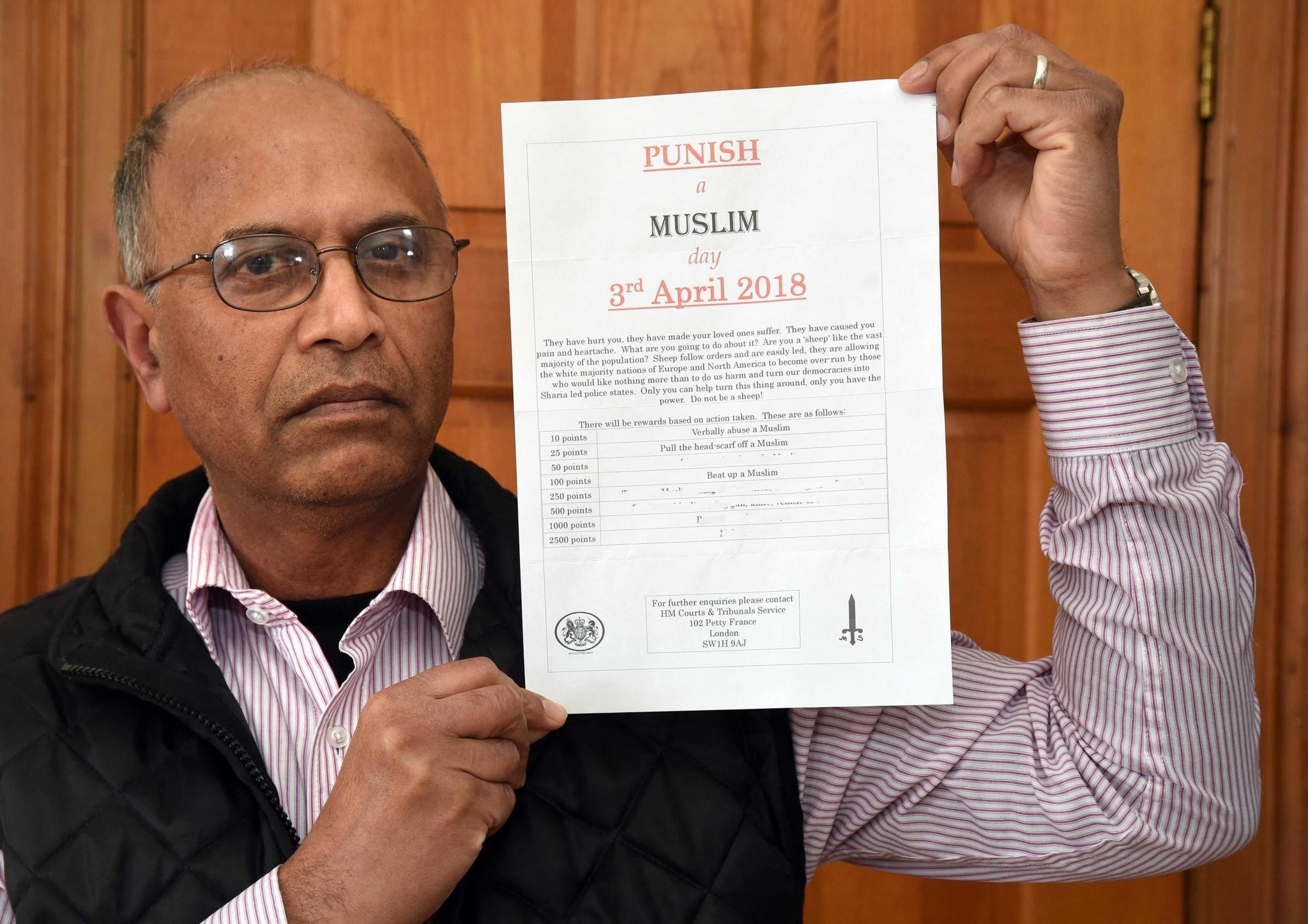 Councillor Riaz Ahmed holds the letter that was sent to him at his business address in Bradford, March 9.
by Angelos Berberakis Mar 12, 2018 12:00 am

A hate-filled and confusing letter going around in the U.K. calls for violence against Muslims with a score-based system, as hate crimes in the country increase

Police departments in West Yorkshire and Bradford have launched investigations after residents in apparently, and curiously enough, predominantly Muslim neighborhoods have reported receiving letters calling for violent action and even torture against Muslims.

"They have hurt you, they have made your loved ones suffer. They have caused you pain and heartache. What are you going to do about it?" reads the letter, titled "Punish a Muslim day 3rd April 2018."

April 3 could probably not be random. On that day in 2004 Islamist terrorists who were involved in the Madrid train bombings, which killed 192 people and injured 2,050 more, killed themselves in their apartment as police officers were raiding it.

It is also the day that a bomb exploded in a St. Petersburg metro station, killing 14 and injuring many more.

The letter continues, asking the reader if they are "sheep like the vast majority of the population?"

It also makes mention of the demographic replacement of White Europeans and European-Americans in Europe and North America as a result of mass immigration and great differences in birth rates between Whites and either foreign-born or immigrant-descended citizens.

They "would like nothing more than to do to us harm and turn out [sic] democracies into Sharia led police states."

The message goes on, and concludes that violent action must be taken. "Only you can help turn this thing around, only you have the power. Do not be a sheep!"

What follows has been quite unprecedented in the history of recent political threats, as well as quite disturbing.

"There will be rewards based on action taken. These are as follows:"

What proceeds is a list of suggested actions with the amount of points that would be rewarded for completing them.

They range from "verbally abusing a Muslim," for which 10 points are rewarded, to outright calling for death and even torture.

"Torture a Muslim using electrocution, skinning, use of a rack," 250 points;

The letter does not make any mention as to how these points would actually be redeemed, and they appear to be included simply for the sake of being there.

What follows after that is more baffling than anything else on the single-page letter.

On the bottom left, the logo of the British Ministry of Justice can be seen.

Bottom center we can see a boxed message, reading, "For further enquiries please contact HM [Her majesty's] Courts & Tribunals Service 102 Petty France London SW1H9AJ," which is the address of the aforementioned service.

Finally on the bottom right an as-of-yet unidentified symbol can be seen.

The symbol appears to be a simplistically drawn, monochromatic sword, and the letters "M" and "S" written on either side of the handle; no more details are visible.

The sword does not resemble any known symbol related to the government of the United Kingdom or any other state, unlike the logo of the Ministry of Justice, and it does not appear to be related to any major or minor fringe organizations.

Some in the United Kingdom have set out to take revenge against the Muslim population due to the variaous terrorist attacks that have occurred from London to Manchester and perhaps even because of other European cities that have also suffered multiple dead and life-altering injuries.

A Muslim Bradford resident who also received the letter, Councillor Riaz Ahmed, commented that the disturbing content intends to stir up racial violence.

He also said that he is particularly concerned about the letter's mention of Muslim-on-Muslim acid attacks due to their increased use in recent years, especially in London.

"I am alarmed by its content, especially where it mentions acid because of all the recent reports in the media of acid attacks."

Four far-right and 10 Islamist terror plots have thus far been foiled; however, there are some examples of successful anti-Muslim actions taken by extremists, such as the Finsbury Park terror attack and the car rammings in London and Leicester targeting Muslims outside of mosques.

According to statistics provided by the British Home Office, hate crimes spiked not only after the EU referendum result but also after the Westminster Bridge attack, the Manchester Arena attack and the London Bridge attack, which taken together left dozens dead and many more injured.

The peculiar nature of the letter itself suggests that it is not in fact genuine and could spawn an organized Internet campaign to stir up emotion within the populations of not only Britain but also the rest of the West.

The latest example of Internet trolls acting in such a manner would be the case of the Florida school shooter Nicolas Cruz and his supposed affiliation to a White-supremacist, separatist organization.

After the shooting and the death of several people, most of them children, it was revealed that the only reason Cruz was linked to the group was because of anonymous tips given to the media, which later contacted the leader of the group who confirmed the information, only to eventually reveal that he was actually lying for the sake of publicity.