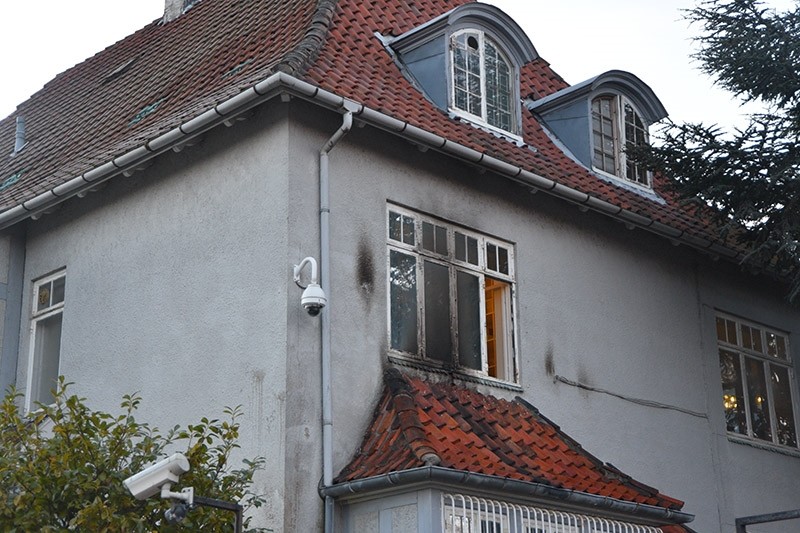 At least two people attacked Turkey's embassy in Copenhagen with Molotov cocktails early Monday, causing damage to the exterior of the building but no injuries, police in the Danish capital said.

The building was empty at the time.

Torben Madsen, the spokesperson of the Copenhagen police department, said that the incident was first noticed by patrolling officers at 02:55 a.m. local time.

Madsen said the police officers who responded to the incident saw two suspects escaping, but focused on extinguishing the fire instead of chasing and capturing the suspects.

He noted that the initial investigations suggest four suspects threw four Molotov cocktails at the building but did not share details about the motives of the attackers.

"We are still very early in the investigation. We are currently collecting technical tracks. This process also includes the collection of video surveillance," Madsen said.

Police took heavy security precautions outside the building after the attack.

No suspects were arrested after the incident.

In a tweet, Danish Prime Minister Lars Lokke Rasmussen condemned the attack: "Attacking diplomatic missions of other countries is a very serious act. The special statuses of embassies in our country must be respected.

"I hope those responsible for the attack on the Turkish Embassy will be brought to justice by being captured quickly," Rasmussen added.

Danish Foreign Minister Anders Samuelsen said in a statement: "I strongly condemn the arson attack attempt last night against Turkey's Embassy in Copenhagen. It is good that nobody got hurt."

Samuelsen said, "The Turkish Embassy stands under our protection as does all embassies in Copenhagen. An attack on an embassy is an attack on the Danish state. I thank our police for quick response."

Although no group has claimed responsibility for the attack yet, the PKK terrorist group frequently carries out attacks targeting Turkish community centers, mosques, shops and diplomatic missions throughout Europe and has increased such attacks in the continent following Turkey's Operation Olive Branch, which cleared PKK-linked People's Protection Units (YPG) terrorists in Syria's Afrin.