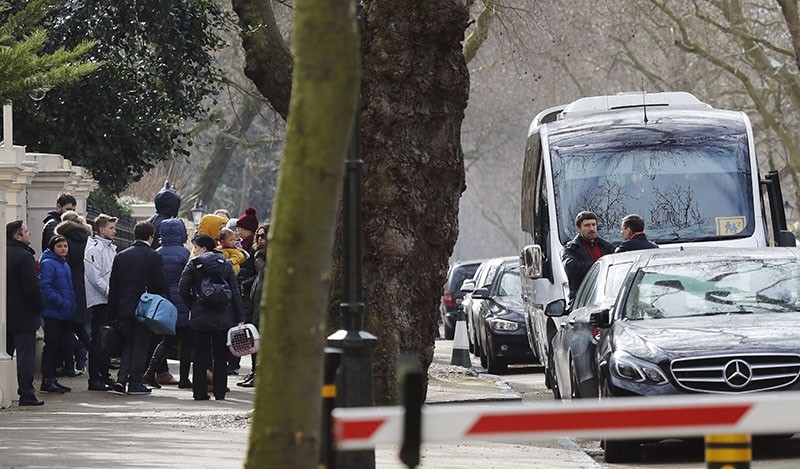 Several dozen people, including children, emerged from the Russian Embassy in west London with suitcases, bags and pet carriers. Some hugged before they boarded vehicles, including a white minibus, and were driven away.

The busses carrying Russian diplomats headed for the RAF Northolt Airbase where the expelled Russians later left the U.K. for Moscow, where they are expected to arrive on Tuesday evening.

The biggest single expulsion of foreign diplomats from the U.K. since the 1970s came after Russia refused to provide any explanation over their stockpile of the Soviet-developed form of the Novichok nerve agent - a military-grade chemical gas - which Britain says it used in the attempted murder of Sergei Skripal and Yulia Skripal in Salisbury on March 4. They remain in critical condition.

On March 14, Prime Minister Theresa May gave the 23 diplomats — whom she said were undeclared intelligence agents — a week to leave Britain. That prompted Russia to retaliate with its own expulsion of 23 British diplomats, who are expected to leave in the coming days.

Russia denied involvement, and President Vladimir Putin's spokesman, Dmitry Peskov, insisted Tuesday that "Russia has no stocks of chemical weapons of any kind."

Asked why Russia isn't showing proof of its innocence, he said, "Let's stay sober-minded and first of all wait for proof from Britain" that Russia was to blame.

Britain's National Security Council was meeting Tuesday to consider possible further measures against Russia. May and other European Union leaders are due to discuss the poisoning at a summit Thursday. The EU on Monday condemned the poisoning and called on Russia to "address urgently" British questions about the Novichok nerve agent program.

May said the incident took place "against the backdrop of a well-established pattern of Russian state aggression across Europe and beyond."

As well as expelling the 23 Russian diplomats, who the U.K. has identified as "undeclared intelligence officers," May said they would "develop proposals for new legislative powers to harden our defenses against Hostile State Activity and ensure those seeking to carry out such activity cannot enter the U.K." and "suspend all planned high-level contacts between the UK and the Russian Federation."

May also said British ministers and royal family members will boycott the Football World Cup hosted by Russia this summer.

Britain will also make "full use of existing powers to enhance our efforts to monitor and track the intentions of those travelling to the U.K. who could be engaged in activity that threatens the security of the U.K. and of our allies," May said.

The Russian Foreign Ministry accused Britain and other EU member states of developing similar nerve agents, and said Britain's government is stirring up "media hysteria" around the case to distract attention from troubles in negotiating the country's exit from the EU.

Russia insists it gave up all its chemical weapons under international oversight.

The British military and police are continuing to search for clues around Salisbury into what happened. International chemical weapons experts are due to take samples of the nerve agent.

British police investigators say it may take months to complete the widening inquiry. The focus is on the movement of the Skripals in the hours before they were found unconscious on a bench in the city 90 miles (145 kilometers) southwest of London. A police officer who came to their assistance is in serious condition.

"This is going to be frustrating for people," said Neil Basu, head of counterterrorism at the Metropolitan Police. "It is going to take weeks, possibly months to do this."

Despite the diplomatic tensions, the Russian Interior Ministry said it will continue cooperating with British authorities on security issues.

Deputy Interior Minister Igor Zubov told Interfax that the Skripal case "won't change anything for us at all."

The incident has drawn comparisons to the 2006 death of former KGB agent Alexander Litvinenko after drinking radioactive tea. Former KGB bodyguards identified as suspects in the murder denied any involvement.

Skripal was granted refuge in the UK following a 2010 spy exchange between the U.S. and Russia. Before the exchange, he was serving 13 years in prison for leaking information to British intelligence.

A statement from NATO Secretary General Jens Stoltenberg said the alliance supports the U.K., adding: "The attack in Salisbury was the first use of a nerve agent on Alliance territory. It showed total disrespect for human lives. And the attack was an unacceptable breach of international norms and rules."

France, Germany, the U.S., and the U.K. in a joint statement last week condemned Russia over the alleged nerve agent attack in Salisbury.