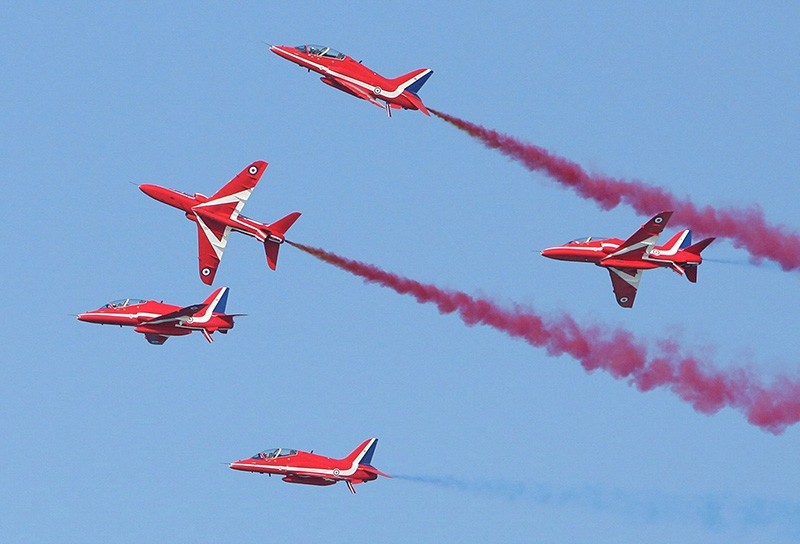 A jet belonging to the British military's Red Arrows aerobatic team crashed Tuesday at an air base in Wales, the air force and emergency services said. An engineer was killed and the pilot of the jet was injured, the air force said.

The Royal Air Force (RAF) confirmed there had been an incident involving a Hawk jet, the type used by the Red Arrows. It said "we are investigating the incident and it would be inappropriate to comment further at this stage."

The incident occurred in the early afternoon at RAF Valley in Anglesey, north Wales. No further details of the crash were available.

Video shot by a witness showed black smoke billowing from the airfield.

A witness, Sian Rebecca Williams, said she saw a parachute open, "and then the plane hit the runway with a bang and a crumbling noise. Then it just burned bright orange and there was smoke everywhere."

Founded in 1965, the Red Arrows are famous for their airborne stunts; red, white and blue vapor trails; dramatic flybys and trademark diamond formation. Their red single-engine jet trainers are a familiar sight at air shows and military events.

The RAF describes them on their website as "ambassadors for the United Kingdom at home and overseas."

The team has had few fatal accidents, but two Red Arrows pilots died in 2011 — one when his jet crashed after taking part in an air show in southern England and the other when he was ejected from his aircraft while it was on the ground.