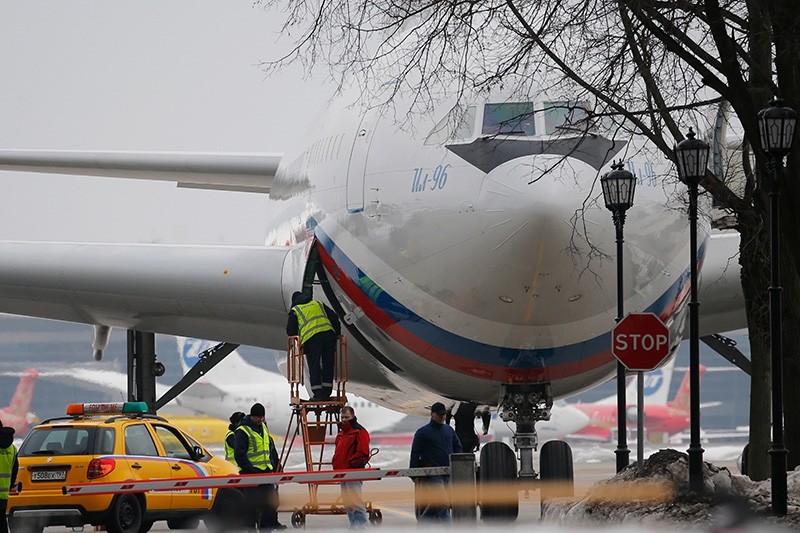 A plane carrying Russian diplomats and their family members ordered to leave the U.S. is parked after landing at Vnukovo 2 government airport outside Moscow, Russia, Sunday, April 1, 2018 (AP Photo)
by Compiled from Wire Services Apr 01, 2018 12:00 am

A plane carrying Russian diplomats who were expelled from the United States and their families has landed in Moscow.

Russian news agencies say the plane that landed Sunday at Vnukovo Airport was carrying diplomats from the Russian Embassy in Washington. A separate flight with diplomats and families from the New York consulate and Russia's United Nations mission was expected later in the day.

Washington joined a score of Britain's allies in expelling Russian diplomats in response to a nerve agent attack against a former double agent, with more than 150 ordered out of the US, EU members, NATO countries and other nations.

The U.S. announced it would send home 60 diplomats -- which it alleges are "spies" -- posted around the country and at the Russian mission to the United Nations, as well as closing Russia's consulate in Seattle.

Moscow responded by expelling 60 US diplomats and closing Washington's consulate in Saint Petersburg.

The tit-for-tat measures came in retaliation to the coordinated expulsion of Russian diplomats by Britain and its allies over the nerve agent attack against former double agent Sergei Skripal and his daughter Yulia in the English city of Salisbury on March 4.

It is the biggest wave of diplomatic expulsions between Russia and the West in recent memory.