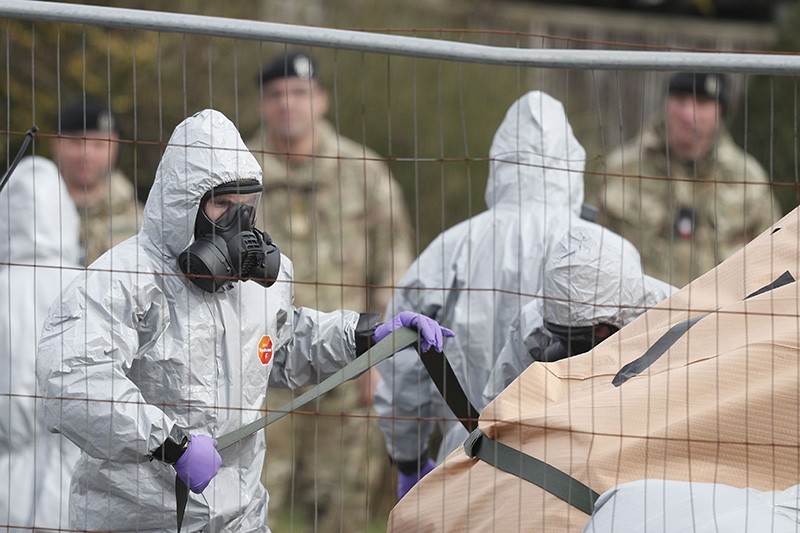 In this file photo taken on March 14, 2018 British military personnel wearing protective coveralls work to remove a vehicle connected to the March 4 nerve agent attack in Salisbury from a residential street in Gillingham, England. (AFP Photo)
by Associated Press Apr 03, 2018 12:00 am

The head of Britain's defense laboratory said Tuesday that its scientists have not identified the precise source of the nerve agent that poisoned former spy Sergei Skripal, though it's likely the attack was carried out by a "state actor."

Britain blames Russia for the March 4 attack on Skripal and his daughter Yulia, a claim Moscow fiercely denies.

Scientists at the Porton Down lab have identified the poison as a Soviet-developed type of nerve agent known as Novichok, and the British government says the only plausible explanation is that it came from Russia.

Porton Down chief executive Gary Aitkenhead said scientists at the lab "have not verified the precise source, but we provided the scientific information to the government who have then used a number of other sources to piece together the conclusions that they have come to."

"It's our job to provide the scientific evidence that identifies what the particular nerve agent is ... but it's not our job to say where that was actually manufactured," he told Sky News.

Aitkenhead said the attack with a highly toxic chemical weapon was "probably only within the capabilities of a state actor."

Russian officials have suggested the poison may have come from Britain, pointing out that Porton Down conducts secret chemical and biological weapons research.

Aitkenhead said there is "no way" the nerve agent could have come from the high-security facility.

"We deal with a number of very toxic substances as part of the work that we do, we've got the highest levels of security and controls," he said.

Sergei Skripal, a former Russian intelligence agent convicted of spying for Britain, and his daughter were found unconscious and critically ill in the English cathedral city of Salisbury a month ago. The elder Skripal, 66, remains in critical condition, while his 33-year-old daughter is improving in a Salisbury hospital.

The attack has sparked a crisis in relations between Russia and the West. European Union nations, the United States and other Western countries joined Britain in expelling more than 150 Russian diplomats, and Russia has responded by kicking out scores of Western envoys.

On Tuesday, the Organization for the Prohibition of Chemical Weapons said it would hold an emergency meeting on the case at the request of Russia, which is demanding Britain hand over its evidence.

The chemical weapons control body said the meeting will be held at 0800GMT Wednesday at its headquarters in the Hague.

Yury Filatov, Russia's ambassador to Ireland, said Russia wants Britain to "provide every possible element of evidence they might have in their hands" about the attack.

He said that if Britain does not show evidence to back up its allegation, "there are ample grounds to assume that we are dealing with a grand scale provocation organized in London aimed to discredit Russia."

Britain's Foreign Office said the Moscow-requested meeting was a "diversionary tactic, intended to undermine the work of the OPCW in reaching a conclusion."