Islamophobia is an undeniable social fact in Europe, report says 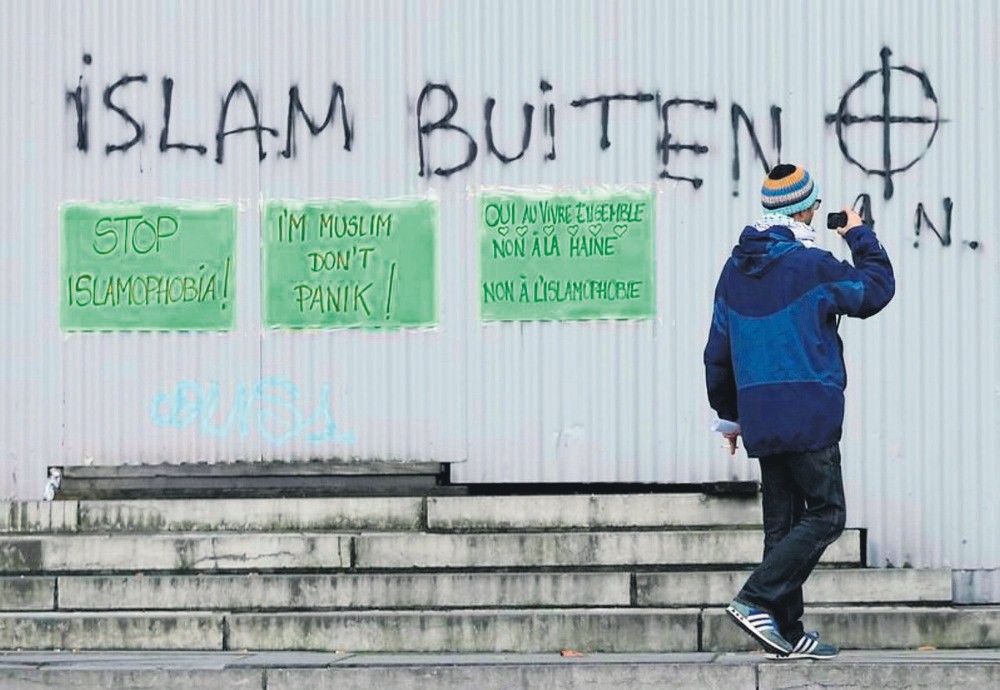 Islamophobia appears and remains an undeniable fact in the European societies, the report says.
by Yusuf Selman İnanç Apr 04, 2018 12:00 am

SETA has released its annual report on Islamophobia, covering more than 30 countries and giving several statistics and findings, the most important of which concerns Islamophobia

A recently released report from the Foundation for Political, Economic and Social Research (SETA) on Islamophobia says that the Islamophobia is an undeniable fact in Europe. While European intellectual circles still discuss the question of whether Islamophobia exists or not and what it covers, the report says that the hatred of Islam and its followers is on the rise as explained through numbers and statistics in more than 30 countries. Compiled by Enes Bayraklı and Farid Hafez, the 729-page report, which can be found in full on SETA's website, includes the European Islamophobia Report's (EIR) country-based findings on Islamophobic crimes.The report, which considers the rise of far-right parties as a "vital threat to democracy," says that the Islamophobia is on the rise in Europe as a result of right-wing politicians and parties coming in from the periphery. "Firstly, the far-right political camp has moved from the periphery to the center and become integral to the political landscape in Europe.

While most far-right parties are still in opposition, some have gained major influence by becoming governing parties such as in the cases of Austria, Bulgaria, and Finland. While others may still be in opposition, their Islamophobic discourse, which is so central to most of them, has become mainstream since their issues have been co-opted by former centrist political parties," the report says. Even though far-right extremist parties are in the opposition, their anti-Muslim rhetoric has a considerable impact on shaping society, according to the report. It also says that far-right politicians from different countries are cooperating. "We also observe a stronger cooperation of various Islamophobic parties in Europe. For instance, the Czech Freedom and Direct Democracy Party (SPD) organized a meeting of representatives of its partners from the European Parliament in December 2017 in Prague. Politicians such as Geert Wilders (Dutch Freedom Party) and Marine Le Pen (Front National) were among some of the participants," the report said.

Despite that similar reports are published by some agencies and survey companies, they are not as large as SETA's and do not present the larger picture. Benefiting from other reports as well, the EIR employed more than 40 scholars and civil society activists from different backgrounds in several countries, including almost all EU countries. During the preparation for the EIR, the authors collaborated with other institutions and their representatives.

The EIR has some key findings that are quite remarkable and frightening for the future of Muslims in Europe, as a high number of individuals have been subjected to discrimination or hate speech. "As the report based on a survey of 10,527 people who identified themselves as Muslims published by the European Fundamental Rights Agency (FRA) reveals 76% of Muslim respondents feel strongly attached to the country they live in, while 31% of those seeking work have been discriminated against in the last five years," it says. The report also recorded that the number of reported cases is low. According to the report, the real number of attacks may be eight times higher than recorded, as Muslims are reluctant to go to the police due to several reasons, including that victims may not have knowledge of legal procedures in the country they live in, victims' possible social isolation or proximity to the perpetrator, victims' lack of trust in the authorities or victims fear of being victimized again by police officers. The report also says Islamophobia is not taken seriously and is not considered a hate crime in European societies. "The denial of the very existence of Islamophobia/anti-Muslim racism/anti-Muslim hate crime in Europe by many demonstrates the need for an appropriate effort and political will to tackle this normalized racism and its manifestations that are deeply entrenched in European societies, institutions, and states," the report says. The report adds that European intellectuals consider that Islamophobia is a term created by Muslims to block any discussion on Islam. "In countries like Austria and Norway, leading journalists of editorial boards shift the focus from Islamophobia as a problem to Islamophobia as a 'combat term,' arguing that the term itself is used by Islamists to delegitimize any debate on Islam and Muslims. Hence, there is a reluctance to use the term 'Islamophobia' in the public sphere."

Muslims in most of EU countries are the most discriminated and attacked minority. For instance, in Denmark, "20 percent of all hate crimes committed in 2016 targeted Muslims, while the group makes up 5 percent of the general population, making Muslims the most targeted minority." In Austria, where there were hundreds of attacks, "68 percent calls for stricter control of possible foreign financing of mosques, while 84 percent also wants stricter control of Islamic kindergartens. Sixty-nine percent is in favor of a headscarf ban for teachers and kindergarten staff." Despite the decrease in the number of attacks in France, threats and traumatic experiences were on the rise.

"The Observatory of Islamophobia has reported 121 anti-Muslim attacks which represent a decrease of 34.6%. The observatory has further reported a decrease in attacks against places of worship (-12.8%) but has highlighted the increase in threats and traumatic experiences (+7.5%). But such numbers are limited by their non-inclusion of Islamophobic attacks committed by the French state and its agencies which, therefore, excludes the repression that has been targeting Muslim individuals and institutions," the report says. Regarding Germany, the report says: "The year 2017 also witnessed around 5.2 attacks on refugees and 0.3 attacks on aid workers per day, along with around a total of 100 attacks on mosques, as well as around 908 attacks on German Muslims."

Despite these statistics, complete figures are unknown. "The overwhelming majority of European states do not record Islamophobic incidents as a separate category of hate crime. The recording of anti-Muslim/Islamophobic crimes by the police as a separate category of hate crime is essential to uncover the real extent of this problem and to develop counter-strategies to combat it. In the EU, only 12% of Muslims who have been discriminated against report their cases to the authorities," the report says.