Britain is 'playing with fire and will be sorry,' Russia says 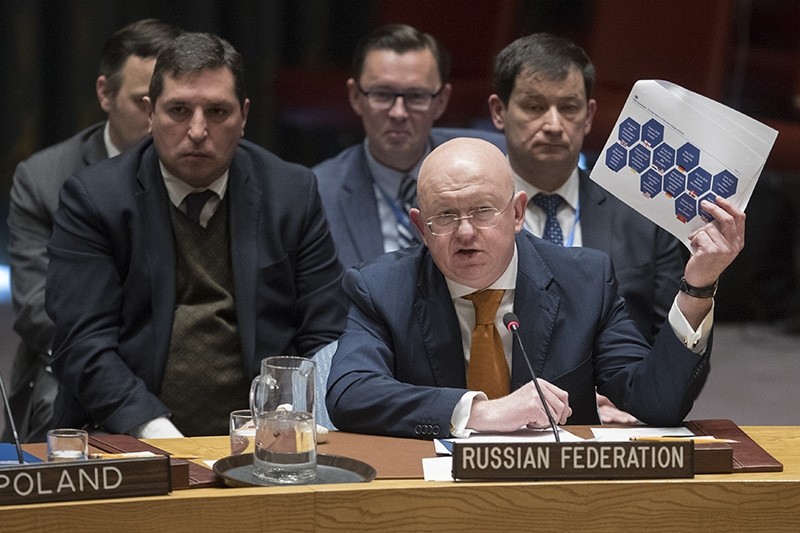 Russian Ambassador to the United Nations Vassily Nebenzia holds up a British report on the Salisbury Incident as he speaks during a Security Council meeting on the situation between Britain and Russia on April 5, 2018 at UN headquarters. (AP Photo)
by Compiled from Wire Services Apr 06, 2018 12:00 am

The international furor over the poisoning of a former Russian spy and his daughter intensified, with Russia warning Britain that it was "playing with fire."

At a U.N. Security Council meeting on Thursday, Russia's U.N. Ambassador Vassily Nebenzia claimed that Russia was the victim of a hasty, sloppy and ill-intentioned defamation campaign by London and its allies.

Britain has blamed Russia for the March 4 poisoning of Sergei Skripal and his daughter. In response, more than two dozen Western allies including Britain, the U.S. and NATO have ordered out over 150 Russian diplomats in a show of solidarity. Moscow has fiercely denied its involvement in the nerve agent attack and expelled an equal number of envoys. The diplomatic turmoil has hit lows unseen even at the height of the Cold War.

Moscow assumes "with a high degree of probability" that the intelligence services of other countries are likely responsible for the incident, Nebenzia said at the U.N.

"Everything confirms this is a coordinated, very well-planned campaign" intended "to discredit and even delegitimize Russia," he added.

Nebenzia refused to name the intelligence services that Russia suspects, but said their goal is to accuse Moscow of using "a horrible, inhumane weapon, of concealing the arsenal of this substance," of violating the Chemical Weapons Convention, and putting in question Russia's "role not only in finding a solution in Syria, but anywhere else."

He warned: "We have told our British colleagues that you are playing with fire and you will be sorry."Russia requested the U.N. Security Council meeting on Wednesday, the same day that Moscow failed in its bid to join a probe into the Salisbury incident by global chemical watchdog, the Organization for the Prohibition of Chemical Weapons.

In response, British Ambassador Karen Pierce said London had conveyed Russia's demand for consular access to the spy's daughter Yulia Skripal and that the British government had acted entirely properly within international convention.

"I won't take any lectures on morality or on our responsibilities," said Pierce, "from a country that, as this council debated yesterday, has done so much to block the proper investigation of the use of chemical weapons in Syria."

Britain's Pierce said Russia's 24 theories for the attack include blaming it on terrorists and saying Britain wanted to distract from Brexit, its departure from the European Union.

Earlier Thursday, Skripal's 33-year-old daughter, Yulia, said in a statement released by British police that her "strength is growing daily" and she expressed gratitude to those who came to her aid when she and her father, Sergei, were found unconscious on a bench a month ago.

"I am sure you appreciate that the entire episode is somewhat disorientating, and I hope that you'll respect my privacy and that of my family during the period of my convalescence," she said in her first public comment.

The hospital in the English city of Salisbury confirmed that Yulia's health has improved, while her 66-year-old father remains in critical condition.

Adding to the intrigue was a recording aired Thursday by Russian state Rossiya TV of a purported phone call between Yulia Skripal and her cousin in Russia. In the call, Yulia Skripal allegedly said she and her father were both recovering and in normal health, and that her father's health was not irreparably damaged.

Rossiya TV said Skripal's niece, Viktoria, who lives in Moscow, gave it the purported recording, although the broadcaster said it could not verify its authenticity.

"What happened to these animals? Why doesn't anyone mention them? Their condition is also an important piece of evidence," he said.

A British government spokeswoman told AFP late Thursday that both guinea pigs had died and that a cat found in a distressed state was euthanized. She did not mention a second cat.

Nebenzia also reached for a copy of "Alice in Wonderland" and read aloud an extract about the white rabbit.

"It suits Russia to turn the whole business into a farce. By playing up the melodrama at the U.N., Nebenzia succeeds in distracting from the seriousness of the crime," Richard Gowan, a U.N. expert at the European Council on Foreign Relations, told AFP.

"By turning it into a game, Russia aims to make the UK look a bit silly. A lot of other countries might like to let the matter drop before it worsens relations with Russia further, so Moscow's strategy may not be a joke," he added.

But even before the meeting, the British ambassador kicked off the literary allusions by taking aim at her Russian counterpart's purported fondness for a Sherlock Holmes analogy.

Allowing Russians scientists "into an investigation where they are the most likely perpetrators of the crime... would be like Scotland Yard inviting in Professor Moriarty," she told reporters of Arthur Conan Doyle's fictional criminal mastermind.