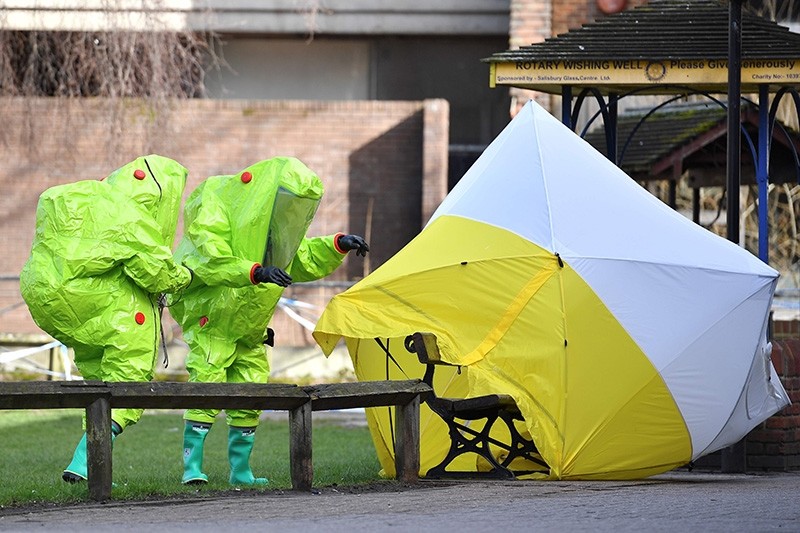 In this file photo taken on March 8, 2018 members of the emergency services in green biohazard encapsulated suits re-affix the tent over the bench where Russian spy Sergei Skripal and his daughter Yulia were found in critical condition. (AFP Photo)
by reuters
Apr 06, 2018 12:00 am

Former Russian spy Sergei Skripal is no longer in critical condition and his health is improving rapidly more than a month since he was poisoned with a nerve agent, the British hospital treating him said on Friday.

Sergei Skripal, 66, and his daughter Yulia were found slumped unconscious on a public bench in the English city of Salisbury on March 4.

Britain said they were poisoned with a military-grade nerve agent first developed by the Soviet Union. Russia has denied it had anything to do with the first known use of such a toxin on European soil since World War Two.

"He is responding well to treatment, improving rapidly and is no longer in a critical condition," Christine Blanshard, Medical Director at Salisbury District Hospital, said in a statement.

Blanshard said she was providing the update response to "intense media coverage yesterday."

On Thursday, Russian state television reported Yulia had phoned her cousin and told her that she and her father were both recovering and that she expected to leave hospital soon.

Britain has said Russia is culpable for the attack, while Moscow denies any involvement. The incident has had major diplomatic ramifications, with mass expulsions of Russian and Western diplomats.