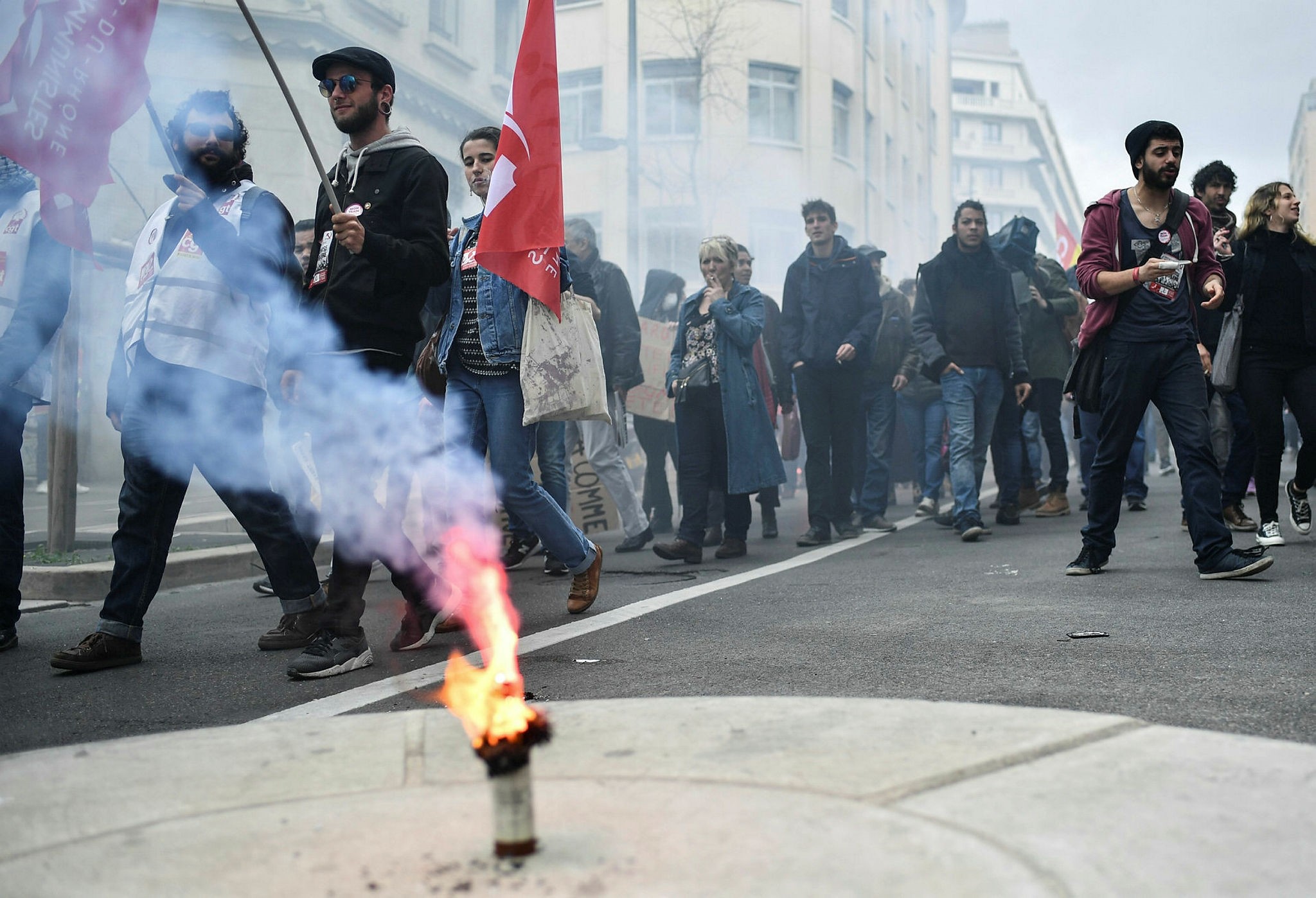 Students and medical workers faced off against riot police in a protest over reforms by French President Emmanuel Macron's government as his efforts to overhaul the country have met increasing social resistance.

The protest took place yesterday outside a hospital in the Normandy city of Rouen, where Macron visited a unit dedicated to children with autism.

Medical workers brandished union flags and banners decrying "Hospital Hell" to express anger over cuts to the public health care system. Local students also joined the protest. Students have been blocking some campuses around France in recent weeks to protest plans to reform admissions to public universities as well as other changes. The protest comes after two days of crippling strikes on the state railway network.

French Prime Minister Edouard Philippe said yesterday the government would not budge on its plans to shake up state rail operator SNCF after two days of train strikes that snarled rail traffic across the country. The four main rail unions - namely the

CGT, Sud Rail, CFDT and UNSA-Railways - plan to strike two days in every five over the next three months, the sternest challenge yet to President Emmanuel Macron's plans to modernize the French economy. Students, trash collectors, some staff in the electricity and energy sector, and employees of Air France are taking part of what is described as the biggest wave of industrial unrest since President Emmanuel Macron's election last May.

"I can confirm that we are determined to pursue this reform," Philippe told France Inter radio, saying it was necessary "to ensure the efficient operations and quality of the SNCF," as reported by AFP. But unions claimed they were gaining support for their challenge to plans to phase out the guaranteed jobs for life and early retirement currently enjoyed by rail workers. Under the government's plan, new hires at the debt-ridden SNCF would no longer have the right to these benefits. It would also turn the SNCF into a corporate entity whose shares would be owned by the state, a move unions see as a first step toward privatization, despite the government's denials.

As part of political reforms, France will cut the number of lawmakers by almost a third and introduce a degree of proportional representation for the next legislative elections, in a major change aimed at restoring voters' confidence in a largely discredited political class.

Macron's Prime Minister, Edouard Philippe, said the reforms, if approved by both houses of parliament, will speed up the lawmaking process and give more of a voice to groups currently under-represented in parliament. "These bills will contribute to a deep renovation of political and parliamentary life, in a spirit of responsibility, representation and efficiency," Philippe said. The number of lawmakers at both the lower house National Assembly and the Senate will be cut by 30 percent, he said.