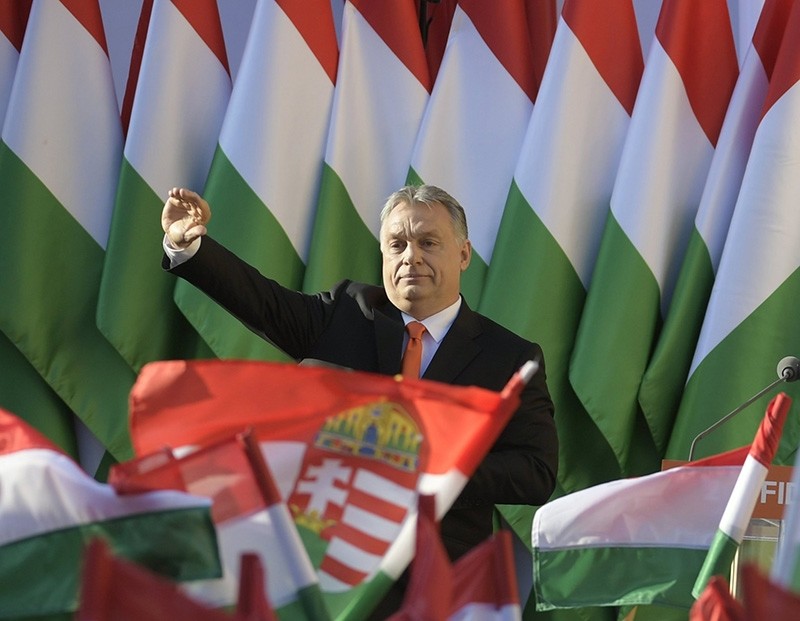 President of the ruling Fidesz party, Prime Minister Viktor Orban waves as he attends the final electoral rally of Fidesz in Szekesfehervar, some 63km southwest of Budapest, Hungary, April 6, 2018. (EPA Photo)
by Daily Sabah with Agencies Apr 08, 2018 12:00 am

Hungary's Viktor Orban, his party victorious in elections Sunday, is the self-styled defender of Christian Europe against the ‘poison’ of immigration and a prominent Eurosceptic

"We won," Orban told his supporters shortly after preliminary results showed that his Fidesz- The Christian Democratic People's Party (KNDP) coalition was projected to win by a landslide with 49 percent of the votes.

"Dear friends, there's a big battle behind us, we secured a historic victory - we got a chance, we created a chance for us to protect Hungary," he said.

With 84.7 percent of the votes counted, Fidesz and its small ally, the KNDP, had secured 133 of the 199 seats in the legislature, the minimum needed for a two-thirds majority. The right-wing nationalist Jobbik party placed second with 26 seats, while a Socialist-led, left-wing coalition ran third with 20.

Only two other parties, former Prime Minister Ferenc Gyurcsany's Democratic Coalition and the green Politics Can Be Different party were expected to surpass the 5 percent threshold needed to form a parliamentary faction.

That means the nationalist Orban will again control the two-thirds majority in the legislature and have the power to change the constitution and pass constitutional laws.

The final distribution of seats will, however, have to wait until the final accounting of ballots for constituent seats. The votes of around 270,000 people who did not vote in their constituency are expected to be counted in the coming week.

With his disdain for the "globalist elite," Orban's nationalism has made him a poster boy for "patriots" everywhere both in Europe and the United States. At 26 as a law student in Budapest in 1989, the country boy became a household name in Hungary in the dying days of communism with a stirring speech demanding democracy and that Soviet troops go home. Co-founding the Fidesz, Orban was one of "new" Europe's brightest stars, becoming a deputy in newly democratic and optimistic Hungary in 1990.

Soon he shed his image as a radical youth and began molding Fidesz into a new force of the center-right keen on family and Christian values. It paid off in spades, and with Orban developing a rare knack for connecting with ordinary voters, he duly became prime minister in 1998 at just 35. His first period in office was rocky, however, and Orban lost to the Socialists in 2002 and again in 2006 before bouncing back, older and wiser, in 2010 - and with a vengeance.

This time, armed with a two-thirds majority in parliament, Orban implemented a root-and-branch reform of Hungarian state institutions and introduced a new constitution steeped in conservative values. Critics at home and abroad, including in Brussels and Washington, worried that the sweeping changes undermined the independence of the judiciary, muzzled the press and rigged the electoral system. Orban maintains that he was repairing years of left-wing mess, while his unorthodox economic policies like special "crisis" taxes on foreign companies helped Hungary balance the books.

He was re-elected in 2014, again with a supermajority, and Europe's migrant crisis the following year saw Orban morph into a lightning rod for opposition to German Chancellor Angela Merkel's "open-door" refugee policy. As hundreds of thousands of people streamed through Hungary bound for Western Europe, and with Budapest train stations resembling squalid refugee camps, Orban erected a fence on Hungary's border with Serbia. Illegal immigration - a "Trojan horse for terrorism" - was made punishable by lengthy jail terms. Orban felt it was Hungary's duty to defend the outer frontier of Europe, just as it did against the Ottomans in the 17th century, Orban implied.

Orban's sometimes lurid rhetoric against immigrants resulted in February in a spat between the government and the U.N.'s top human rights official, Zeid Ra'ad Al Hussein, who accused Orban of xenophobia and racism.

However, Orban's message struck a chord with some voters, such as pensioner Ilona Gubacsi, who said she hoped the result would mean "no migrants coming to Hungary and for things to remain as they are."

But others disagreed, such as kindergarten nurse Szilvia Nagy in the northeastern town of Gyoengyoes, who said: "I would like to change the government because I desire a nicer future."

His strident stance has turned Hungary, along with Poland's like-minded government, which has also raised concerns with its own reforms, into a headache for Brussels and the rest of the EU. Jaroslaw Kaczynski, head of Poland's governing party, said the Hungarian election was a decision "about the road to freedom, not only in Hungary but also in Europe and the world." Orban is now the darling of nationalists across Europe, from Poland to France's Marine Le Pen to Geert Wilders of the Netherlands.

His latest target, meanwhile, is George Soros, the Hungarian-born U.S. financier. Orban has plastered Hungary with billboards urging resistance to the alleged "Soros plan" of destroying Europe with immigration and the civil society groups that the 87-year-old funds. For critics, the imagery and language used in this campaign against the Jewish Soros have made some wonder whether they are anti-Semitic in nature; an accusation that the prime minister has vehemently denied. Hungary's enemies, Orban said in a recent speech "are not national, but international. They do not believe in work, but speculate with money. They have no homeland, but feel that the whole world is theirs."

"The road to reform is never easy," Poland's Morawiecki tweeted, adding, "The support of the majority of society shows that it's worthwhile to make the effort."

"I wish you success, for Hungary and for Europe," said Morawiecki, leader of the Law and Justice (PiS) government, which has cultivated close ties with Orban.

"We regard ourselves responsible for what happened, (and) we have acknowledged the decision of voters," he told Socialist supporters and journalists.

Opposition parties feared that another super-majority would allow the autocratic leader to more easily push through constitutional changes, continue his crackdown on civic groups that he claims work against Hungarian interests and further strengthen his grasp on the highly centralized state power structure.

The last few weeks of the campaign were marked by allegations of money laundering and corruption leveled at Orban's inner circle, often published in media owned by oligarch Lajos Simicska, an erstwhile Orban ally who fell out with him after Fidesz's 2014 election victory.

Orban avoided public debates with opponents or speaking to independent media, preferring instead to address supporters at carefully stage-managed events where he hammered home his anti-immigration message.

The opposition's campaign had focused on corruption and deteriorating public services, as well as the government's failure to stem a high level of emigration which has seen the country's population fall under the symbolic 10 million mark.