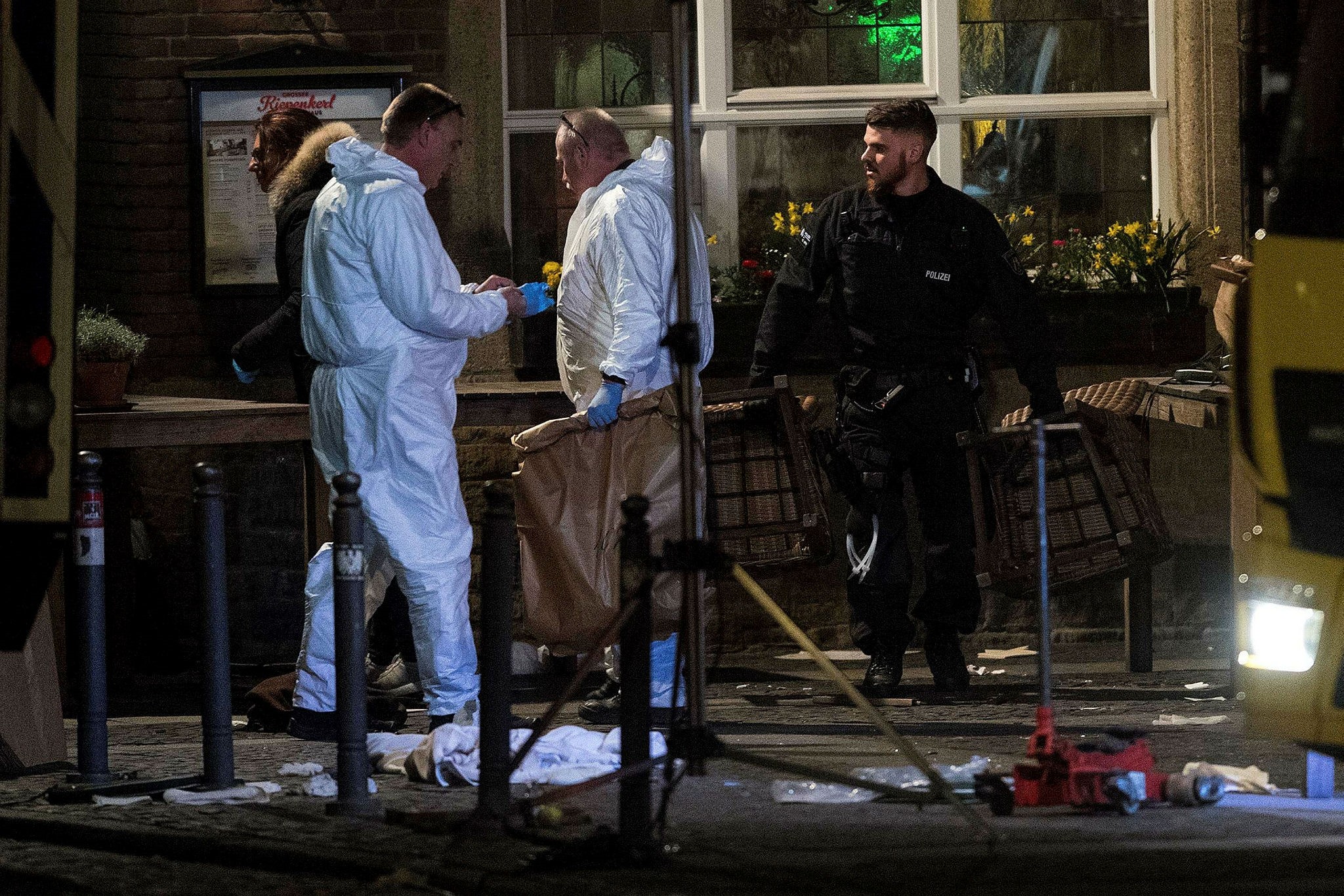 Investigators working at the square where a man rammed his car into a crowd, killing two and injuring several others in Muenster, Germany, April 8.
by Daily Sabah with Wires Apr 09, 2018 12:00 am

The man who drove a camper van into a group of people in the German city of Muenster was possibly motivated by far-right ideology, according to an investigation, that revealed the growing far-right threat

The man who drove a camper van into a group of people sitting outside a restaurant in the German city of Muenster on Saturday acted alone and appears to have had mental health problems, the regional interior minister said yesterday. The attacker had ties to far-right groups, but whether it played a role in the attack was unclear, German broadcaster ZDF reported, citing unnamed security sources.

The man killed two people when he plowed the vehicle into people seated at tables outside the Grosser Kiepenkerl eatery, a popular destination for tourists in the old town of the university city in western Germany. He then shot himself dead.

"We now know it was in all likelihood a lone perpetrator, a German," Herbert Reul, interior minister of North Rhine-Westphalia, home to Muenster, told reporters.

"There are lots of indications the person in focus had [psychological] abnormalities. This must be carefully investigated," he said after paying his respects to the victims with national Interior Minister Horst Seehofer and state premier Armin Laschet.

There was no evidence of any link to militancy and the suspect was not a refugee, Reul said.

Soon after the violent attack, Germany's far-right politicians blamed it on refugees, and shared anti-immigrant and Islamophobic messages on social media.

Far-right extremists reportedly stepped up their attacks against refugees in the country. More than 200 attacks on refugee shelters by far-right groups were reported across Germany in 2017. Far-right offenses in Germany have spiked to their highest level since 2001, amid growing anti-refugee and anti-migrant sentiment in the country triggered by propaganda from far-right parties.

The rise of the right-wing populist Alternative for Germany (AfD) party, which came in third in Germany's general election with nearly 13 percent of the vote, has compounded tensions. Founded more than four years ago as a eurosceptic party, the AfD has since lurched to the right, adopting a staunchly anti-Islam and anti-foreigner party platform. The AfD has enjoyed a surge of support in the wake of Chancellor Merkel's controversial decision two years ago to open the nation's borders to refugees stranded in Hungary.

In another example of the rising far-right threat in Germany, David Sonboly, 18, who killed nine people at a Munich shopping center in 2016, was motivated by extremist right-wing political ideology and anti-immigrant sentiments, investigators revealed a year later. Contrary to police findings, investigators believed that the motivation of the attacker was disregarded and underestimated, according to the German public broadcaster Deutsche Welle (DW) in October 2017. German Police had concluded that Sonboly was a deranged lone gunman obsessed with mass killings who drew no inspiration from right-wing militancy. However, it was later revealed that the gunman was obsessed with far-right extremist Anders Behring Breivik, whose massacre of 77 people in Norway came exactly five years before his own shooting rampage.