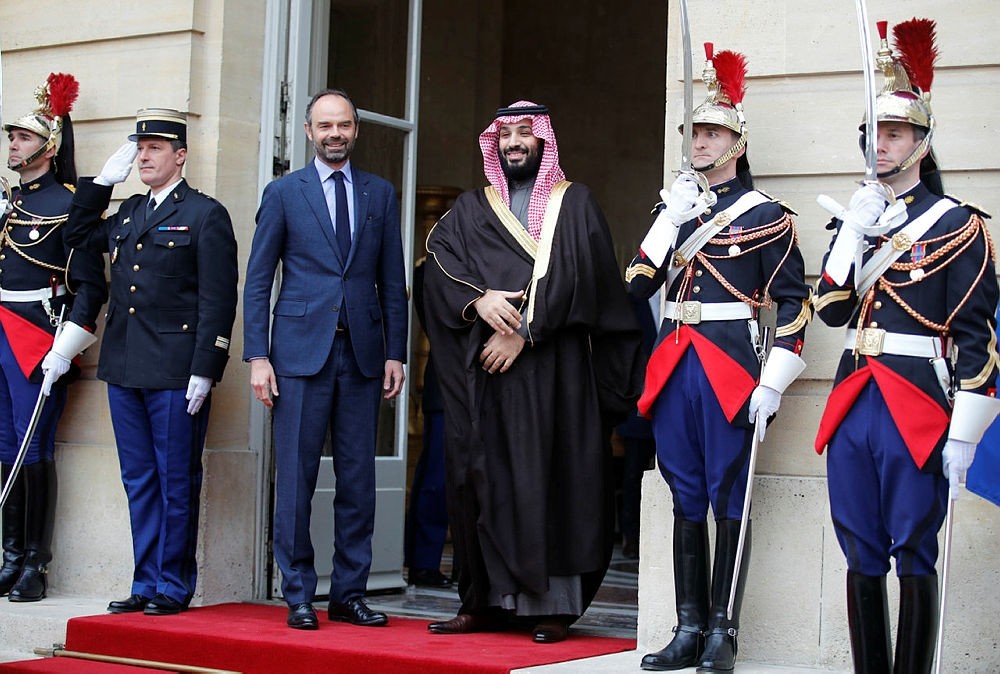 Saudi Crown Prince Mohammed bin Salman and French President Emmanuel Macron had a private dinner in a restaurant in the Louvre museum on Sunday, a source in the Elysee Palace said.

The source said on Monday that the two leaders are planning a "strategic document" that will result in future business contracts, as the prince promotes his plan to wean the kingdom off oil exports.

Macron and the prince, who is seen as the main power broker in the Saudi monarchy, toured an exhibition of works by 19th-century painter Eugene Delacroix before their dinner, the source added.

Mohammed bin Salman recently returned from a tour of the United States, where he promoted his Vision 2030 programme to diversify the Saudi economy.

On Monday he was holding a meeting and working lunch with Prime Minister Edouard Philippe, and on Tuesday he was due to meet Macron again.

The visit is not without controversy: A group of human rights organizations wrote to Macron last week urging him to press the prince to end airstrikes that have repeatedly hit civilian targets in neighbouring Yemen.

Saudi Arabia is leading an alliance of mainly Gulf states against Yemen's Houthi rebels, who are aligned to Riyadh's regional arch-rival, Iran.

In 2015, the UN said a Saudi-led air campaign was responsible for the majority of the conflict's civilian casualties at that point. In February, it put the total number of civilian deaths at nearly 6,000.

Saudi Arabia was France's second-biggest client for both arms deliveries and new arms orders in 2016, according to official data.

Mohammed bin Salman, who was promoted to the position of crown prince in June by his father King Salman, has sought to portray himself as a reformer at home and abroad.

He is thought to be behind rules allowing women to drive and opening cinemas. The kingdom has also loosened rules on foreign investments.

France is hoping to invest alongside Saudi Arabia in fields such as new technology and renewable energy, rather than just occasionally bidding for contracts in the kingdom as in the past, a source in the Elysee Palace said ahead of the visit.

The prince's visit to France is much shorter and more low-key than his trip to the US, where he found President Donald Trump receptive to his tough anti-Iran stance.

The prince is seen as the key figure behind the Saudi-led Yemen campaign. He is also thought to be behind Saudi's moves to isolate neighbouring Qatar, which supports regional movements that Riyadh is opposed to, such as the Muslim Brotherhood.

Macron, by contrast, has resolutely supported a 2015 deal on Iran's nuclear programme, denounced by Trump since he took office. The French president has also repeatedly called for a reduction of tensions in the region.