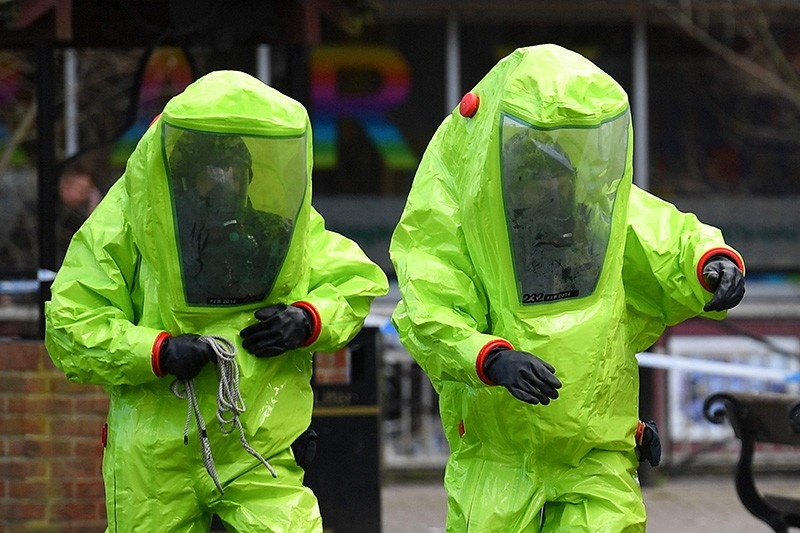 In this file photo taken on March 8, 2018 members of the emergency services in green biohazard encapsulated suits work to afix the tent over the bench where Sergei and Yulia Skripal were found in critical condition in Salisbury. (AFP Photo)
by Compiled from Wire Services Apr 11, 2018 12:00 am

Yulia Skripal, who is recovering after being poisoned together with her father, former Russian spy Sergei Skripal, in England last month, said on Wednesday she does not want assistance from the Russian Embassy.

The younger Skripal, who was released from hospital on Tuesday, said she had "been made aware of my specific contacts at the Russian Embassy who have kindly offered me their assistance in any way they can."

In a statement shared by Britain's Metropolitan Police, she added, "At the moment I do not wish to avail myself of their services, but, if I change my mind I know how to contact them."

Skripal said her father is "still seriously ill" and that she is also "still suffering with the effects of the nerve agent used against us."

"Most importantly, I am safe and feeling better as time goes by," she added.

Yulia Skripal was visiting her father when the attack took place. Sergei Skripal was imprisoned in Russia for selling secrets to British intelligence in the 1990s but was exchanged in a spy swap in 2010.

London blames Moscow for the attack, an accusation vehemently denied by the Russian government which has requested access to the Skripals as Russian citizens.

Responding to reports that the pair may be resettled, the Russian embassy to London said: "Secret resettlement of Mr and Ms Skripal, barred from any contact with their family, will be seen as an abduction or at least as their forced isolation."

Sergei Skripal's niece, Viktoria Skripal, has spoken to Russian media about the poisoning and last week saw her application to visit the UK rejected, with officials saying it did not comply with immigration rules.

Yulia Skripal on Wednesday cast doubt on her cousin's account, saying: "Her opinions and assertions are not mine and they are not my father's."

"I thank my cousin Viktoria for her concern for us, but ask that she does not visit me or try to contact me for the time being," she said.