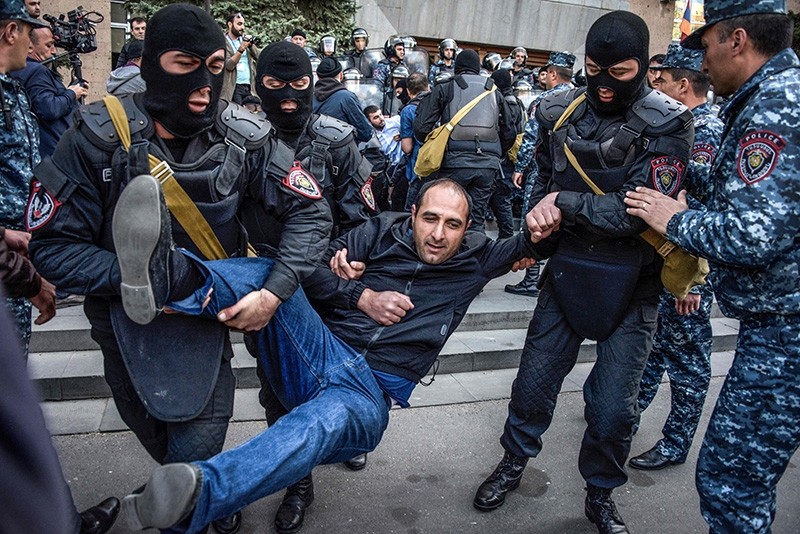 Armenian special police forces detain opposition supporters during their anti-government rally in front of the entrance to government headquarters in central Yerevan (AFP Photo)
by Compiled from Wire Services
Apr 20, 2018 12:00 am

Police arrested some 230 people as opposition supporters staged sit-ins and attempted to block traffic in Armenia's capital Friday, the latest protests at what they brand a power-grab by ex-president Serzh Sargsyan.

Demonstrators led by opposition politician Nikol Pashinian, a member of Armenia's federal parliament, have been attempting for a week to block major streets in the city.

Opposition politicians have decried changes to the constitution that will increase the incoming prime minister's powers.

An estimated 15,000 protesters gathered at a major square on Tuesday to contest what opposition politicians have denounced as an unfair retention of power.

On Friday, demonstrators waved national flags and held up placards reading "Sargsyan is a dictator" as protests in the impoverished former Soviet country went into their eighth day.

"We are supported by 80 percent of the people and the time has come for Serzh Sargsyan to realize that he has to leave," opposition lawmaker and protest leader Nikol Pashinian told reporters at the start of a rally Friday evening.

Protesters earlier tried to block roads in response to repeated calls by Pashinian to paralyze traffic, but police prevented those attempts.

A police spokesman told AFP more than 233 people were detained in Yerevan.

Protesters also rallied in the second city of Gyumri where they attempted to block the main road leading to the capital.

The Caucasus country's religious leaders called on the opposition to end street protests and negotiate with authorities after a meeting with Sargsyan, news agencies reported.

"We are praying for the situation to gradually stabilize," the head of the Armenian Apostolic Church Karekin II was quoted as saying.

Constitutional amendments approved in 2015 have transferred power from the presidency to the premier.

Sargsyan in effect remained the country's leader by taking the post of prime minister after a parliament vote this week.

Opposition supporters have criticized the 63-year-old leader over poverty, corruption and the influence of powerful oligarchs.

The spokesman for Sargsyan's ruling Republican Party said the newly elected prime minister would not step down.

"We respect citizens' right to freedom of assembly but we rule out the possibility of the prime minister resigning," Eduard Sharmazanov told journalists late Thursday.

"One should not underestimate the challenges Armenia's police are facing in maintaining law and order, but the ongoing protests are no justification to arbitrarily detain people," it said in a statement late Thursday.

Under a new parliamentary system of government, lawmakers elected Sargsyan as prime minister on Tuesday after he served a decade as president from 2008.

"The mechanism we are using is peaceful disobedience," he told AFP in an interview.

Analysts say that the opposition so far lacks resources to oust the leader even though huge public anger has built up in recent years.

The number of demonstrators has somewhat dwindled over the past few days, down from roughly 40,000 who took to the streets Tuesday when Sargsyan was elected by parliament.

On Thursday, more than 15,000 protesters staged a rally outside government headquarters as Sargsyan chaired his first cabinet meeting since the controversial vote.

On Monday police used stun grenades against protesters who tried to break through a barbed wire cordon to get to the parliament building.

Authorities said at the time that 46 people, including six police and Pashinian sought medical help.

The country's new president, Armen Sarkisian -- no relation to now prime minister Serzh -- was sworn in last week but his post is largely ceremonial under the new system of government.

A former military officer, Serzh Sargsyan has been in charge of the landlocked South Caucasus nation of 2.9 million people for a decade.

After he was first elected in 2008, 10 people died and hundreds were injured in bloody clashes between police and supporters of the defeated opposition candidate.