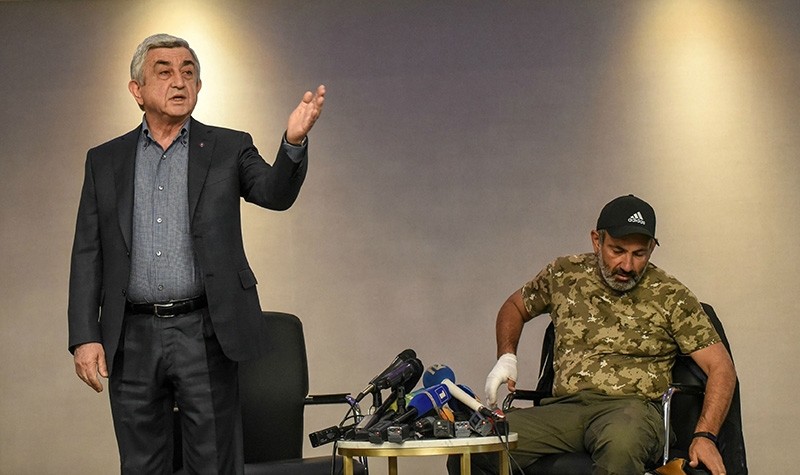 Armenia's political turmoil deepened on Sunday with the detention of anti-government protest leader Nikol Pashinian, shortly after Prime Minister Serzh Sargsyan stormed out of talks with him on the tenth day of mass rallies against his rule.

Pashinian and two other opposition politicians "were detained as they were committing socially dangerous acts", the prosecutor general's office said in a statement.

As a lawmaker, Pashinian is protected by parliamentary immunity and cannot be arrested without the approval of fellow MPs.

On Sunday morning, Sargsyan stormed out of talks with Pashinyan, accusing him of "blackmail".

The televised meeting between the premier and Pashinian lasted only a couple of minutes before the premier walked out.

"I came here to discuss your resignation," Pashinian, the leader of the opposition Civil Contract party, had told the prime minister in front of the cameras.

"This is not a dialogue, this is blackmail, I only can advise you to return to a legal framework... Otherwise you will bear the responsibility" for the consequences, replied Sargsyan, a former military officer.

"You don't understand the situation in Armenia. The power is now in people's hands," Pashinian hit back.

Sargsyan said the Civil Contract party "can't speak on behalf of the people", having scored only 8 percent in recent parliamentary election, before he walked out of the meeting room in Yerevan's Marriott hotel.

Pashinian then vowed to "step up pressure" on Sargsyan to force him to resign and called on police officers to "lay down arms and join in the protests".

The EU delegation to Armenia issued a statement expressing "concern" over the rapidly unfolding crisis.

"The European Union reiterates that it is crucial that all parties show restraint and responsibility and urgently seek a negotiated solution," the statement said.

Tens of thousands of people had flocked to central Yerevan's Republic Square on Saturday to protest against Sargsyan's rule.

Armenian President Armen Sarkisian, who succeeded Sargsyan, met Pashinian at the square and two men had a brief consversation.

In the evening, about 50,000 demonstrators gathered in the capital's central Republic Square.

Opposition supporters have criticized the 63-year-old leader over poverty, corruption and the influence of powerful oligarchs.

After Pashinian's detention, thousands of protesters gathered in Yerevan's Republic Square outside the government's headquarters, which were cordoned off by riot police.

Dozens of people were detained, an AFP journalist reported from the scene.

Pashinian had earlier announced the "start of a peaceful velvet revolution" in the landlocked South Caucasus nation of 2.9 million people.

He called for a nationwide campaign of "civil disobedience," urging civil servants "to stop obeying Sargsyan".

Constitutional amendments approved in 2015 have transferred power from the presidency to the premiership.

After Sargsyan was first elected in 2008, 10 people died and hundreds were injured in post-election clashes between police and supporters of the defeated opposition candidate.