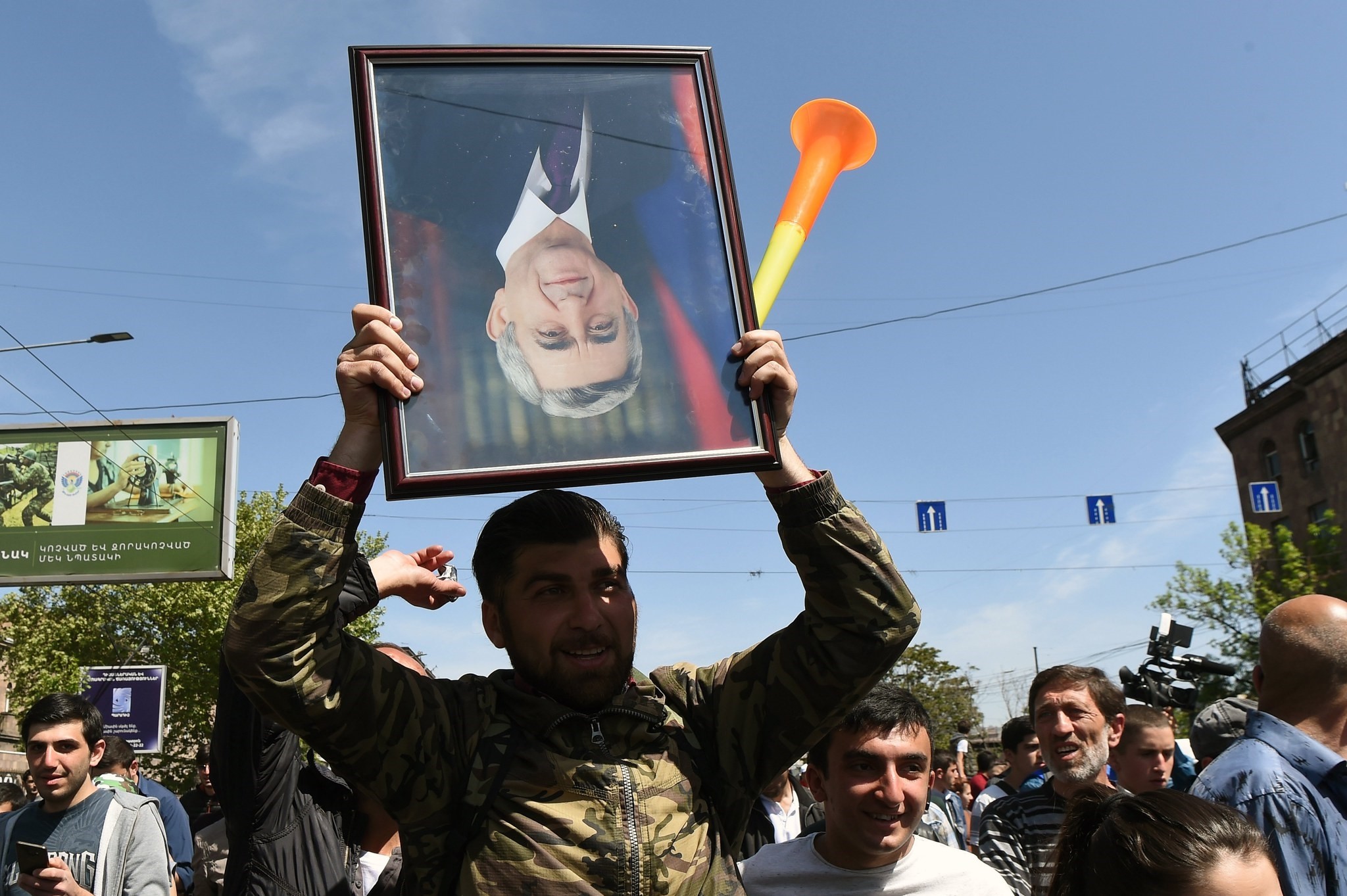 After more than a week of protests that led the country into further political turmoil, Armenian Prime Minister Serzh Sargsyan resigned

Armenian Prime Minister Serzh Sargsyan resigned unexpectedly Monday, an apparent move to end massive anti-government protests. The surprise move, announced on his website, followed 10 days of protests in the capital, Yerevan, against Sargsyan's appointment as prime minister, which is part of a transition to a new governmental system that reduces the powers of the presidency and bolsters those of the premier.

"I got it wrong," Sargsyan said in a statement issued by his office. "In the current situation there are several solutions, but I won't choose any of them. It's not my style. I am quitting the country's leadership and the post of prime minister of Armenia."

Opposition politician Nikol Pashinian, a federal parliament member who was detained over the weekend, was released Monday with fellow protesters. Police detained three opposition leaders, including Pashinian, and nearly 200 protesters on Sunday, drawing a rebuke from the European Union. "So has everyone now understood that we have won?" Pashinian told supporters shortly after his release in the capital Yerevan and before Sargsyan resigned.

Residents of the capital, Yerevan, poured out on the streets to celebrate his stunning departure. People hugged and kissed each other, and motorists honked their horns.

The pressure on the 63-year-old to quit increased sharply when unarmed Armenian soldiers joined the anti-government protests in the capital Yerevan. A group of uniformed former soldiers and veterans who fought in Nagorno-Karabakh, a breakaway region seized by Armenians from neighboring Azerbaijan in a conflict that broke out at the end of the Soviet era, marched with the protesters to parliament. "We condemn the participation of a group of servicemen from the peacekeeping brigade of the Armenian armed forces who, violating the law, took part in an organized rally," the defense ministry said.

Hundreds of opposition supporters took to the streets of Armenia's capital Monday. On the 11th day of demonstrations in the ex-Soviet country, young men in small groups briefly blocked roads in Yerevan and shouted slogans such as "Join us!" and "Victory" and the name of protest leader Pashinian as drivers beeped their horns in support. Hundreds of students, some medical students in white coats, also marched arm-in-arm through the streets, holding Armenian flags.

Alexander Iskanderian, director of the Caucasus Institute in Yerevan, told The Associated Press that the protests drove Sargsyan into a corner:

"The protests in the past couple of days have swelled to a point that you either had to use violence or find another way out," Iskanderian said.

Russian officials and state television have been cautious in commenting on the unrest in Armenia. In the past, Moscow decried anti-government rallies in neighboring post-Soviet nations as example of hostile Western interference.

In what appeared to be the first official Russian reaction to the resignation of the Armenian premier, Russian Foreign Ministry spokeswoman Maria Zakharova lauded Sargsyan's decision as a move to unify the nation.

"The people who have the strength to keep respect toward each other despite crucial differences and stay united even in the most difficult moments of its history is a great people," Zakharova wrote on her Facebook account. "Armenia, Russia is always with you!"

Pashinian had earlier announced the "start of a peaceful velvet revolution" in the landlocked South Caucasus nation of 2.9 million people. Last Wednesday, more than 16,000 rallied in central Yerevan's Republic Square, vowing to mount a nationwide campaign of "civil disobedience" in opposition to the Kremlin-backed Sargsyan who was elected by parliament to the post of prime minister after a decade serving as president. Pashinian said that the protest movement's objective was to "change power" in Armenia through a nationwide campaign of "civil disobedience" and permanent sit-in protests inside government buildings.

Sargsyan's ally Armen Sarkisian, a former prime minister and ambassador to Britain, was sworn in as president last week after being elected by parliament in a vote that was meant to herald the start of a power shift to the premier and parliament.

Armenia, a landlocked country of 3 million people in the Southern Caucasus, seceded in 1991 from the then Soviet Union but still relies on Russia for aid and investment. Many Armenians accuse the government of corruption and mismanaging the economy.

Sargsyan grew up in the then-Soviet republic of Azerbaijan. He began his political career as a Communist official but became prominent when he joined Armenian separatists in seizing his native Nagorno-Karabakh region in a still unresolved conflict which cost more than 30,000 lives.

He headed the mountainous region of Nagorno-Karabakh's self-defense forces between 1989 and 1993 and famously refused to evacuate his family from the war zone. He played a key role in negotiations over the area.

"He has played a huge role in the Karabakh war and in the negotiation process," political analyst Tatul Hakobyan told AFP.

He went on to serve as minister of defense and national security and became prime minister in 2007. He was later elected president in 2008.

In foreign policy, Sargsyan remained a close ally of Armenia's former master Russia but was also able to maintain relatively warm relations with the European Union and with NATO.

"He has been able to keep Armenia's age-old balance between the West, Europe and Russia which is unprecedented in the post-Soviet space," said sociologist Gevorg Pogosyan.

In 2008, he even made an attempt to warm ties with Turkey, with whom Yerevan is at odds over the World War I genocide claims of Armenians by their Ottoman rulers in 1915.

The two countries then signed a protocol normalizing relations but earlier this year Sargsyan admitted the talks had got nowhere.

At home, corruption in the police and judiciary, as well as poverty, left an increasing number of Armenians dissatisfied with Sargsyan's rule.

"People took to the streets because of poverty, unemployment, corruption and because nothing is changing," analyst Hakobyan said.

All of Armenia's parliamentary and presidential elections under his rule were accompanied by opposition-led protests.

After Sargsyan was first elected in 2008, 10 people died in bloody clashes between police and supporters of the defeated opposition candidate.

He served the maximum two presidential terms and enacted controversial constitutional amendments to turn the country into a parliamentary republic with a powerful prime minister.

The ruling Republican Party and the government-friendly Dashnaktsutyun Party then formally nominated Sargsyan as a candidate for prime minister despite protests and parliament elected him to the post last week.

Sarkisian plays chess well and is the president of the Armenian chess federation. Chess has been a mandatory subject in Armenian schools under his rule.