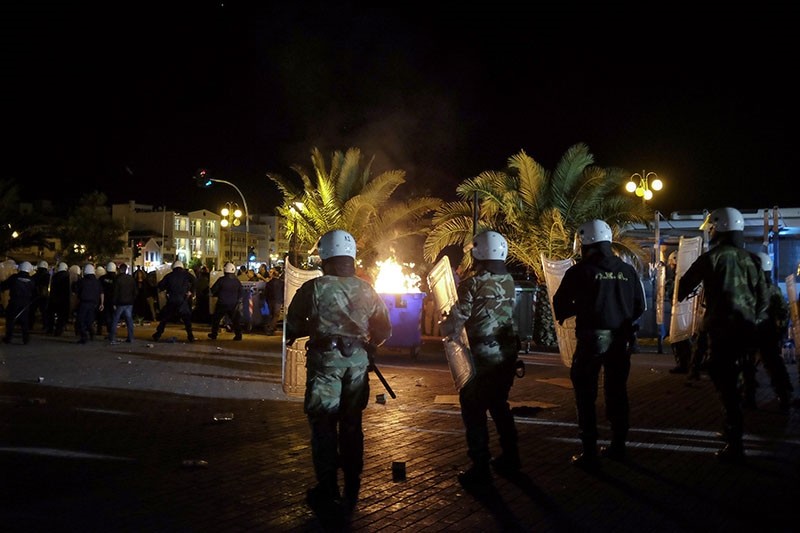 In this Sunday, April 22, 2018 photo, riot police try to keep local protesters away from migrants during clashes at the port of Mytilene, Greece. (Eurokinissi via AP)
by Compiled from Wire Services Apr 23, 2018 12:00 am

A far-right group launched a violent attack overnight on migrants staging a sit-in protest on the Greek island of Lesbos, injuring around a dozen people, police said Monday.

The violence erupted late Sunday after members of the radical "Patriotic Movement" gathered on the central square of the island's main city Mytilene, where some 200 Afghan asylum-seekers launched a sit-in protest last week against their miserable living conditions.

Despite police presence, the situation soon escalated as the extremists started throwing bottles, fire crackers and lighting flares at the migrants, set fire to trash bins and shouting slogans like "Burn them alive" and "Throw them in the sea".

Tensions spiraled further when left-wing activists arrived in support of the migrants and started fighting with the far-right supporters.

The clashes raged all night until security forces used tear gas to disperse the crowd and evacuate the square, forcing the Afghans to return to the island's overcrowded migrant camps.

Authorities say at least 10 people were hospitalized and more than 100 detained.

In a pre-dawn operation, police forced the protesting migrants into buses and transported them to the Moria camp. The operation, according to local media, lasted less than 10 minutes.

The migrants, who had camped at the town's Sappho Square for the last five days, were demanding freedom of movement which, for most, means relocating to other EU countries once they are granted asylum.

State television, quoting hospital officials, said most of the injured were migrants and that none of the cases was serious.

The protest by asylum-seekers began after a high court ruled last week that migrants arriving on Greek islands from Turkey could travel to the Greek mainland while their asylum applications were being processed. The ruling does not have retroactive effect, meaning that migrants already there not be allowed to leave.

Before the clashes, the island's mayor Spyros Galinos had renewed a plea to the government to reduce high levels of overcrowding at camps on Lesbos and other islands.

"There are 10,000 asylum-seekers and our (municipality) has a population of 27,000. Our island once again has been held hostage," the mayor wrote in a letter to the Greek ministers of migration affairs and public order. "Lesbos can't take this any longer."

The governing left-wing Syriza party said extreme right "thugs" had been behind the overnight attacks.

"This was a well-organized action, with murderous intent, by specific extreme right, criminal and hooligan elements that have nothing to do with the island or its traditions," the party statement said.

Over 6,500 migrants are currently stranded on Lesbos, far exceeding the 3,000 spots available in the camps.

More than one million people, mainly fleeing war in Syria, crossed to Greece from Turkey in 2015 after the onset of the bloc's worst migration crisis since World War II.

The influx has been sharply cut since the European Union signed a controversial deal with Turkey in 2016 to send back migrants.

However, more than 13,000 migrants are still languishing in camps on five Greek islands until their asylum claims can be processed. This has fueled despair and sparked protests and outbreaks of violence.

Greece, a country of 11 million people, recorded 58,661 applications last year, making it the member state with the highest number of asylum seekers per capita, according to official data.