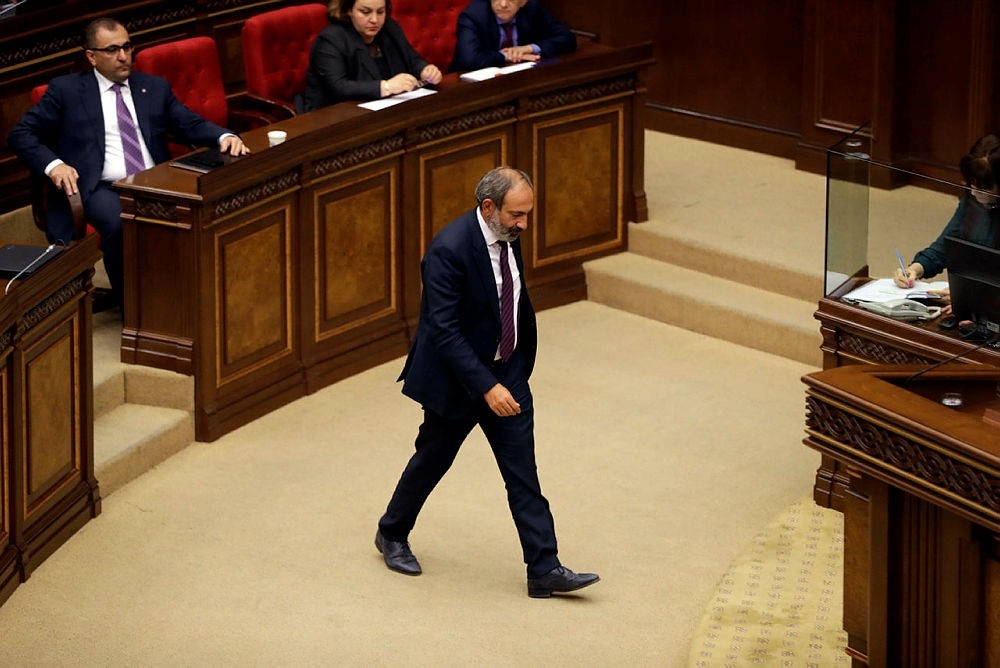 Opposition lawmaker Nikol Pashinian, center, during a parliament session to choose a replacement of Prime Minister in Yerevan on Tuesday, May 1, 2018. (AP Photo)
by Compiled from Wire Services May 01, 2018 12:00 am

Armenian opposition leader Nikol Pashinian on Tuesday urged his supporters to launch a campaign of civil disobedience and block key transport links including an airport after he failed in his bid to get elected as prime minister.

"From 8:15 am tomorrow (Wednesday) all roads should be blocked, I announce a general strike," Pashinian told tens of thousands of supporters gathered in the capital Yerevan's Republic Square.

"A revolution of love and tolerance is continuing," he said, also urging people to turn out for a huge rally Wednesday evening as the crowds chanted "Nikol! Nikol!".

The Armenian parliament had rejected making the opposition lawmaker who led weeks of anti-government rallies the country's prime minister Tuesday as tens of thousands of supporters awaited the vote outside.

After a nine hour session, the chamber voted 45-55 against appointing Pashinian, who was the only candidate nominated to replace the ex-president who resigned as prime minister due to the protests.

"The political force which declared a war against its own people has destroyed itself," Pashinian said in parliament after the vote.

"No one will be able to take victory away from the people."

Between 30,000 and 40,000 opposition supporters spent the day peacefully rallying outside the parliament building to support Pashinian. The vote's outcome enraged many of them.

"They spat on us but we're not going to tolerate this," bakery owner Samvel Rustamyan, 46, said while jeering and punching his fists in the air. "This government just won't resign on its own will. It's tens of thousands of us, and we need to them go. We can't take this anymore."

Pashinian told colleagues in parliament before the vote that Armenia would be roiled by a "political tsunami," if the majority party did not support him.

"I would like to warn you that your attempts to interpret the tolerance of the popular movement as weakness could cause unexpected and undesirable consequences," Pashinian said, addressing members of the ruling Republican Party from the rostrum. "Get sober until it's too late, because your behavior could cause a political tsunami."

The Armenian Constitution dictates that parliament will convene next week for another vote.

Pashinian spearheaded the protests that forced Serzh Sargsyan to resign after less than a week as premier. Sargsyan led Armenia as president for 10 years until term limits forced him to step down and was made prime minister in mid-April.

The opposition in this Caucasus Mountains country saw Sargsyan's move into the prime minister's chair as an attempt by him to stay in power indefinitely.

While Pashinian was the only candidate for prime minister, the chamber is controlled by Sargsyan's Republicans. Not a single Republican lawmaker appeared to have voted for him.

Before the vote, lawmakers grilled Pashinian during a question-and-answer session. Later, dozens of them took the floor to speak about Pashinian's candidacy.

Republican deputies accused Pashinian of exploiting the young people who have been his core supporters. Some said Pashinian does not have a program to offer the country.

Opposition members of parliament joined Pashinian in warning that a vote against him would be a vote against the tens of thousands of people who joined the anti-government rallies in recent weeks.

"The only thing that people on this square will accept is Pashinian's win, changes in the country and the ouster of the old clan," said engineer David Babayan, 47, who came to the Republic Square with his wife and 10-year-old son.