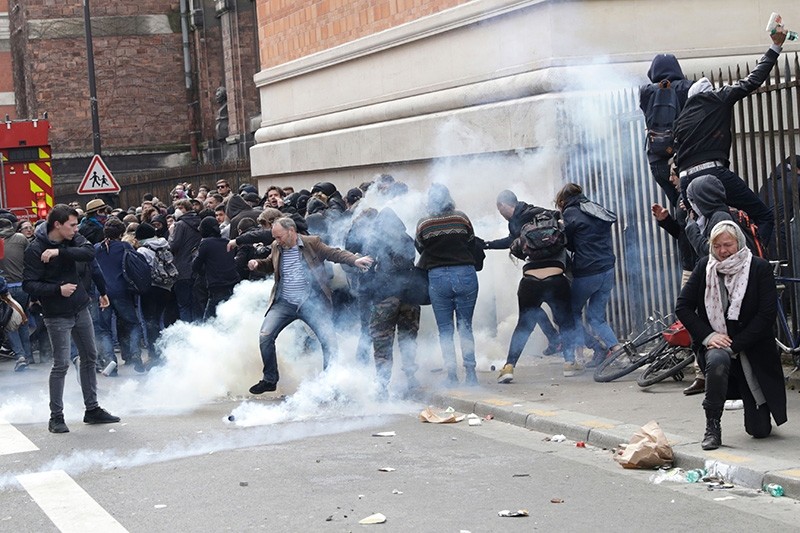 Protestors flee from clouds of teargas during a demonstration on the sidelines of a march for the annual May Day workers' rally in Paris on May 1, 2018. (AFP Photo)
by Compiled from Wire Services May 01, 2018 12:00 am

French riot police used water cannon and teargas on Tuesday against hundreds of hooded protesters after they smashed shop windows and hurled petrol bombs at the start of an annual May Day rally in Paris, while at least 109 protesters were reportedly detained Wednesday.

Police said Wednesday that 109 people are in custody after May Day protests against reforms by President Emmanuel Macron turned violent in the French capital.

Those in custody Wednesday are suspected of offenses that include carrying prohibited weapons that fire projectiles. Several people were injured.

Paris Police Prefect Michel Delpuech said that violence was carried out by masked attackers from a libertarian group called the Black Blocs that numbered around 1,200 people in total.

He added that "the desire of the radical activists was to spiral the day out of control."

Police had warned on Monday of possible clashes with far-left anarchist groups, known as Black Blocs, after a call on social media to make Tuesday a "Revolutionary Day".

Authorities said some 1,200 hooded and masked protesters dressed in black had turned up on the sidelines of the annual planned demonstration by labour unions.

Some participants smashed the windows of a McDonald's restaurant and set furniture inside on fire as the demonstration in the French capital heated up.

Television cameras captured vandals overturning a car on Tuesday afternoon and setting it on fire.

During the march, workers and students waved anti-capitalist flags and brandished banners with phrases such as "Risks to Disrupting the Peace," ''Let's Derail the Government" and "Macron Gives Us a Dark Hatred."

President Emmanuel Macron, elected last May on a promise to shake up France's economy and spur jobs growth, is locked in a battle with the trade unions over his plans to liberalize labor regulations.

Organizers hope nationwide May Day protests will send a robust riposte to the centrist Macron's plans to end some worker protections.