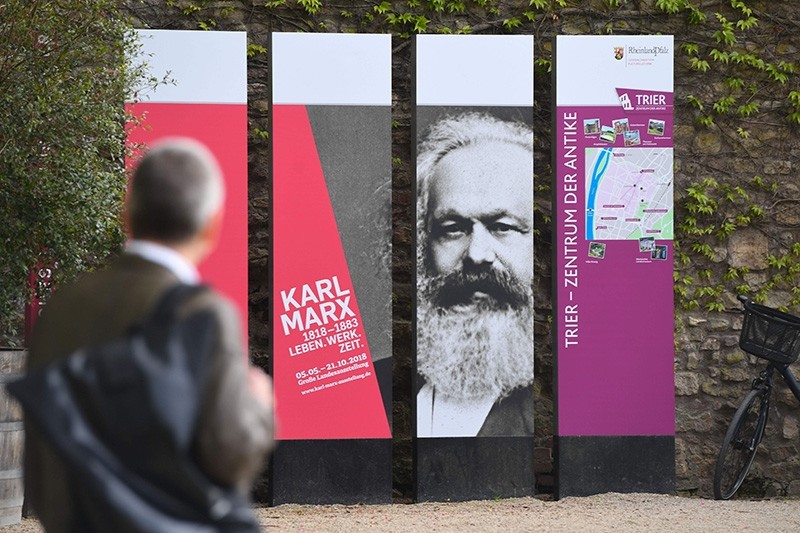 A man walks past boards displayed in Trier, southwestern Germany, as part of the celebrations marking 200 years of the birth of German philosopher Karl Marx on May 3, 2018. (AFP Photo)
by French Press Agency - AFP
May 05, 2018 12:00 am

Germany marks the 200th anniversary of Karl Marx's birth on Saturday, but celebrations risk being marred by protests as the revolutionary philosopher remains a divisive figure almost three decades after the fall of the Berlin Wall.

Marx's birth city of Trier will lead commemorations of the man officials describe as a "great son of the city," with 600 events planned around the 19th-century scholar hailed for foretelling the ills of capitalism.

The centerpiece of the festivities will be the unveiling of a 5.5-metre (18-foot) tall statue of the philosopher -- a gift from communist China -- with dignitaries including a Chinese delegation and the head of Germany's Social Democratic Party to attend.

But it is also before the statue that the association representing victims of communism have called protests against the thinker they blame for inspiring Stalinist regimes.

"We want to protest loudly against the unveiling of the Marx statue and raise our voices against the glorification of Marxism," said Dieter Dombrowski, president of the Union of the Victim Groups of Communist Tyranny.

For Dombrowski, Trier's decision to accept the gift from China is "disrespectful and inhuman" to those who suffered under communist regimes.

Far-right party AfD, which enjoys strong support in former East German states, has meanwhile separately called a silent march with the theme "Get Marx off the pedestal" through Trier's city center.

With the far-right in the melee, counter-protesters are getting ready to march too against the nationalists.

'Neither glorify nor vilify'

Born May 5, 1818 in the western German city close to the border with Luxembourg, Marx developed his theories as the Industrial Revolution gathered pace.

His works such as the Communist Manifesto and Das Kapital subsequently became compulsory course material in countries under communist regimes, with revolutionaries from Vladimir Lenin to Mao Zedong seizing on Marx's ideas.

Due to Marx's reputation as the Father of Communism, he was largely derided in the former capitalist West Germany during the Cold War.

But since reunification, and particularly over the past decade, unbridled capitalism and its discontents have fueled renewed interest in Marx's work.

His theories on inequality and oppression of the working class find resonance today as societies once again see social and political upheaval.

Rainer Auts, director of a company set up to oversee the exhibitions on Marx's life, works and legacy, said that more than a quarter century after reunification, it was now time to reexamine the philosopher who left Germany deeply divided.

"We're not looking to glorify or vilify him. But we want to show him as a person in his time, as well as show where he may have gone wrong," Auts told AFP.

But the gigantic statue gifted by Beijing has sparked accusations of a city seeking to capitalize on Chinese tourists or investments.

Rejecting the claims, Trier mayor Wolfram Leibe said it is simply "a gesture of friendship" from China.

"There isn't a single Chinese company in Trier. We have no economic relations with China and that means we made this decision autonomously. We are not susceptible to blackmail," he told AFP.

Leibe acknowledged that the statue could become a vandalism target, but said: "that isn't going to give me sleepless nights. It can simply be cleaned up."

The row over Marx and his legacy has also taken on a further political dimension over the AfD's planned silent march.

A group of counter-protestors want to make themselves heard against the far-right party, saying the AfD's controversial ideas against migrants constituted a "violation against humanity".

At the same time, the counter-protesters are critical of China's present.

"Nationalism and an authoritarian dictatorship rule in China. Trier city would have been better off using its own funds to build the long-overdue Marx statue," said the counter-protesters, which include several local left-leaning groups.

Wading into the debate on Thursday, German President Frank-Walter Steinmeier said Marx should remain as he has been in history -- controversial.

"I think that us Germans, in 2018, should neither inflate Marx nor banish him from our history," said Steinmeier.

"We should neither be afraid of Marx nor build gold statues of him. In short, Marx should remain contentious."