Russia detains over 1,000 in nationwide protests against Putin's inauguration 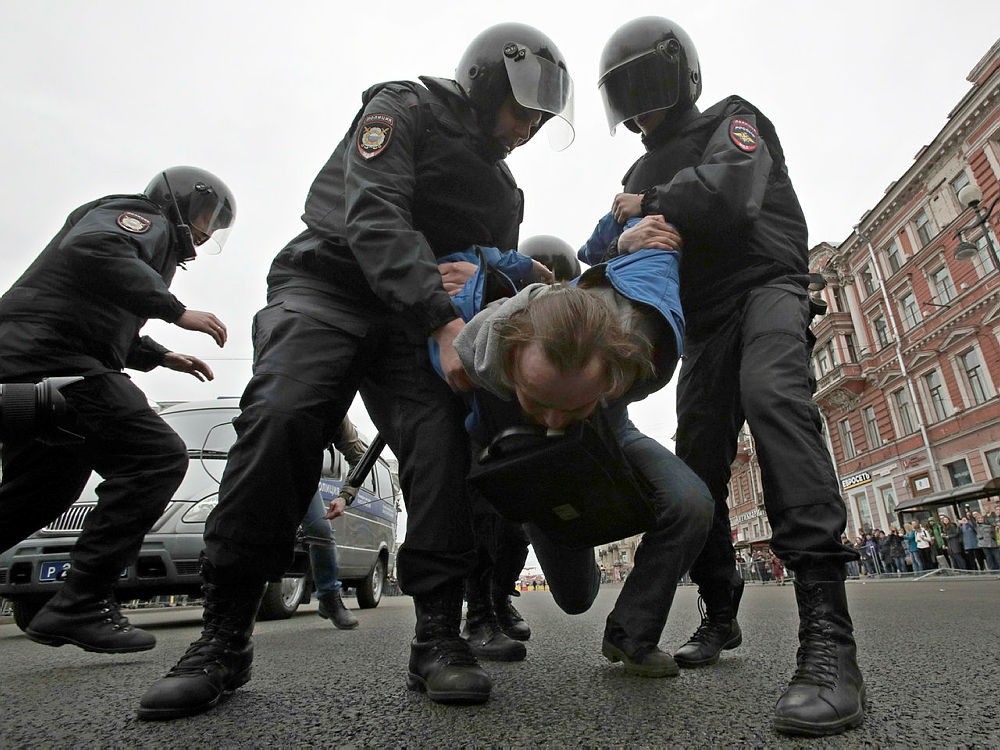 Russian police detain a protester at a demonstration against President Vladimir Putin in St.Petersburg, Russia, May 5, 2018. (AFP Photo)
by Compiled from Wire Services May 05, 2018 12:00 am

Police in Russia on Saturday detained over 1,000 people across the country at protests against President Vladimir Putin, the OVD-Info human rights monitor said.

Opposition leader Alexei Navalny, who was himself detained, had called on Kremlin critics to take to the streets ahead of Putin's inauguration for a fourth presidential term to register their opposition to what Navalny says is Putin's autocratic tsar-like rule.

The monitor, OVD-Info, wrote on social media that it had received reports that at least 1,029 people had been detained in 19 different cities across the country. It said 475 of the detentions had taken place in Moscow.

Putin won a landslide re-election victory in March, extending his grip over the world's largest country for another six years until 2024, making him the longest-lasting leader since Soviet dictator Josef Stalin who ruled for nearly 30 years.

"If you think that he is not our Tsar, take to the streets of your cities," read a message from opposition leader Alexei Navalny encouraging people to demonstrate ahead of the protests.

"We will force the authorities, made up of swindlers and thieves, to reckon with the millions of citizens who did not vote for Putin."

Navalny, who has been repeatedly detained and jailed for organizing similar protests in the past, called for rallies in more than 90 towns and cities, including Moscow and St Petersburg where protests were due to start at 1100 GMT.

Navalny activists posted photographs on social media of hundreds of protesters taking part in rallies in Russia's Far East and Siberia, and OVD Info, a human rights organization that monitors detentions, said it had received reports of police detaining around 20 people across the country.

"Putin has already been on his throne for 18 years!" one activist told a crowd in the city of Khabarovsk.

Putin, 65, has been in power, either as president or prime minister, since 2000.

Backed by state TV and the ruling party, and credited with an approval rating of around 80 percent, he is lauded by supporters as a father-of-the-nation figure who has restored national pride and expanded Moscow's global clout with interventions in Syria and Ukraine.

The authorities regard most of the protests as illegal, arguing that their time and place was not agreed with them beforehand. Police have broken up similar demonstrations in the past, sometimes harshly, detaining hundreds.

Putin has dismissed Navalny, who was barred from running in the presidential election on what he said was a trumped up pretext, as a troublemaker bent on sowing chaos on behalf of Washington. Prime Minister Dmitry Medvedev, a close Putin ally, has called Navalny a political charlatan.

Putin is due to be inaugurated on Monday in a Kremlin ceremony heavy on pomp and circumstance.

With almost 77 percent of the vote and more than 56 million votes, his March election win was his biggest ever and the largest by any post-Soviet Russian leader, something he and his allies say gave him an unequivocal mandate to govern.

However, European observers said there had been no real choice in the election, and complained of unfair pressure on critical voices. Critics like Navalny accuse Putin of overseeing a corrupt authoritarian system and of illegally annexing Ukraine's Crimea in 2014, a move that isolated Russia internationally.