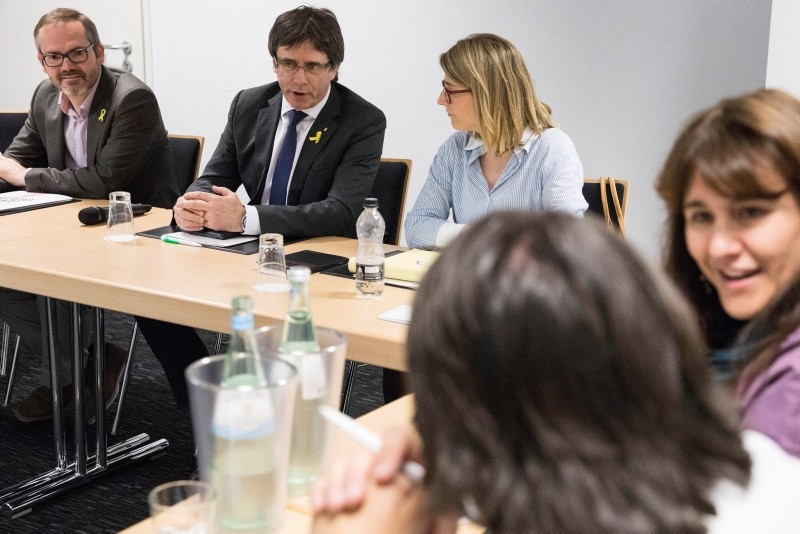 Catalan separatists, meeting in Berlin, vowed Saturday to attempt once again to get their leader-in-exile Carles Puigdemont reinstalled as president of the Spanish region while adding that they don't want to hold fresh elections.

However an attempt will be made to install the former Catalan president by May 14 at the latest, he added after talks with Puigdemont after talks in Berlin.

Puigdemont was sacked by Madrid after Catalonia made a declaration of independence last year following a regional referendum not sanctioned by the Spanish government.

The Catalan independence leader then left for Belgium where he lives in self-imposed exile. An earlier attempt to get him reinstated was blocked by a Spanish court.

Puigdemont was detained in Germany in March after Spain issued a European arrest warrant against him. He was later released on bail.

On Friday the pro-independence Catalan parliament backed a law allowing him his investiture while abroad, something the Spanish government has ruled out.

Ines Arrimadas, leader in Catalonia of the anti-independence Ciudadanos party, has rejected this "Puigdemont law," describing it as "tailor-made for a fugitive."

Since he fled Spain Puigdemont has been a divisive figure among the separatists.

On Saturday the influential grassroots independence group ANC announced the results of an opinion poll, saying that most of its members support the return of the "legitimate president."

However, if this proves impossible, ANC supporters want a new government formed without a return to the ballot boxes.

The regional parliament must elect a new president by May 22 or organize fresh elections.

If Puigdemont is not reinstalled, his supporters will propose that ANC leader Jordi Sanchez, currently imprisoned in Madrid over the failed independence bid, be given the job.

But last month Spain's Supreme Court rejected a request by Sanchez to be let out of jail and sworn in as the regional head.

If that option proves impossible "we will open the door to another alternative," Pujol told reporters in Berlin, adding only that "none of the names you have speculated about are on the table."

The Spanish press has mentioned economist Elsa Artadi, who is an ally of Puigdemont.