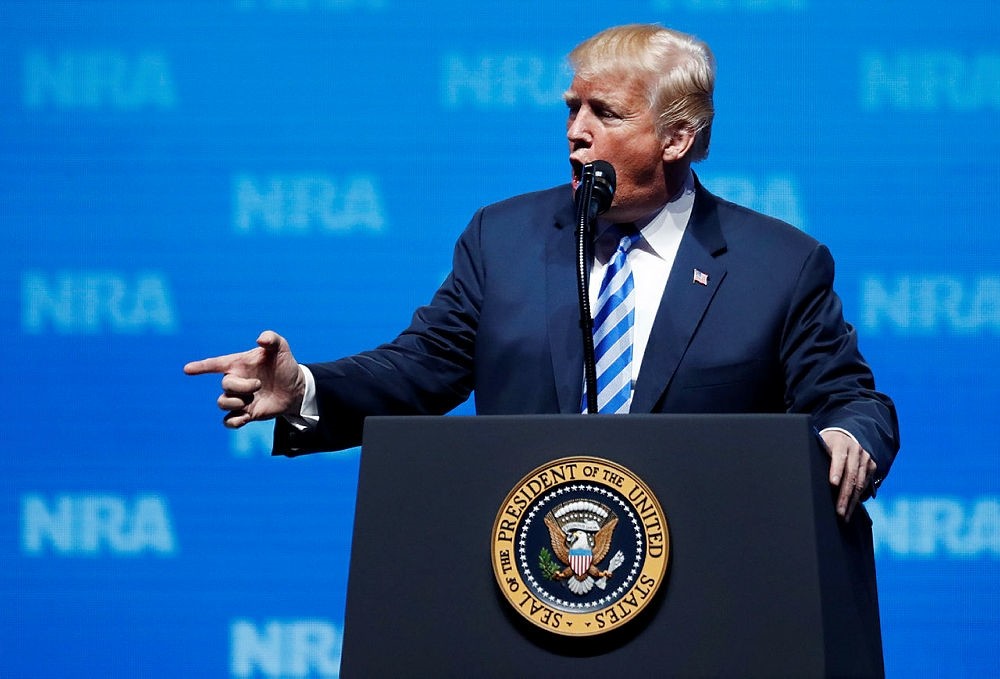 U.S. President Donald Trump pretends to shoot with his hand while speaking about the Paris shootings to the NRA Forum at the annual meetings inside the Kay Bailey Hutchison Convention Center in Dallas, Texas, U.S., May 4, 2018. (EPA Photo)
by Associated Press
May 06, 2018 12:00 am

France has condemned remarks by U.S. President Donald Trump about the 2015 attacks in Paris and called on him to show respect for the victims of the worst bloodshed on French soil since World War II.

The foreign ministry voiced its "firm disapproval" of the comments, in criticism amplified by former leaders, as well as survivors of the atrocity who unleashed their fury on Twitter.

French anger erupted this weekend at Trump's comments to the National Rifle Association — and especially at his trigger-firing hand gesture imitating the Bataclan attackers. Multiple extremists with explosive belts and assault weapons killed 130 people in the 2015 attacks on the Bataclan, Paris cafes and the national stadium.

The comments from Trump came the week after French President Emmanuel Macron visited Washington as guest of honor for a state visit which saw both the leaders eager to stress their friendship.

But it is not the first time Trump has targeted Paris, implying on the campaign trail in 2016 that the City of Lights was overrun by foreigners and extremists.

Victims group 13 Onze 15, which represents people injured in the 2015 violence, had demanded a response from the French government after the latest salvo.

"Our reaction is first of all disgust over unacceptable clowning around," its leader Philippe Duperron told the Huffpost website while asking for "an official reaction".

Other victims including Emmanuel Domenach wrote expletive-filled messages directed at the US president on Twitter.

France's government vigorously defended its gun controls and pressure mounted on Macron to demand an apology from Trump despite their friendly relationship.