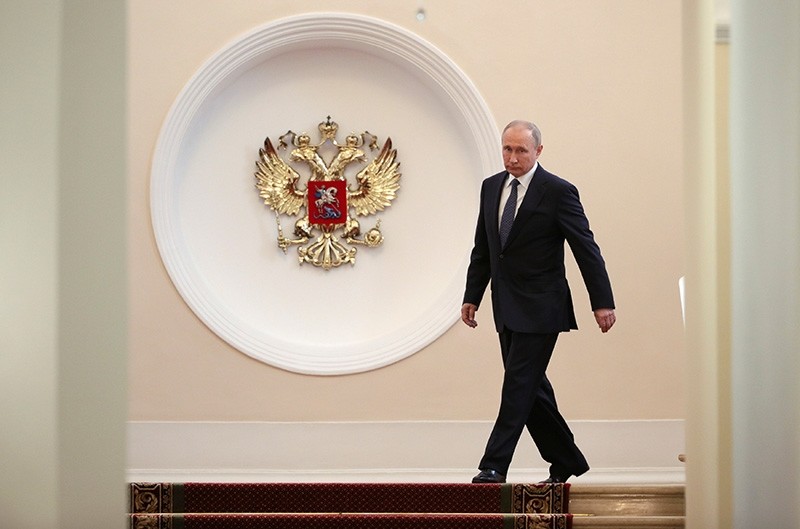 Russian President Vladimir Putin walks before an inauguration ceremony at the Kremlin in Moscow, Russia May 7, 2018. (Reuters Photo)
by Compiled from Wire Services May 07, 2018 12:00 am

Vladimir Putin was sworn in as Russia's president for a historic fourth term at a ceremony in the Kremlin on Monday, extending his almost two-decade rule by another six years.

In a ceremony in an ornate Kremlin hall, Putin said improving Russia's economy following a recession partly linked to international sanctions would be a primary goal of his next term.

"Now, we must use all existing possibilities, first of all for resolving internal urgent tasks of development, for economic and technological breakthroughs, for raising competitiveness in those spheres that determine the future," he said in his speech to thousands of guests standing in the elaborate Andreevsky Hall of the Grand Kremlin Palace and two adjacent halls.

Although Putin has restored Russia's prominence on the world stage through military actions, he has been criticized for inadequate efforts to diversify Russia's economy away from its dependence on oil and gas exports and to develop the manufacturing sector.

Putin, in power since 1999, was predictably re-elected in Russia's March presidential election with 76.7 percent of the vote.

"I strongly feel conscious of my colossal responsibility," Putin said at the ceremony before thanking Russians for their "sincere support" and "cohesiveness."

"We have revived pride in our fatherland," Putin said. "As head of state I will do all I can to multiply the strength and prosperity of Russia."

Putin effectively has been the leader of Russia for all of the 21st century. He stepped down from the presidency in 2008 because of term limits, but was named prime minister and continued to steer the country until he returned as president in 2012.

Putin on Monday put forward Dmitry Medvedev for the post of prime minister, the Kremlin said in a statement on its website.

Medvedev, who had been prime minister since 2012, resigned earlier on Monday along with the rest of the government in line with procedure. Putin was on Monday sworn in for a fourth term.

Medvedev's candidacy still has to be approved by the State Duma, or the lower house of parliament.

Earlier Russian state television showed Putin walking to his new Russian-made presidential limousine that drove him to the lavish ceremony.

Details of the new limousine have not been revealed, but it will become the heir to the Russian-made ZIL sedans that for decades transported Soviet leaders.

Putin has said that Russia should reduce its dependence on imported goods and technology, a drive that has gathered pace since Russia was hit by Western sanctions.