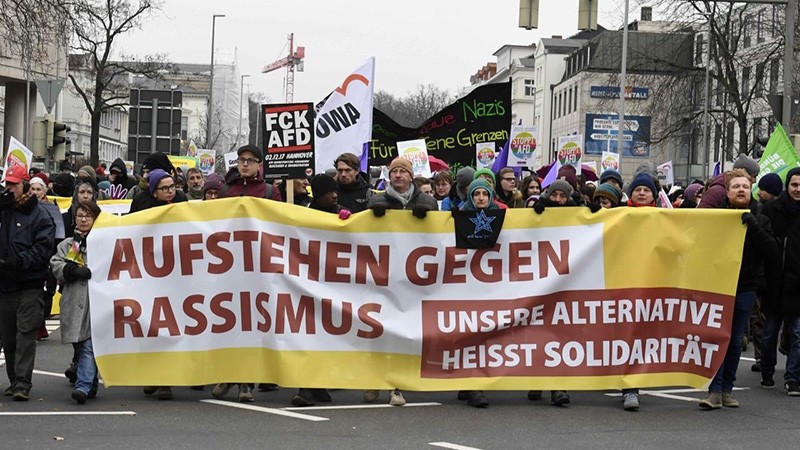 Protesters hold a banner during the congress of the anti-immigration party Alternative for Germany (AfD) in Hanover, Germany December 2, 2017. Sign reads , Stand up against racism!,. (Reuters Photo)
by May 08, 2018 12:00 am

Germany has admitted that it needs to deal with domestic racism, responding Tuesday to several countries' concerns about xenophobic and discriminatory attitudes in the country at a U.N. human rights review session.

"We know that we have to tackle racist positions and discriminatory views in various parts of our society," the German government's human rights representative, Baerbel Kofler, said in Geneva.

The session that was devoted to Germany was part of the Universal Periodic Review of human rights that U.N. member countries undergo about every five years.

"Racist statements on the internet are being prosecuted more vigorously," Kofler said, adding that authorities can ban groups with anti-democratic and inhuman ideologies.

At the U.N. session, Australia, Bahrain, Algeria and other countries lauded Germany for having taken in large numbers of refugees since 2015, and for implementing international human rights standards.

Other countries said they were worried about hate speech, attacks against foreigners, and about political parties that spread racist sentiments.

Berlin should train police to fight racism and discrimination, a Belgian representative recommended.

"Bahrain remains concerned about attacks against Muslims," a diplomat from that country said. Germany should train its prosecutors to detect hate crimes, she added.

In the past two years, the German Interior Ministry has recorded more than 5,700 attacks on refugees and refugee centers.

The German delegation stressed that these issues have already become key topics in police training, and that authorities are trying to hire officers with foreign roots to create a more diverse police force.

German representative Kofler was accompanies by German lawmakers, including Juergen Braun of the far-right Alliance for Germany (AfD).

On the sidelines of the Geneva meeting, Braun said that Germany has no major racism problem. The most pressing human rights problem is that the AfD is not adequately represented in the media, he said, and that the diversity of public opinion is shrinking.