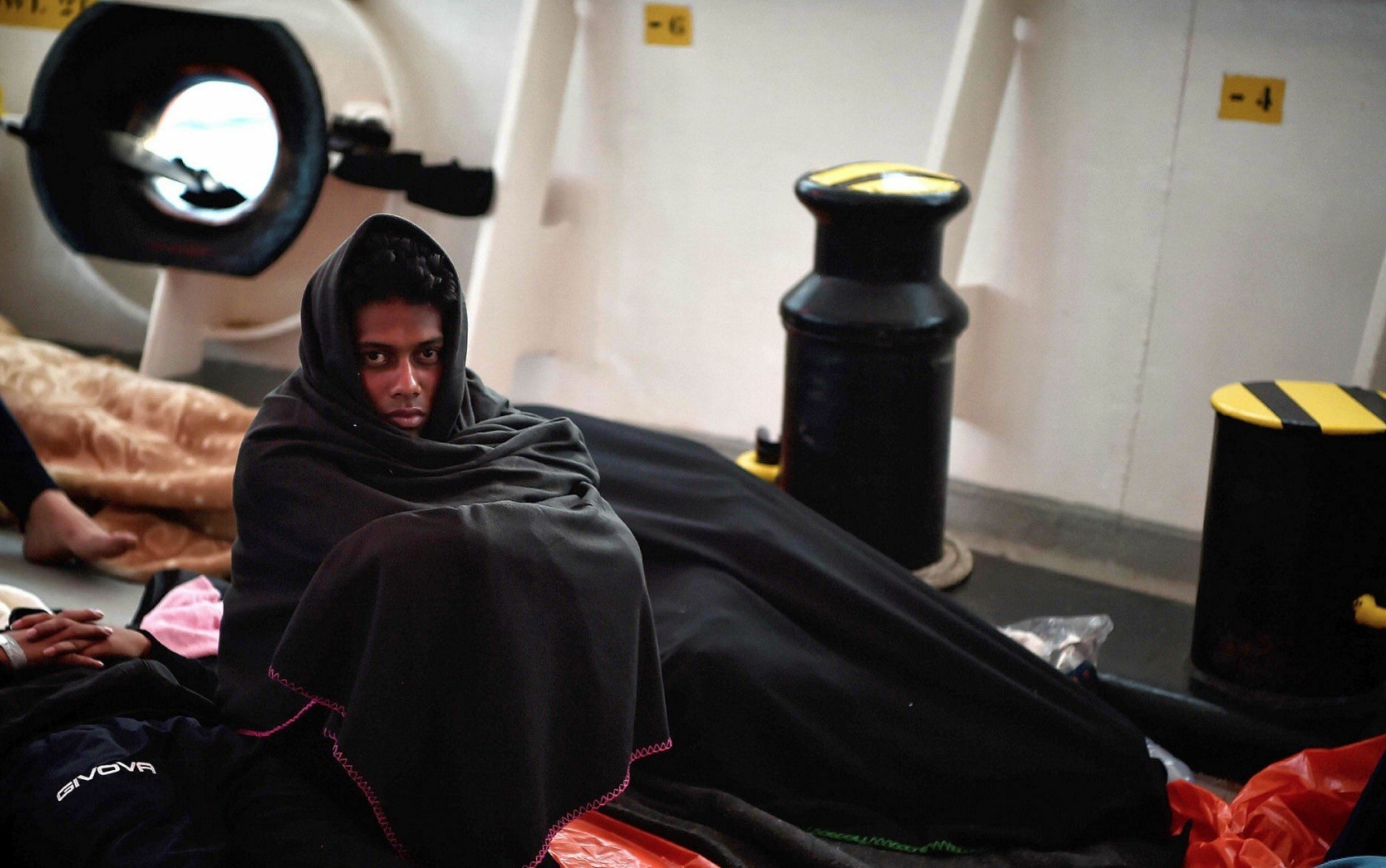 A migrant sits onboard a rescue vessel chartered by SOS-Mediterranu00e9e and Doctors Without Borders (MSF), some 30 nautical miles off Libya coast, May 8.
by Compiled from Wire Services May 10, 2018 12:00 am

Nigerian migrants who survived a deadly sea crossing last year filed a lawsuit against Italy for violating their rights by supporting Libya's efforts to return them to North Africa, their lawyers said on Tuesday.

The case, backed by legal and human rights organizations, poses a direct challenge to Italy's much-touted 2017 deal with Libya that has greatly reduced the number of asylum-seekers reaching Europe. Those backing the case told a press conference Tuesday that the policy, which involved using EU funds to train and equip the Libyan coast guard to patrol its coasts and bring migrants back, had subjected would-be refugees to slavery, torture and other degrading and inhuman treatment once back in Libya,

They argue that Italy was responsible for the abuses because it maintained "effective control" over the Libyan rescuers via its own coast guard coordination center in Rome and an Italian Navy vessel docked off Tripoli that coordinates rescues locally. And they said Italy was liable for the abuses because the violent conditions of Libyan detention centers where the migrants were held after their return were well-known and well-documented.

The case concerns the Nov. 6 sinking of a dinghy carrying 130 migrants, most of them Nigerian, off the coast of Libya. The Libyan coast guard — aboard the Italian-provided Ras Jadir vessel — arrived at the scene first but the German aid group Sea Watch 3 also responded with dinghies and rescued some 59 people. An estimated 20 people drowned. Two of the 17 Nigerians who filed the case to the Strasbourg court May 3 were rescued by the Ras Jadir and were brought back to Libya, where they reported being tortured and suffering other rights violations, said Loredana Leo of the Italian non-profit Association for Juridical Studies on Immigration, who is representing the migrants, as reported by AP.

This is the first lawsuit to be filed against Italy for its decision to back the Libyan Coast Guard. The country lost a case in the same court in 2012 for directly handing over migrants intercepted at sea to Libyan authorities. The lawsuit highlights a stand-off between humanitarian groups seeking to save lives on the open seas and Italian authorities backed by the European Union who are trying to stop people from making the dangerous crossing in the first place.

Italy has defended its support of the Libyan coast guard and held up as a success its 2017 agreement with the U.N.-backed Prime Minister, Fayez Serraj. Italian officials say it has saved lives and slowed to a trickle the number of migrants who risk their lives paying Libyan-based smugglers to ferry them to Europe aboard flimsy dinghies. The policy has worked: 6,731 migrants have arrived in Italy so far from Libya in 2018, 84 percent down from 2017 and 78 percent down from the year before, according to interior ministry figures. But human rights groups say that under its policy, Italy is shirking its international responsibilities to rescue migrants at sea and bring them to safety.

Italy has supplied Libya with seven refurbished vessels so far, and three more have been promised, while the EU has trained about 190 Libyan coastguards. Italy is also coordinating communications with the Libyan Coast Guard about possible boats in distress, according to court documents filed recently in Sicily. Between 2014 and 2017, more than 600,000 migrants arrived on Italian shores, but crossings have fallen dramatically since Italy and Libya signed a memorandum of understanding aimed at stemming the migration flow in February of last year. During the first five months of this year, arrivals from Libya fell more than 80 percent versus last year to 6,700 during, official data show. Over the same period, the Libyan Coast Guard intercepted almost 6,000 migrants and refugees. In 2017, the Libyans turned back almost 19,000.