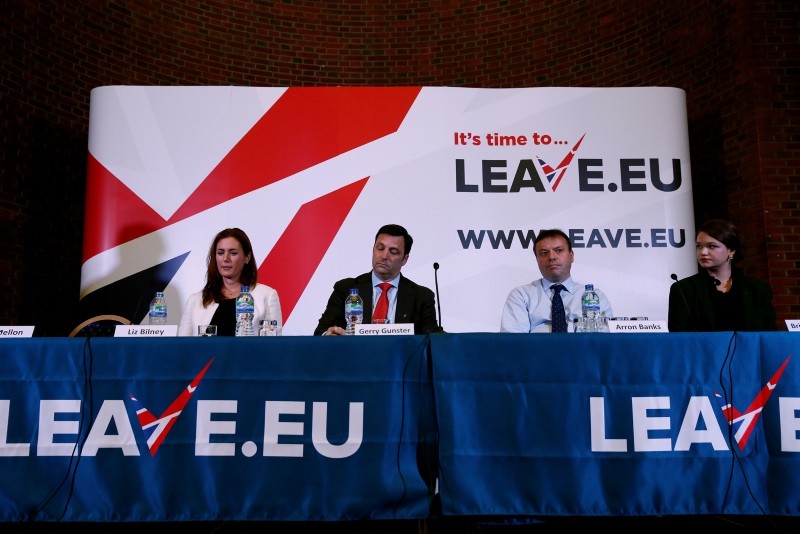 Brittany Kaiser of Cambridge Analytica, Brexit campaigner Aaron Banks, Gerry Gunster, a Washington-based strategist hired by the campaign, and Liz Bilney, CE of Eldon Insurance Services during a news conference in London, Nov. 18, 2015. (REUTERS)
by May 11, 2018 12:00 am

One of the main Brexit campaign groups in Britain's 2016 EU referendum was fined 70,000 pounds ($95,000) on Friday for incorrectly reporting what it spent and exceeding a limit on expenditure, the Electoral Commission said.

The commission said Leave.EU incorrectly reported what it spent at the EU referendum, failing to include at least 77,380 pounds in its spending return and thus exceeding a spending limit.

Such is the seriousness of the offenses that the commission said it suspected criminal offenses may have been committed by the person responsible and referred the case to the police.

"These are serious offenses," said Bob Posner, the Electoral Commission's director of political finance and regulation.

Leave.EU said the total alleged overspend represented less than 0.1 percent of the total campaign finance spend and was a risible attempt to portray the campaign as breaking the rules.

Arron Banks, the founder of Leave.EU, cast doubt on the Electoral Commission's impartiality, saying it was packed full of opponents of Brexit, who are sometimes known as "Remoaners".

"We view the Electoral Commission announcement as a politically motivated attack on Brexit and the 17.4 million people who defied the establishment to vote for an independent Britain," he said.

The commission said Leave.EU failed to include services it received from U.S. campaign strategy firm Goddard Gunster in a spending return. The commission also found Leave.EU inaccurately reported three loans it had received.

But the voting regulator said it had found no evidence that Leave.EU received donations or paid-for services from Cambridge Analytica, a political consultancy at the center of a storm over how Facebook data was used in political campaigns.

"The investigation found no evidence that Leave.EU received donations or paid-for services from Cambridge Analytica for its referendum campaigning and found that the relationship did not develop beyond initial scoping work," it said.

Leave.EU and Cambridge Analytica had previously denied working together on the Brexit campaign. Leave.EU was not the officially designated "leave" campaign group during the referendum.

"The Electoral Commission went big game fishing and found a few 'aged' dead sardines on the beach. So much for the big conspiracy!" Banks said. "What a shambles, we will see them in court."