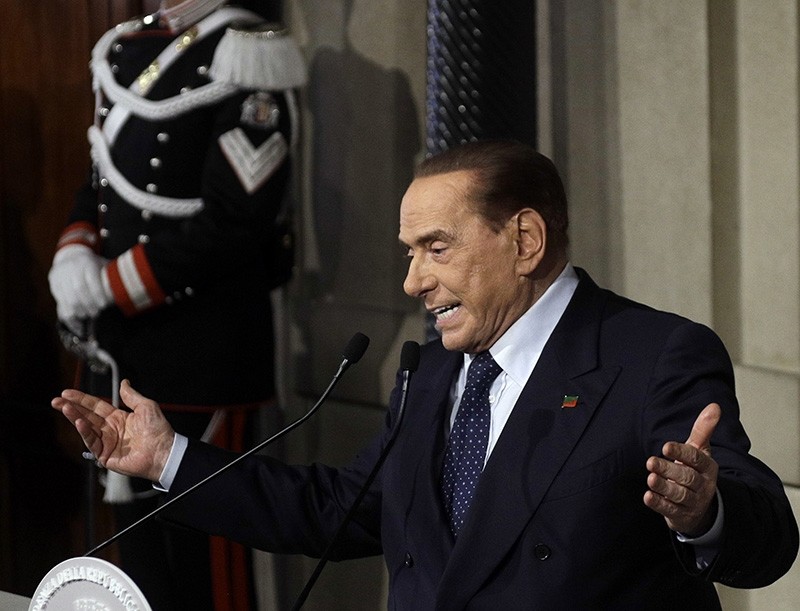 In this file photo dated Thursday, April 12, 2018, Forza Italia party's leader Silvio Berlusconi addresses journalists at the Quirinale presidential palace in Rome. According to Milan daily Corriere della Sera reporting May 12, 2018. (AP Photo)
by May 12, 2018 12:00 am

An Italian court has lifted a ban on three-time former prime minister Silvio Berlusconi running for elected office, Italy's media reported Saturday, clearing the way for yet another political comeback.

The decision comes as the leaders of the anti-establishment Five Star Movement (M5S) and the far-right League inch closer to a deal for a coalition government, just days after Berlusconi signaled he would not block such an agreement.

The Corriere Della Sera reported that a Milan court ordered the immediate "rehabilitation" of Berlusconi on Saturday, which "cancels all the effects" of his 2013 tax fraud conviction -- including a ban on holding elected office.

The ban on the 81-year-old media mogul, who is notorious for his "Bunga Bunga" sex parties, had originally been until 2019 and the court's decision taken on Friday was made a month ahead of schedule, the newspaper added.

It means that Berlusconi would be able to again run for prime minister if coalition negotiations fail and new elections are called. But it may be too late as M5S and the League seem to be making headway in their talks.

A right-wing coalition including the League and Berlusconi's Forza Italia party won 37 percent of the vote in March 4 elections, while M5S became Italy's largest single party with nearly 33 percent.

However, coalition talks were stalled for two months as M5S insisted the League, which led the right-wing coalition with 17 percent of the vote, ditch Berlusconi and his party.

On Wednesday, Berlusconi seemed to give the green light for the League to go ahead without him, and its leader Matteo Salvini and M5S's Luigi Di Maio are to meet in Milan on Saturday to continue talks.

They may report on their progress as early as Sunday to President Sergio Mattarella, who could then nominate the new prime minister on Monday.

Dubbed "the immortal," Berlusconi dominated Italian politics for more than two decades, and despite sex scandals, serial gaffes and legal woes, he made an astonishing return from political oblivion for the March vote.

However, coming second to the League in his conservative alliance was a humiliating setback for Berlusconi, who was forced out of parliament in 2013 after being convicted of corporate tax fraud.