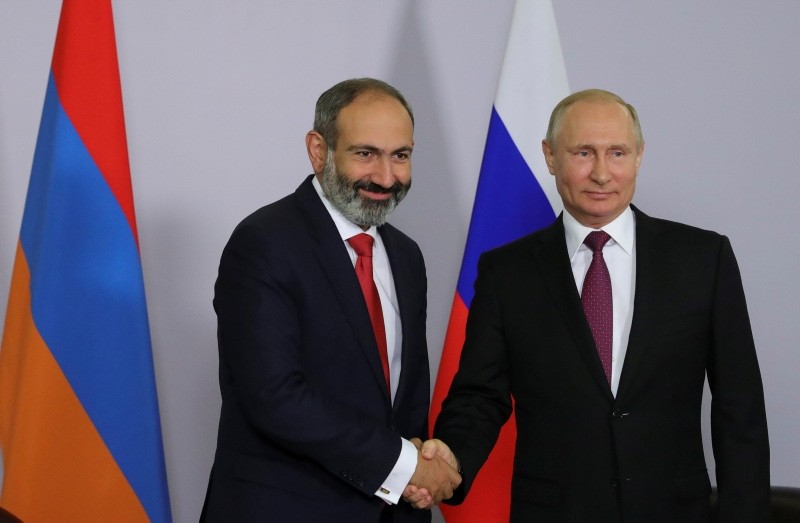 Russian President Vladimir Putin shakes hands with Armenian Prime Minister Nikol Pashinyan during their meeting in Sochi, Russia May 14, 2018 (Reuters Photo)
by May 14, 2018 12:00 am

The meeting, in the Black Sea resort of Sochi, was the first time the two men had met and followed Pashinian's election last week after weeks of street protests.

Some Western media had questioned whether Pashinian, a former journalist who won power by channeling public discontent over perceived political cronyism, would keep his country, a landlocked ex-Soviet state, closely aligned with Russia, which has a military base in Armenia and a long history of selling it weapons.

Pashinian, who had previously reassured Russian diplomats he did not plan to break with Moscow, was unequivocal on Monday, telling Putin he wanted the two countries to remain firm allies, for Armenia to buy more Russian weapons and for them to forge closer political and trade ties.

"We have things to discuss, but there are also things that do not need any discussion," said Pashinian.

"That is the strategic relationship of allies between Armenia and Russia. ... I can assure you that in Armenia there is a consensus and nobody has ever doubted the importance of the strategic nature of Armenian-Russian relations."

Pashinian said he wanted to inject new energy into developing already close ties between Moscow and Yerevan and thanked Putin for the way the Russian leader had handled the Armenian street protests.

Russia did not intervene militarily, but was in close contact with Armenian politicians during the protests.

"...We really appreciate the balanced position which Russia adopted during our domestic crisis," said Pashinian. "I think it was a very constructive position."

Armenia won independence from Moscow in 1991.

Putin told Pashinian Russia regarded Armenia as one of its closest allies in the region and wanted closer ties too.

"I want to wish you success in your post as head of the government," said Putin. "I hope our relations will develop as steadily as they have until now."