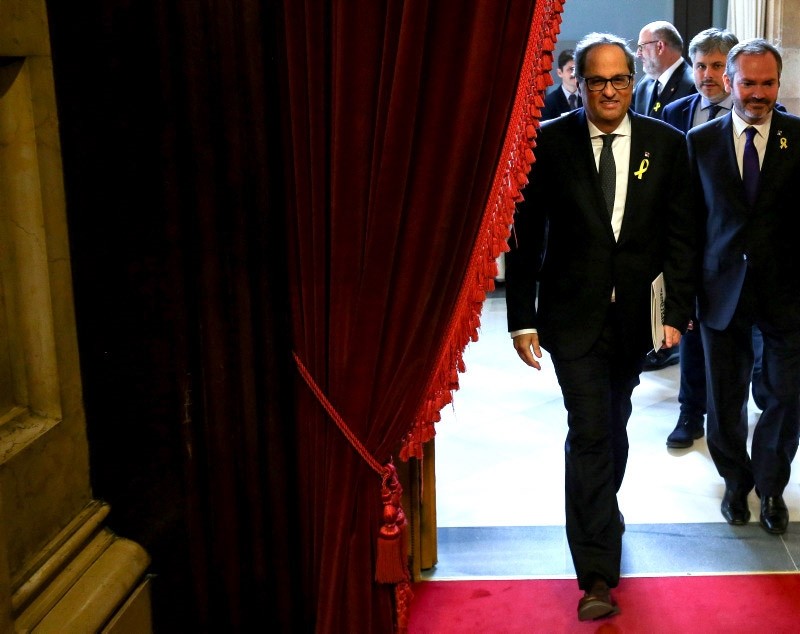 Quim Torra, a newcomer to politics who has long campaigned fiercely for independence in Catalonia, was appointed regional president Monday, vowing to keep fighting for a break from Spain.

A first round of voting on Saturday failed to achieve an absolute majority in favor or against his presidential bid.

"We will build a Catalan republic," he said in a brief speech after the vote, after which lawmakers sang Catalonia's anthem "Els Segadors" ("The Reapers" in English).

The 55-year-old father of three pledged to respect the result of an independence referendum held on Oct. 1 despite a court ban and said he would fight to "build an independent state in the form of a republic."

Catalan separatist authorities said 90 percent of the 2.2 million people who cast their ballot in the referendum -- out of 5.5 million eligible voters -- opted to break from Spain.

Prime Minister Mariano Rajoy called for "understanding and harmony" but warned that he would not tolerate any breaking of the law and Spain's constitution.

Torra's appointment paves the way for a new government after months of political limbo.

This, in turn, will lift a state of emergency direct rule imposed by Madrid on Oct. 27 after the majority separatist parliament made a short-lived unilateral declaration of independence.

Analysts warned the road ahead would be a rocky one, however, with politicians and voters split on the merits of trying to leave Spain.

After Torra's address Puigdemont appeared on Catalan television, speaking from Germany where he is free on bail pending a court decision on whether to extradite him to Spain.

He faces jail on rebellion charges for last year's secession bid if he returns.

In an interview published Saturday by Italian daily La Stampa, Puigdemont said Torra, as his designated successor, "takes power in provisional conditions and he is aware of that. From October 27, he will be able to call new elections."

Ines Arrimadas, leader in Catalonia of the centrist, anti-independence Ciudadanos party, has branded Torra a mere "puppet" for Puigdemont.

Torra tried -- and failed -- to be appointed on Saturday at an initial parliamentary vote that required an absolute majority.

During Monday's session, in which he only needed a simple majority, he outlined his new government's plans for education, health and employment.

On Saturday, he had focused entirely on independence.

During that speech, he lambasted European institutions for their "unacceptable silence" over the Catalan crisis.

He also said a "Republican council" would be created abroad in parallel, presided by Puigdemont, as well as an assembly composed of local officials.

Catalonia is one of Spain's richest regions, with 7.5 million people.

It has its own distinct language and cultural traditions.

Calls have increased in recent years for it to have more control over its finances, with some demanding outright independence.

After the brief declaration of independence, Rajoy imposed direct rule on Catalonia and called snap regional elections in December.

Separatist parties won those but all the leadership candidates picked by the separatist camp have fallen flat. They are either in self-exile like Puigdemont, or in jail over their role in the secession bid.

Torra faces divisions within the separatist camp, composed of the CUP, the leftwing ERC party and Puigdemont's Together for Catalonia grouping, according to Antonio Barroso, deputy research director at Teneo Intelligence.

Barroso said the ERC wants a moderate approach to avoid a clampdown by Madrid and to play a longer independence game.

"In contrast, Puigdemont's strategy is to continue using every opportunity... to continue challenging the Spanish authorities and keep the secessionist momentum alive."

For Oriol Bartomeus, politics professor at Barcelona Autonomous University, the region risks having "a divided government -- there could be fallout."