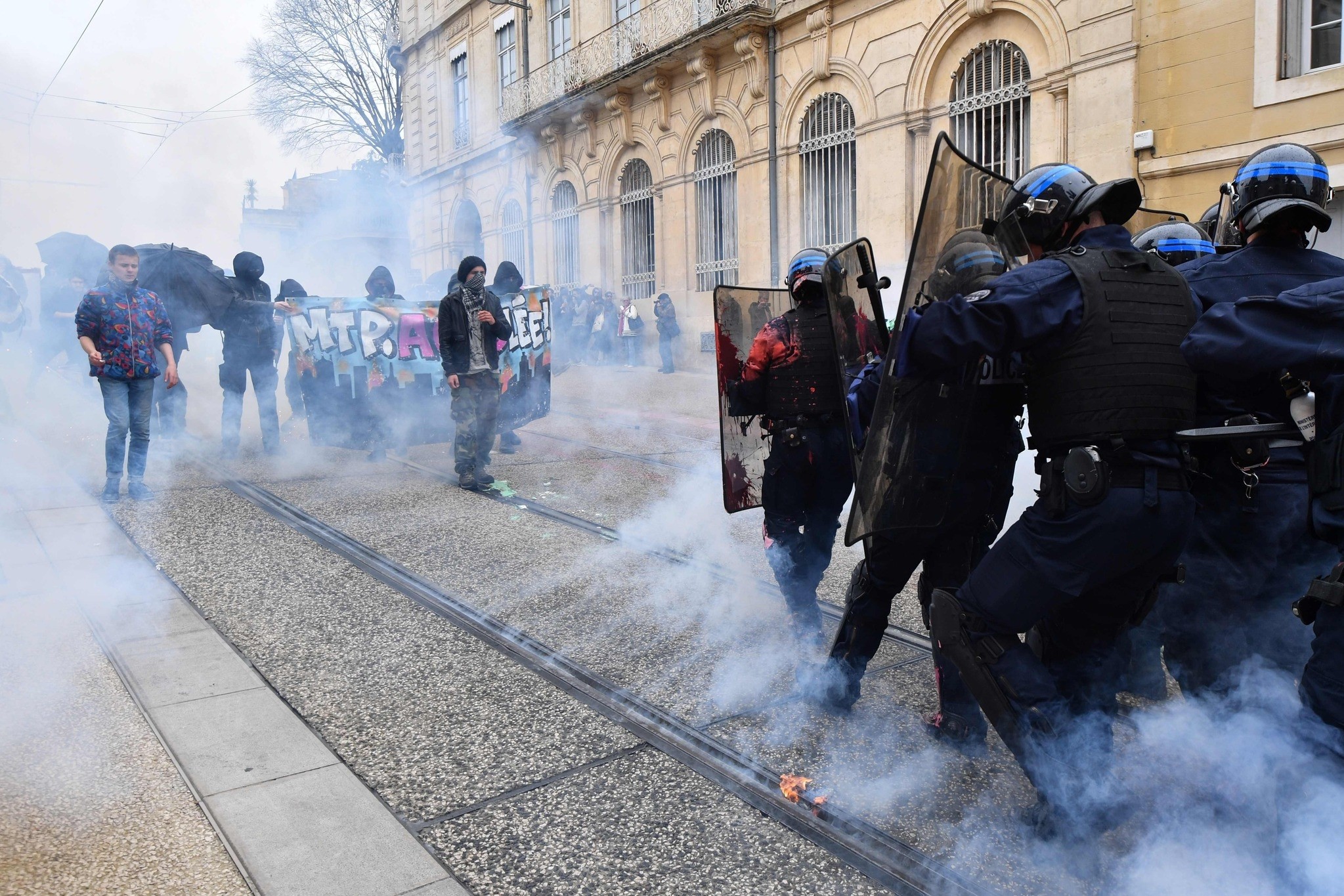 Demonstrators clash with anti-riot police officers during a student protest against the planned reforms of the French government, Montpellier, May 14.
by Compiled from Wire Services May 15, 2018 12:00 am

Hundreds of French students saw their end-of-term exams suspended Monday as protesters blocked access to two universities, the latest in months of demonstrations against the government's plans to introduce more selective admission requirements.

Tests were cancelled for some 800 students in the southeastern city of Lyon after about 300 protesters formed a human chain at two sites of the Lyon 2 university, officials said.

In the southern port city of Marseille, meanwhile, police moved in to remove an estimated 60 to 80 students blocking access to the law and economy faculties of the Aix-Marseille University.

Shortly afterward the protesting students were joined by about 30 rail and dockers' union activists as they squared off against police. Officials suspended tests scheduled for roughly 700 students given the risk of "disturbing the public order."

Elsewhere, police evacuated protesters at a university in the western city of Rennes, an operation carried out "calmly and without any incidents," the school's president Olivier David said, as reported by AFP.

The education ministry has vowed to ensure that year-end exams will take place despite the blockades. It said Monday that the protests appeared to be winding down, with only Nanterre

still completely blocked, compared with four universities at the height of the protests.

University of Paris 8 in the suburb of Saint-Denis remains partly shut down, as do four other sites across France (Limoges, Marseille and two Sorbonne sites in Paris), which is "just half the number of two weeks ago," the ministry said.

Last week, scores of protesters converged on an exam site in the Paris suburb of Arcueil and formed a human chain to prevent students from entering.

Riot police moved in, but university authorities delayed the exams because of the tensions.

For the far-left students who dominated the sit-ins for the last couple of days, the protests are about much more than education, they have echoes of the momentous French university sit-ins that spurred a social revolution exactly 50 years ago, in May 1968.

Protests blocked 700 students from sitting in an exam in Strasbourg last week, and in Nancy police had to intervene to allow students to get in to an English test.

Dozens of sites have been fully or partially blocked or occupied since the beginning of the year to protest government plans for stricter entry requirements, a key element of President Emmanuel Macron's wide-ranging reform drive.

Macron's presidency has been challenged on multiple fronts, as a joint show of force by anti-Macron groups including students and labor unions sought to broaden resistance to hard-hitting reforms.

However, the centrist president has repeatedly said he won't cave in under pressure, arguing that he was elected president last year to reform the country.

Pressure has been mounting on Macron nearly a year since the 40-year-old swept to power, with a survey by Ifop-Fiducial released last month, suggesting that 58 percent of voters were unhappy with his presidency.