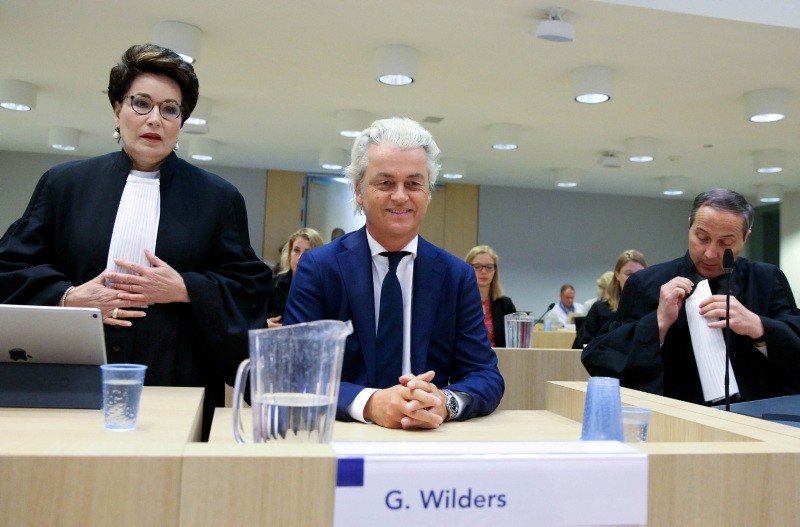 Dutch anti-Islam politician Geert Wilders appears in court for his appeal against a conviction for inciting discrimination, accusing prosecutors of trying to destroy his right to free speech, in Amsterdam, Netherlands May 17, 2018. (Reuters Photo)
by May 17, 2018 12:00 am

Far-right and anti-Islam Dutch politician Geert Wilders declared Thursday his intention to hold a contest for cartoons depicting Prophet Mohammad, a blasphemous act for Muslims, the very same day he was back in court appealing his 2016 conviction for discrimination.

The far-right MP listened intently in the high-security court building near Schiphol airport as his lawyer urged judges at the opening to postpone the case, which Wilders has dubbed his "appeal witch-hunt trial".

After a three-week trial, judges in December 2016 found Wilders guilty of discrimination against Moroccans during a 2014 election rally, when he asked supporters whether they wanted "fewer or more Moroccans in your city and in the Netherlands."

Some 6,400 people, many of them Moroccan immigrants, complained about his comments to the prosecution.

The judges ruled that due to "the inflammatory nature in which the statements were made, others were encouraged to discriminate against people of Moroccan origin." But they added there was "insufficient evidence" to find that his words amounted to incitement to hatred and acquitted him of hate speech. They also did not impose any sentence or fine.

Prosecutors are also appealing and the judges have allocated 11 days for the appeal. The verdict is due to be handed down on July 6. But Wilders's lawyer Geert-Jan Knoops called Thursday for the case to be postponed.

He argued his client was not being given "a fair trial" after prosecutors refused to probe Democracy party D66 leader Alexander Pechtold for recent critical comments against Russians.

About 40 people -- mostly Dutch with Russian roots -- complained to the prosecution service after Pechtold told the public broadcaster NOS in February: "I've still yet to meet a Russian who admits his mistakes."

Pechtold was commenting after the shock resignation of the foreign minister who admitted lying about attending a meeting with Russian President Vladimir Putin.

"The comments by Mr Pechtold and Mr Wilders are legally comparable," said Knoops. "If one of them is prosecuted, the other should be as well."

He urged judges to postpone the Wilders case so they could examine the situation around Pechtold further. NOS said the court would rule on the request later Thursday.

After the 2016 verdict was handed down, Wilders vowed he would never stay silent, and has remained true to his word.

"Freedom of speech is under attack, especially for Islam critics. We may never accept that," he said in a tweet early Thursday.

He accompanied the tweet with a cartoon of himself standing outside a cell, watching an angry turban-wearing man inside, and likely meant to represent the Prophet Mohammed.

And in another inflammatory move, he announced he was planning to organize a "Mohammed-cartoon contest later this year in the Dutch parliament with the world famous cartoonist and ex-Muslim Bosch Fawstin."

He added that during the court's lunch break, an anti-Islam clip he has made entitled "Islam is Deadly" would broadcast on national television.

A media-savvy politician, Wilders has used the court case and conviction to boost his image and popularity in the Netherlands.

In line with other recent swings to the far-right in Europe, and following the election of U.S. maverick Republican President Donald Trump, the fortunes of his Freedom Party (PPV) have soared.

Wilders put forward a fiery platform in the country's 2017 general elections, vowing to close mosques, ban sales of the Quran and halt the immigration of Muslim refugees.

His PVV party came in second behind the Liberal VVD party of Prime Minister Mark Rutte and Wilders now heads the biggest opposition party in the Dutch lower house of parliament.

His success was repeated in municipal polls this year, when his party also won seats in some 20 local councils, more than ever before.

Last month Wilders said his PVV was working on a bill to go before the Dutch parliament to pass "legislation to outlaw as much Islam as possible."