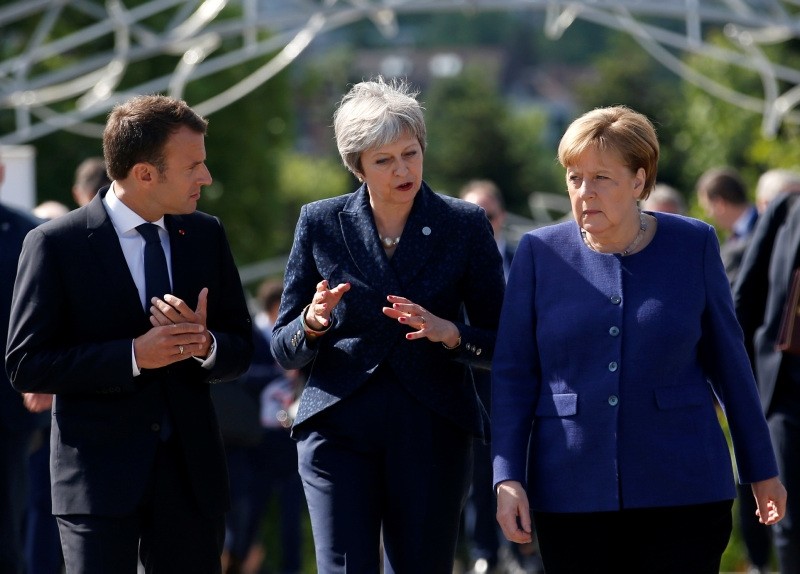 German Chancellor Angela Merkel, right, speaks with French President Emmanuel Macron, left, and British Prime Minister Theresa May after meeting at a hotel on the sidelines of the EU-Western Balkans summit in Sofia, May 17, 2018. (AP Photo)
by Compiled from Wire Services May 17, 2018 12:00 am

British Prime Minister Theresa May denied on Thursday she was "climbing down" on plans to leave the EU customs union.

Asked about reports that her government would ask Brussels to stay in the European Union's customs area beyond the end of a post-Brexit transition period in 2020, she told reporters at an EU summit in Bulgaria:

She said these were that Britain should have its own trade policy with the rest of the world, should have frictionless trade with the EU and that there be no "hard border" with Ireland.

The Telegraph newspaper reported earlier that a cabinet sub-committee this week agreed Britain would stay aligned to EU rules, possibly until two years after the transition phase ends in December 2020.

Britain is due to leave the European Union in March 2019 but continue the current trading arrangements during the transition, to give time for the two sides to agree the terms of a new partnership.

There are growing concerns, however, that any new customs system will not be in place before then -- not least because May's government has yet to decide on what arrangements it wants.

The idea of a further period of transition has been been mooted in recent weeks by May's former chief of staff, Nick Timothy, her former deputy Damian Green, and business secretary Greg Clark.

Downing Street repeatedly said that Britain will be leaving the customs union after the transition ends, although May herself on Thursday gave no date.

The suggestion of a "softer" Brexit lifted the pound overnight, according to Jasper Lawler, head of research at London Capital Group, an online trading platform.

"Should the report be confirmed as true then this rally could have a lot further to go, but right now traders are awaiting some form of confirmation."

But hardline eurosceptics are unhappy, with leading Conservative MP Jacob Rees-Mogg telling the Telegraph: "People voted to leave, they did not vote for purgatory."

The government has promised to reduce as much as possible any border checks on goods going in and out of the EU, and also to avoid any "hard" frontier between Northern Ireland and EU-member Ireland.

At the same time, Britain wants to be able to forge its own trade deals with non-EU countries, meaning it will not accept common external EU tariffs.

But ministers have yet to find a solution, and even those on offer could take years to implement.

The Telegraph said that one of the options gaining support, which would use technology to ease border checks, may not be in place until 2023 -- suggesting the transition could be extended for two years.

May is under intense pressure to resolve the issue, after agreeing a "backstop" solution with the EU that would see Northern Ireland stick with the bloc's customs arrangements if no alternative is found.

She has said it would be unthinkable to divide the nation off from the rest of Britain, insisting that any new trade rules must apply to the whole country.