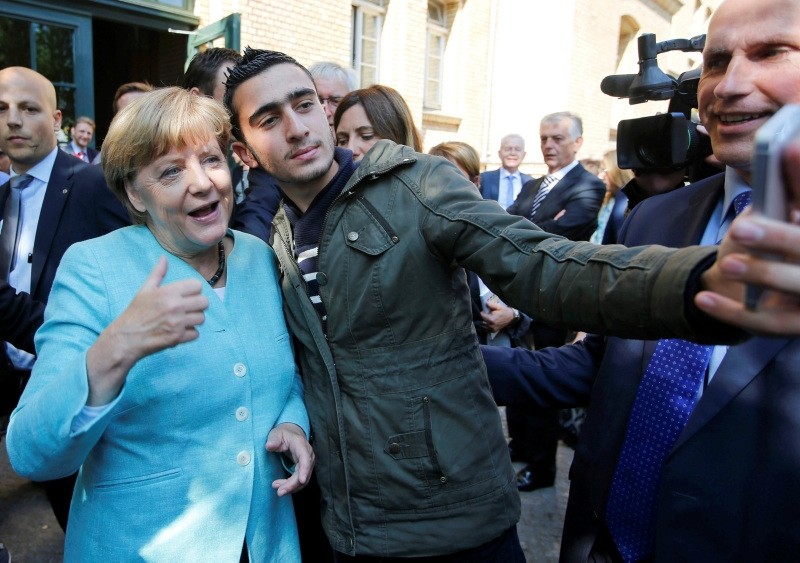 A migrant takes a selfie with German Chancellor Angela Merkel outside a refugee camp near the Federal Office for Migration and Refugees after registration at Berlin's Spandau district, Germany, September 10, 2015. (Reuters Photo)
by May 18, 2018 12:00 am

German Chancellor Angela Merkel's open door policy toward refugees is a violation of the country's constitution, the far-right Alternative for Germany (AfD) party argued as it announced a lawsuit it had filed with the country's supreme court.

Merkel's 2015 decision to open Germany's borders to a stream of refugees — many who traveled from war zones like Afghanistan and Syria before accessing Europe through Turkey and Greece — has left the country's politics unsettled since, as the country attempts to integrate so many newcomers.

While popular in some circles, it has also led to reactionary policies and a surge in support for populist groups like the AfD, members of which said Friday they filed the lawsuit to expose the "tyranny of the unjust."

The party's legal adviser said the suit was filed on April 14, but only announced Friday.

"This lawsuit could change the world. And it will change the world if it's successful," said Stephan Brandner, who argued that Merkel would have to immediately step down if the ruling went against her.

It is not clear, however, if the court will take up the case.

Juergen Braun, a parliamentary leader, said the point is that Germany cannot have a dictatorial leader. Instead, Germany's leader must stick to the law and allow key decisions — such as one to open borders — to be decided by the legislature.

He called the 2015 decision "the tyranny of arbitrariness and illegality."

Interior Minister Horst Seehofer, who was until recently the premier of the southern state of Bavaria and is still head of the Christian Social Union (CSU), a sister party to Merkel's Christian Democrats (CDU), has also used such language to describe her decision.

"We're following through what Seehofer said, but never acted on," said Brandner, noting that Germany has been acting in a state of emergency for years because of her move, which he said was a massive undermining of the Bundestag's powers.