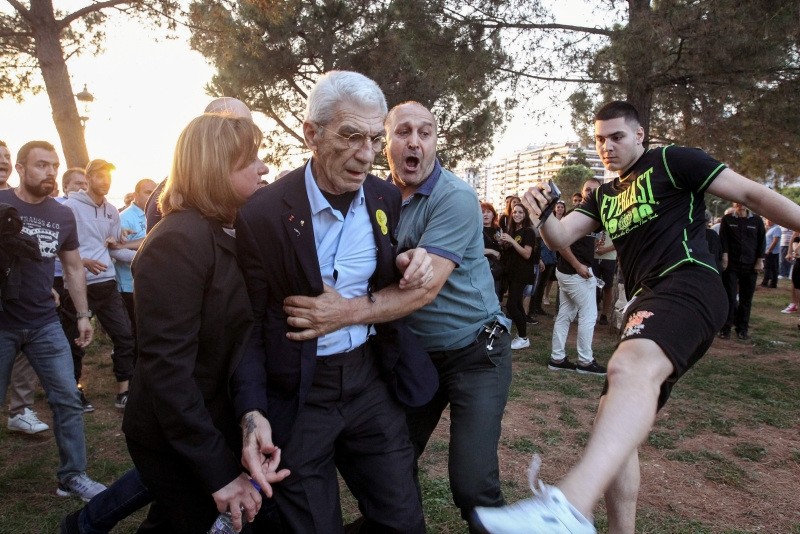 The mayor of Greeceu2019s second city, Thessaloniki, Yiannis Boutaris (C) is helped as he is assulted by suspected far-right members at a rally in Thessaloniki on May 19, 2018. (AFP Photo)
by Daily Sabah with Agencies
May 21, 2018 12:00 am

Greek police said on Monday that they have arrested four suspected far-right extremists in connection with the assault on the liberal Thessaloniki Mayor Yiannis Boutaris.

One of the arrested had confessed to taking part in the verbal and physical assault on Saturday in which Boutaris was slightly injured.

The Greek government and all parliamentary parties, except the far-right Golden Dawn, condemned the attack and called for those responsible to be brought to justice.

Boutaris was attacked during a memorial for ethnic Greeks killed by Turks in the Black Sea area in the early 20th century. The memorial is held on May 19, officially celebrated as the Youth and Sports Day in Turkey to mark the Republic's founder Mustafa Kemal Atatürk's landing in Black Sea of Samsun in 1919 to launch the War of Independence against occupying Allied forces.

The memorial in Greece is traditionally attended by the families of the victims and rightist sympathizers.

The mayor was verbally attacked, thrown to the ground and kicked all over his body.

"I lived a nightmare," the 75-year-old Boutaris said after he was discharged from the hospital Sunday. "They were hitting me all over, with fists and feet."

Boutaris finally had bottles thrown at him before he was assisted by a policeman to flee. Attackers chased him to his vehicle, hitting the doors and windows.

The mayor was in a state of shock when he arrived at the hospital where he was treated for a leg injury and bruises, Ippokratio General Hospital director Vana Papachristodoulou said.

"He wanted to leave immediately, but we insisted and kept him overnight," she said.

One of the detained suspects is a 36 year old with previous arrests for robbery, police said. The other, a 20 year old, confessed, saying he was angered by a statement Boutaris recently made favoring friendlier relations with Turkey, police said.

Altogether, the arrested for taking part in the attack are so far in four. These are two 20-year-olds, a 36-year-old and a 17-year-old, who have filed a case file for disturbing joint peace, unprovoked bodily harm, and occasionally for disastrous damage, and are led to a criminal prosecutor with the spontaneous process.

Boutaris is a liberal who supports a relaxation of traditionally poor ties with Turkey, minority and LGBT rights and boasts about the multicultural nature of Greece's second-largest city.

Some Greeks with right-wing and far-right views praised the attack on social media. The mayor of Mycenae-Argos, who is a member of the center-right opposition party New Democracy, tweeted "This is the fate of the traitors," with "traitors" written all in capital letters.

Boutaris, a winemaker who was elected Thessaloniki's mayor in 2010 on a center-left ticket that ended the city's 24 years of conservative rule, is reviled by extreme nationalists.

The mayor's supporters are organizing a rally for Wednesday night at the site of the attack, next to the city's iconic White Tower, a 16th-century remnant of Turkish fortifications.

"All of us who believe in democracy and debate, let us gather in the White Tower," they said in a statement.

Aegean port city of Thessaloniki was among the largest cities of the Ottoman Empire and its economic and cultural hub in the Balkans until its loss to Greece in 1912. The city was once home to a large Turkish-Muslim and Sephardic Jewish community that made up some two-thirds of the city's population. Atatürk, along with many other prominent soldiers and bureaucrats in the late Ottoman era, was born in Thessaloniki in 1881. The house where he was born is still being preserved as a museum in the compound of the Turkish consulate in the former Muslim quarter of Thessaloniki.

Over the recent years, Thessaloniki has witnessed a boom of Turkish tourists, especially from Istanbul and Thrace due to its proximity.