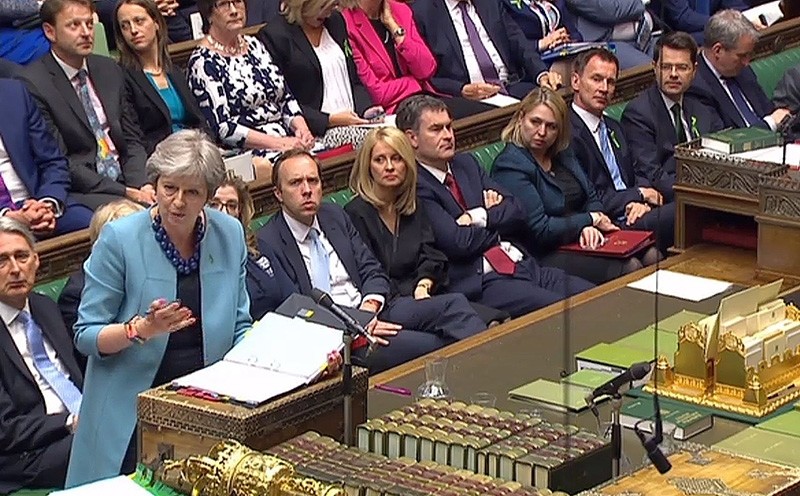 A video grab from footage broadcast by the UK Parliament's Parliamentary Recording Unit (PRU) shows Britain's Prime Minister Theresa May as she speaks during Prime Minister's Questions (PMQs) in the House of Commons on May 16, 2018. (AFP Photo)
by Compiled from Wire Services May 21, 2018 12:00 am

The Kremlin on Monday accused Britain of unprecedented "anti-Russian mania," warning such an attitude could backfire and scare off other foreign investors.

British MPs on Monday released a hard-hitting report accusing Russian President Vladimir Putin and his allies of "hiding and laundering their corrupt assets in London."

"We are witnessing Britain's rather unprecedented anti-Russian mania which is manifested in various ways," Putin's spokesman Dmitry Peskov told reporters.

"I have no doubt that such actions won't go unnoticed by investors from other countries," he added.

"Many countries are working to improve their investment attractiveness and this I believe is a step in the opposite direction."

A spokesman for Prime Minister Theresa May said Monday that Britain is determined to tackle the problem of illicit money flows.

"The U.K. has taken a leading role in the global fight against illicit finance, and criminals should be in no doubt that we will come for them, their assets and their money," he told reporters in response to the report.

"We are determined to drive dirty money and the money launderers out of the U.K. and we will use all the powers we have ... to clamp down on those who threaten our security," he said adding that since the Proceeds of Crime Act was introduced 2.2 billion pounds ($2.95 billion) has been taken off criminals.

The House of Commons foreign affairs committee urged the British government to clamp down on corrupt Russian money flowing through London and urged Britain to encourage global action to tighten loopholes in the existing sanctions regime.

Recent media reports said Chelsea football club owner Roman Abramovich's British visa has run out and the application process for a new visa has been taking longer than usual.

Peskov said he was not aware of the issue but said many Russian businessmen were treated unfairly.

May expelled diplomats and vowed new measures against human rights offenders after a nerve agent attack in Salisbury that London blamed on Moscow.

Moscow has furiously denied the claim, suggesting at various points it has been set up by British security services.