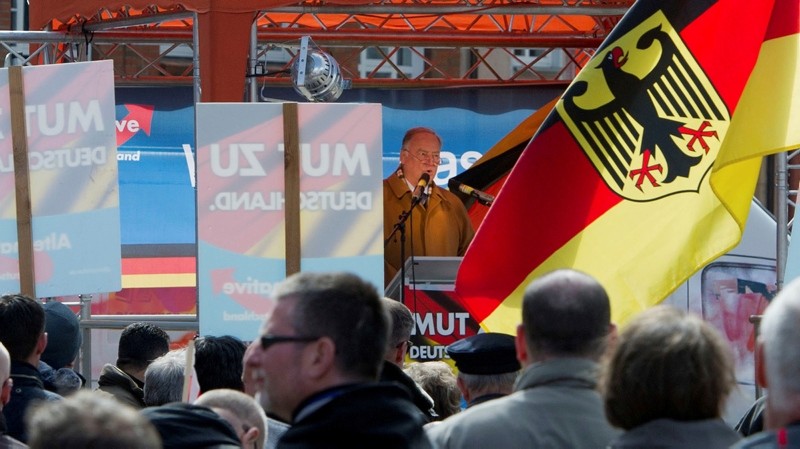 More than a dozen groups are planning weekend protests against a rally by the right-wing nationalist party Alternative for Germany being staged under the motto "Germany's Future," police said Wednesday.

Officials from the party, known by its German abbreviation AfD, have told authorities they expect up to 10,000 people for the Sunday afternoon rally with speeches from some of its top leaders.

It is due to start at the capital's main train station and end at the landmark Brandenburg Gate but organizers are keeping the exact route — including whether their march will pass by Chancellor Angela Merkel's chancellery or parliamentary offices — under wraps for security reasons.

So far, 13 counter-demonstrations are planned in nearby areas and around the city under slogans like "never again" and "stop the hate, stop the AfD."

Right-wing demonstrations in Germany are often dwarfed by counter-demonstrations and can sometimes turn violent. For security reasons police are not announcing in advance how many officers they will have on hand to keep the two sides separate, but say there will be a significant presence.

Georg Pazderski, head of the AfD's Berlin branch and deputy leader nationally, said the rally would highlight a laundry list of issues the party maintains are tied to the large number of migrants who entered Germany in 2015-16, including overcrowded pre-schools, a housing shortage and rising rents.

"Berlin reflects the problems of our country," he told reporters in explaining the decision to hold the rally in the capital.

The AfD took seats in Germany's national parliament for the first time in September, winning about 13 percent of the vote to make them the third strongest party. The latest polls show them steady with around that same support.

Still, questions have arisen about the party's ability to attract the numbers hoped for in Berlin. One regional AfD leader floated the idea of paying supporters to travel to the capital for the rally, after the offer of a charter bus garnered little interest.

AfD rally organizers downplayed the plan as simply the suggestion of one party member, rejecting the idea of paying demonstrators as something allegedly done by "the other side of the political spectrum."

"With us, people take to the streets because circumstances compel them to," said Steffen Koeniger, a member of AfD's federal leadership.

Still, Guido Reil, another member of the leadership, said that many supporters do not want to be visibly associated with the party, and that the rally could attract as few as 2,500 people — and with 5,000 they'd consider it a success.

"We have a problem with civil courage in this country," he said.

With its anti-migrant nationalist stance, AfD has attracted support from neo-Nazis and other extreme right groups. While Pazderski said those elements are "not welcome" at the rally, he said he expects at least "one or the other" person will smuggle banned flags into the demonstration.