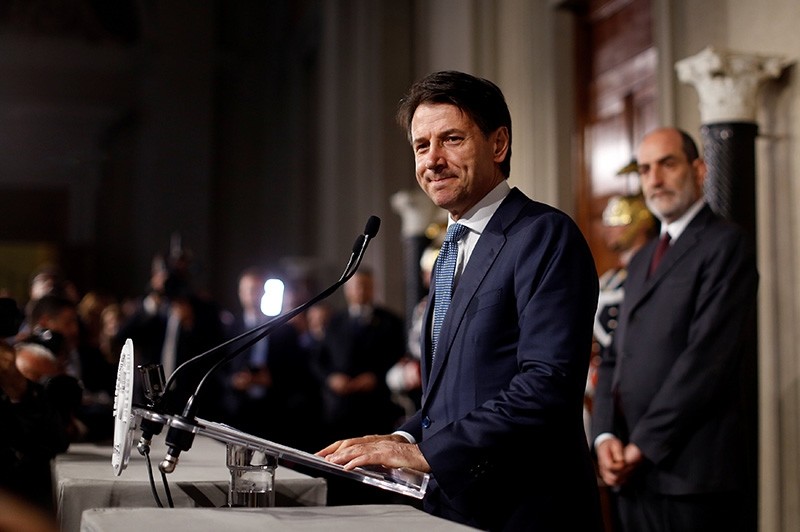 Newly appointed Italy Prime Minister Giuseppe Conte speaks to the media after the consultation with the Italian President Sergio Mattarella at the Quirinal Palace in Rome, Italy, May 23, 2018. (Reuters Photo)
by French Press Agency - AFP May 23, 2018 12:00 am

Italy's president on Wednesday approved little-known lawyer Giuseppe Conte's nomination to be prime minister of a government formed by far-right and anti-establishment parties.

"I'm aware of the necessity to confirm Italy's place, both in Europe and internationally," Conte said Wednesday after being approved as prime minister by President Sergio Mattarella.

Conte's appointment could herald an end to more than two months of political uncertainty in the eurozone's third-biggest economy -- but the coalition's eurosceptic and anti-immigrant stance has alarmed senior European officials.

Mattarella met on Wednesday afternoon with Conte, "to whom he gave the mandate to form a government," said Ugo Zampetti, General Secretary of the Italian presidency.

The talks with the president had been delayed amid a furor over claims that Conte had exaggerated his academic experience on his CV.

He must now finalize his cabinet, which has been the subject of days of tough negotiations between the anti-establishment Five Star Movement and the far-right League.

The list of ministerial candidates must then be endorsed by head-of-state Mattarella before it can seek parliamentary approval.

Mattarella was reportedly concerned about the plan to name Paolo Savona as economy minister.

Minister for industry between 1993-94, Savona, 81, was staunchly opposed to the signing of the Maastricht Treaty and has said he considers the euro currency a "German cage."

The joint government programme unveiled by the parties on Friday pledges significant anti-austerity measures such as drastic tax cuts, a monthly basic income and pension reform rollbacks, which Di Maio and Salvini claim will boost growth.

But it poses a headache for EU officials who are nervous about the prospective coalition government's eurosceptic stance.

EU officials have voiced concern that Italy could trigger a new eurozone crisis by refusing to stick to public spending and debt targets set by Brussels.

Pierre Moscovici, the EU Economic Affairs Commissioner, said on Wednesday that Italy must deliver a "credible" response on how it will reduce its debt, the eurozone's second largest in proportion to GDP.

The difference in yield on Italian 10-year sovereign bonds compared to Germany's has increased 60 base points to 191 in just eight days -- a sign of increasing investor concern for Italy's financial stability.

The government program also plans to speed up expulsions of illegal immigrants and crack down on trafficking.

Nearly 700,000 people have landed in Italy since the migrant crisis exploded in 2013.

European Commission president Jean-Claude Juncker told reporters in Brussels: "We judge governments as governments not on what they announce but on what they will do. But we remain attentive to safeguard the rights of the Africans who are in Italy."

Almost immediately after being named as candidate for PM by the parties, Conte was plunged into scandal over doubts about his claims to have studied at some of the world's top universities.

In a CV posted on the website of a lawyers' association, Conte said that he "furthered his juridical studies" at Yale, New York University (NYU), Duquesne University in Pittsburgh, the Sorbonne in Paris, and Cambridge.

NYU told AFP that their records did not "reflect Giuseppe Conte having been at the university as a student or having an appointment as a faculty member."

It said he was granted permission to conduct research in the institution's law library between 2008 and 2014.

Duquesne University told AFP he attended as part of an affiliation with Villa Nazareth, an exchange program, and did legal research but "was not enrolled as a student."

Conte has yet to speak out publicly about the affair, but has been staunchly defended by both Di Maio and Salvini.

Salvini said Italy should "go back to the polls" if their proposed government did not get the go-ahead.